Leigh Griffiths came off the bench to grab a late winner, as Celtic overcame a stubborn Rosenborg to win their opening Europa League group match.

Griffiths headed home Dedryck Boyata's knockdown on 88 minutes to end a night of frustration for Brendan Rodgers' side and send an impatient home crowd wild, as Celtic joined Salzburg at the top of Group B.

Celtic had beaten Rosenborg comfortably over two legs in Champions League qualifying, winning 3-1 at Celtic Park in July, but in the first half they struggled to find a spark, perhaps in part due to the improvement of their opponents. The Norwegian champions were unbeaten in 10 games since the second-leg draw between the sides in Trondheim, but they were without the injured Nicklas Bendtner in attack.

Instead it was Issam Jebali who was Rosenborg's greatest source of creativity. The Tunisian winger wriggled clear of Mikael Lustig inside the box on 14 minutes before going to ground - only to be shown a yellow card for simulation by the Polish referee. Replays suggested slight contact with Lustig's trailing leg clipping Jebali.

Celtic's possession counted for nothing in terms of attempts in the opening 20 minutes, before Lustig headed a corner straight at Hansen. A minute later, Celtic broke at speed with Rogic; his through ball found Edouard, who fired over on the angle while off balance.

Mikael Lustig replaced Kristoffer Ajer who was out due to illness. Filip Benkovic made his European debut.

Nicklas Bendtner was not in the Rosenborg squad due to a thigh strain.

Rosenborg had taken the lead at Celtic Park two months previously, and had an opportunity to do so again when a mistake by Boyata let in Jebali, but he was quickly closed down by the recovering Celtic defence before he could get a clear sight of Craig Gordon's goal.

On 35 minutes, Kieran Tierney broke clear on the left and whipped a fabulous cross into the area, but out of the reach of Edouard and James Forrest, with Birger Meling narrowly avoiding turning the ball into his own goal.

After being starved of space for much of the half, Celtic - and Tierney in particular - began to exploit gaps on the flanks as they pushed Rosenborg deeper. Hansen was forced into a superb double save just before half-time, as he first denied Rogic, and then the on-rushing Edouard, tipping the Frenchman's effort onto the post and behind.

Rogic broke clear again shortly after half-time, but his shot from 20 yards was straight at Hansen. Rodgers had seen enough, and replaced Forrest and Rogic after 57 minutes with Scott Sinclair and Johnston. The change nearly had an immediate impact, as Sinclair was left unmarked in the box to meet Johnston's cross, but his acrobatic effort from the penalty spot was wide of the far post.

As rain fell, Griffiths was introduced for Edouard to tumultuous applause. Soon after, Callum McGregor fired a shot wide from 20 yards as Celtic raised the tempo further - yet they still lacked a cutting edge. That was illustrated again when Tierney, now causing mayhem on the left flank, crossed for the unmarked Johnston, but he somehow contrived to scoop the ball over with Hansen scrambling. 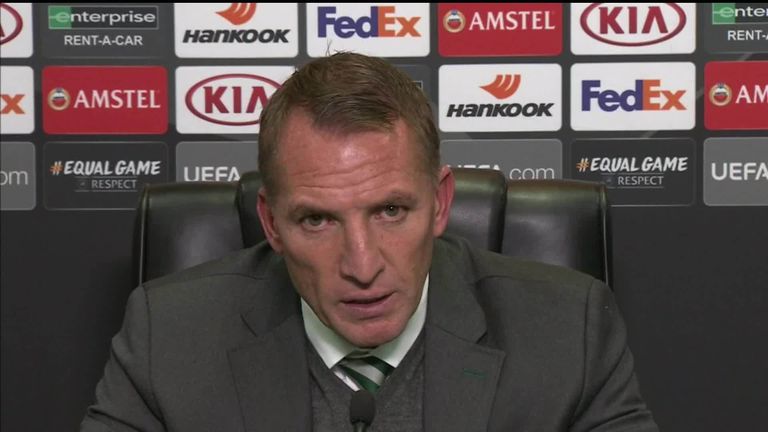 Brendan Rodgers was delighted with a 'great' win for Celtic

But with three minutes left, Scott Brown drove a lofted pass into Boyata, and his knockdown found Griffiths in space to head past Hansen, lifting the gloom that had been descending on Celtic Park.

On a night where plenty of Celtic players were not at their best, Tierney still put in an impressive display and was one of the more dangerous attacking outlets for the hosts.

He constantly caused Yann Erik de-Lanlay and Vegar Hedenstad problems down the wing and put in a handful of dangerous crosses that may well have been converted on another night.