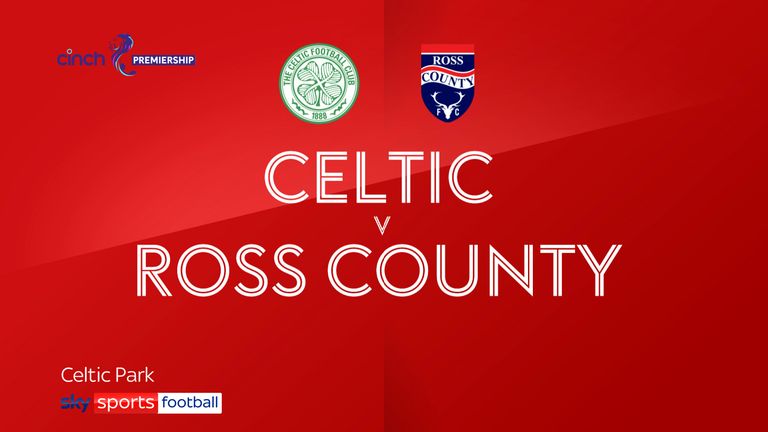 Highlights of the Scottish Premiership clash between Celtic and Ross County.

Israel winger Liel Abada twice hit the woodwork in a goalless first half, but in the 64th minute debutant defender Cameron Carter-Vickers opened the scoring with a deflected strike which finished up behind Staggies keeper Ross Laidlaw.

Then two close-range headers from returning Switzerland striker Ajeti, in for the injured Kyogo Furuhashi, ensured Ange Postecoglou's side would take all three points.

The Parkhead club announced on Friday that chief executive Dominic McKay had left the club for personal reasons just months after taking over from Peter Lawwell.

That news came as a shock to the Hoops fans, but they will be more concerned with on-field matters and glad to get the victory after a sloppy first hour or so where frustrations had grown.

Postecoglou was working with a new-look Hoops squad shorn of attackers Odsonne Edouard, Leigh Griffiths and Ryan Christie, who left during the transfer window.

There were debuts for Portuguese winger Jota, on loan from Benfica, and United States defender Carter-Vickers, on loan from Tottenham.

With Furuhashi injured, fringe forward Ajeti was pitched in, with Greg Taylor and Tom Rogic also back in the side.

County boss Malky Mackay had rejuvenated his squad during the summer and he had forward Alex Samuel making his debut and Jack Baldwin and Jack Burroughs in for their first starts, and they helped the visitors restrain Celtic in the first half.

In the 16th minute, Rogic set up Abada with a clever pass inside Ben Paton and the winger's shot from the angle was palmed on to the crossbar by Laidlaw, the ball flying to safety.

In the 23rd minute, Celtic skipper Callum McGregor sent Ajeti racing down the left channel but his weak and unconvincing shot was easily saved by Laidlaw.

Midfielder David Turnbull hit the side netting with a drive, but as County broke with belief and purpose, skipper Blair Spittal's delivery from the right sped across Joe Hart's box with Ross Callachan inches away from connecting.

Again the home side came close in the 37th minute when Abada's shot deflected on to the bar and over, the corner coming to nothing, before he missed the target at the back post from a Rogic pass, with the impressive Jota finishing the half by testing Laidlaw with a long-range drive.

Celtic kept pushing forward but too often the final ball was amiss or the finishing poor.

There was more than a stroke of luck about Carter-Vickers' goal, the burly defender stepping forward and trying his luck from 30 yards, with his drive hitting Callachan before looping over Laidlaw and into the net.

County now had to push forward and minutes later Hart had to make a fantastic save from substitute Dominic Samuel's close-range header.

However, Ajeti showed how it should be done when he gave Laidlaw no chance from Abada's cross from the right for his first goal since February. And, with that, County's hopes of a positive result disappeared.

Ajeti grabbed his second with five minutes remaining when he headed in from two yards, after substitute James McCarthy had headed a Turnbull cross against the crossbar.

Celtic boss Ange Postecoglou: "The result was positive. The performance was OK, we started really well and just needed a goal.

"In these games, if you don't score early it gives encouragement to the opposition and they hung in there and defended well at times.

"I've got to keep things in perspective. We're giving guys debuts and it was Albian's first start so we're nowhere near as fluent as we can be."

Ross County boss Malky Mackay: "You are coming to play against a top team with some fantastic players in front of 50,000 people but we had a game plan and stuck to it.

"We frustrated them in the first half and I thought we countered well, but when you counter you have to be clinical and you have to score when you have the chances here.

"I was obviously really disappointed with the deflection, which you can't legislate for, and at that point Celtic were looking a little bit frustrated and the crowd were frustrated.

"When that goes in it relaxes them, and at the same time I thought we broke really well at that point and we had a glaring chance when Joe Hart makes the point blank save from Dom (Samuel). These are the fine margins you have to execute here."

Celtic travel to face Real Betis on Thursday in the Europa League group stages (kick-off 7.45pm) before visiting Livingston in the Scottish Premiership next Sunday at 3pm.

Ross County host Hearts next Saturday in the Scottish Premiership at 3pm.