FREE TO WATCH: Highlights from Chelsea's win against Crystal Palace

Premier League debutant Trevoh Chalobah's 25-yard strike was the icing on the cake as Chelsea stormed to a 3-0 opening-day win over Patrick Vieira's Crystal Palace.

The European champions dominated from the first whistle to the last and got their campaign up and running when Marcos Alonso curled in a superb free-kick just before the half hour.

With Palace failing to register a single shot before the break, Chelsea cemented their lead with five minutes of the half remaining through Christian Pulisic, who scored a fifth in five games against the Eagles from a Vicente Guaita save.

The rout was complete just before the hour when Chalobah, driving forward into space, unleashed a powerful low drive which Guaita could only turn onto the post and in to mark a perfect Premier League debut for the 22-year-old.

Things were less rosy for Vieira, whose side took 62 minutes to register their one and only shot on target and who offered little sign of a more progressive future under their new manager - before Tuchel, despite his side's impressive victory, claimed the Blues were 'fourth favourites' to lift the title for the first time in five years.

Man of the match: Marcos Alonso

Newly-crowned Super Cup winners Chelsea have impressed in pre-season and were straight up to tempo from the first whistle, as the task facing Vieira in his first return to the Premier League was quickly laid bare.

Mateo Kovacic's deflected effort provided the first sign of the Palace defence cracking in the wake of the hosts' early dominance but they held their nerve until the 27th minute, when Mason Mount was caught just outside the visitors' box and Alonso left Guaita static with a superb free-kick.

Chelsea's pressure was unrelenting and only some last-ditch defending denied them a second until they cemented their advantage five minutes before the break.

Mount, left in acres of space, delivered a low cross which Guaita palmed back into his six-yard box, where Pulisic was fastest to react and continue his sensational run of scoring against the Eagles.

Vieira, a man who dominated Arsenal's dressing room during their glory days, had his first opportunity to get into his new recruits at half-time but there was little sign of the tide turning once the game restarted, with Alonso denied a second from a tight angle by a smart Guaita save within minutes.

The third would come soon enough, and from an unlikely source. Chalobah, given space and time in the Palace half, took advantage of the comfortable scoreline to power a low drive towards the far corner, where the fingertips of the goalkeeper could only tip his effort onto the post and over the line.

Palace finally stung Edouard Mendy's gloves through a Jordan Ayew header with more than an hour gone with an effort which would prove their only shot on target.

But considering the Eagles managed only 11 touches in the Chelsea box over the entire game, it was little wonder they found chances at such a premium as they were swept aside by Thomas Tuchel's juggernaut side.

Last season, Alonso made fewer Premier League appearances than in any campaign since he joined Chelsea in the wake of Ben Chilwell's arrival. So when given the nod ahead of the England defender, he certainly had a point to prove, and that he did.

By the time he rifled Chelsea into a first-half lead he was already looking their most lively outlet, with an inch-perfect cross nodded at Guaita by Pulisic. And he continued to shine after his goal, coming close to scoring a second after half-time while also making four tackles, behind only Cesar Azpilicueta and Jorginho.

Merson: The performance of potential champions 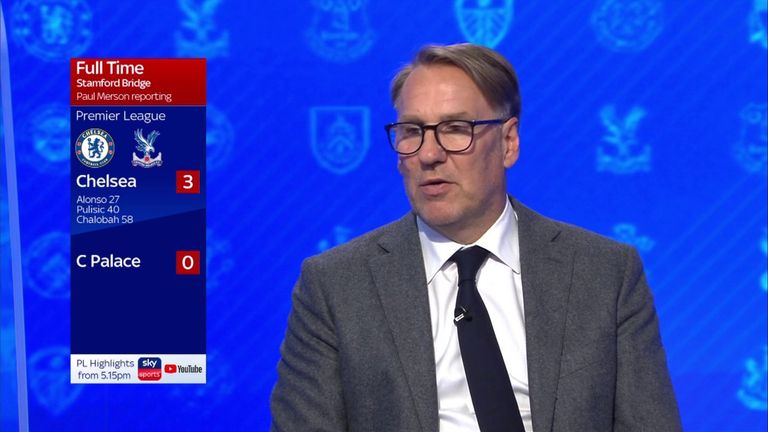 After a 3-0 romp over Crystal Palace in their opening Premier League game, Chelsea have already shown they are potential Premier League champions, according to Soccer Saturday's Paul Merson.

"Was it the performance of potential champions? 100 per cent. I thought Chelsea were absolutely outstanding. When you're far superior all over the pitch, it's all about attitude and they were really professional. Their movement, their interchange - everyone wanted the ball - and they defended well when they needed to.

"Great finish from Alonso, Pulisic was very lively and Chalobah - wow. He was phenomenal. And now they've got Lukaku. How will [Tuchel] fit the players in? It's a good headache to have. They've got players for every position. Vieira will have seen the gulf. Palace were a millions miles behind Chelsea."

Trevoh Chalobah spoke of his delight at his "dream" Chelsea breakthrough after marking his Premier League debut with a stunning long-range goal.

The academy graduate, who spent last season on loan with French side Lorient, kept his place in the side having impressed in the Super Cup victory over Villarreal and produced another assured performance as Thomas Tuchel's side beat Crystal Palace.

"It's a dream for a young boy like me, being here since nine years old, to get the chance to play for my boyhood club," the central defender told Sky Sports News.

On his goal, Chelsea's third of the afternoon, he added: "As I was getting close to the box, I decided I might as well shoot because I had the space.

"I never knew the ball went in! When you hear the crowd, oh wow. I didn't know what to do. I was just over the moon that it went in.

"When I hit it, I knew I'd hit it cleanly, then the rest takes care of itself."

Chelsea travel to Arsenal live on Sky Sports Premier League as part of Super Sunday on August 22 from 4pm; Kick-off at 4.30pm.

Crystal Palace's first home game of the season is another London derby against Premier League new boys Brentford on August 21; Kick-off at 3pm.