Match report and highlights as Chelsea claim only their second win in 10 matches thanks to Kai Havertz's second-half header; Kepa Arrizabalaga made several strong saves to preserve the hosts' clean sheet; Chelsea remain 10th in the Premier League, while Crystal Palace are 12th 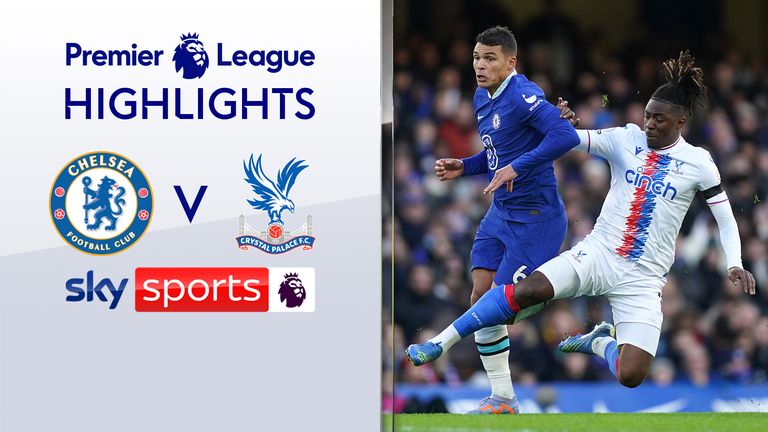 Highlights from Chelsea's win over Crystal Palace in the Premier League

Kai Havertz's second-half header saw Chelsea edge their way to a nervy 1-0 win against Crystal Palace that eased the pressure on the embattled Graham Potter.

Neither side entered the contest with any form to speak of, with the scrutiny on Potter after just one win in eight games, while the visitors had only a single victory in their previous six matches.

A cagey and nervous affair could have perhaps been expected then, but both teams instead played out an entertaining first half in which Vicente Guaita and Kepa Arrizabalaga were called into action on several occasions.

The nerves started to show themselves in a bad-tempered second period, but it was Chelsea who claimed all three points thanks to Havertz's towering header (64), with the Blues now 10th, six points clear of the 12th-placed Eagles.

Player of the match: Kepa Arrizabalaga

The atmosphere at Stamford Bridge has been understandably muted in recent months amid Chelsea’s troubling form, but the home supporters were in full voice ahead of kick-off as they paid tribute to former player and manager Gianluca Vialli following his death earlier this month. 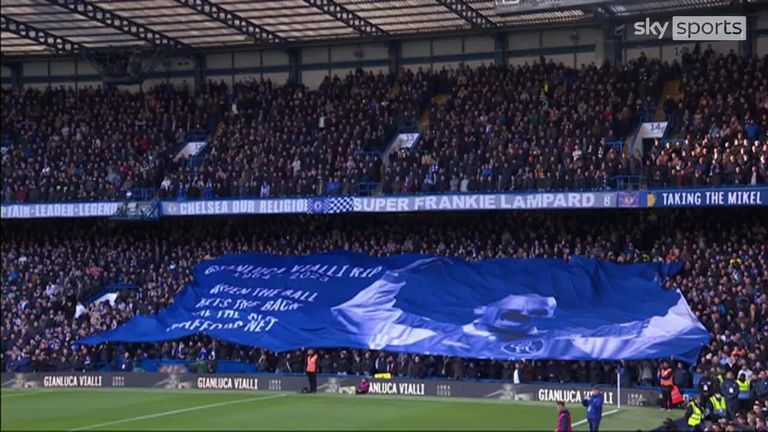 Chelsea fans, staff and ex-players pay tribute to the late Gianluca Vialli before their game against Crystal Palace

The sight of Mykhailo Mudryk - whose transfer was announced during the first half - in the executive boxes fired up the fans even further and contributed to a fast start from the hosts.

But it was Palace who had the first chances of note, with Kepa blocking Tyrick Mitchell’s close-range effort after flapping at a cross, before the Chelsea goalkeeper tipped over Michael Olise’s venomous strike from the edge of the area.

Chelsea then created chances for Havertz and Lewis Hall, but the German headed over while the young left wing-back scuffed his chance of a first senior goal wide.

Jeffrey Schlupp and Hakim Ziyech also saw shots well saved as the first half ended with a bang, but the second period was a far grittier affair. 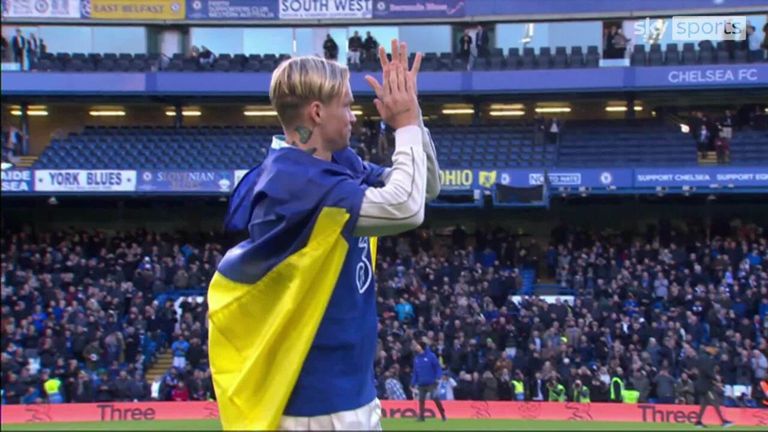 Havertz headed in a much-needed goal - just his second for Chelsea in 10 games - before the game descended into a series of yellow cards and clashes between opposition players.

Former Palace loanee Conor Gallagher attracted the ire of the visiting fans for what they saw as several acts of simulation, with a number of his ex-team-mates taking issue with his antics.

Amid the breaks in play, Palace struggled to create the chance they needed to rescue a point, with Kepa’s lunging save to deny Cheick Doucoure from range snuffing out their lingering hopes.

Potter: Fans got us over the line

Potter praised the impact of Chelsea's supporters on his side's performance after the game, while also admitting to feeling relief after claiming an all-too-infrequent victory.

"It was an emotional day obviously because of the tributes to Gianluca that I thought were very fitting for a man of his quality," said Potter.

"I thought the crowd were great today in terms of supporting the team. They recognised the moment we’re in and recognised the young players on the pitch - they stuck with the guys and got us over the line."

The head coach added: "I’d be lying if I said I wasn’t relieved because it’s nice to get a win.

"You have to deal with bad times and the tough situations, accept the criticism that comes your way and take your responsibilities. That’s what we’ve tried to do.

"The players have suffered, of course - it’s not nice - but that’s why it’s important for them to enjoy the win today. It gives us a little bit of a shot in the arm for the weekend."

Patrick Vieira fumed both during and after the game at the officiating, while also revealing his frustrations with his misfiring forwards after a third goalless display in five games.

"There was a lot of frustration from my side because I think we get too many decisions against us," said the Palace boss, who was booked towards full-time.

"What is important is to understand we don’t want any kind of favour. We just want to be treated like everybody else. The frustration grows from game to game. This is something I can’t accept."

Palace ended the game with an expected goals total of just 0.58 but Vieira believes his side created enough opportunities to have taken something back to south London.

"The way to look at it is the chances we created," he said. "Again, we created enough chances to score goals, so the problem is not about doing the most difficult thing, which is to create those chances. It’s about scoring and we should score more goals - this is a fact.

"We have quality players who can do that. At the moment, it’s true that we lost a little bit of our confidence and we don’t take our chances. We have to keep working."

Given his current situation, Potter would no doubt have taken any kind of victory when Chelsea’s meeting with Palace got under way. As it turned out, the beleaguered head coach got the three points he would have been desperately searching for thanks to Havertz’s timely header, but the fact that Kepa was Chelsea’s outstanding player showed how uncomfortable an afternoon it was for the hosts.

A win is a win, Potter may argue - and it was needed in order to remain 10 points behind fourth-placed Manchester United and keep up his side’s slim hopes of qualifying for the Champions League.

But the pressure on the former Brighton boss will only be lifted for a short period of time if Chelsea do not back up this result. The Blues’ next outing is a trip to Anfield to take on a struggling Liverpool side with whom they are level on points, before a rematch against Fulham on February 3 - live on Sky Sports - after their neighbours beat them on Thursday.

If Potter can come out of those two matches with positive results, he will perhaps believe he has turned the corner in one of the most challenging periods of his career.

But lose at Anfield and fail to beat Fulham for the second time in a number of weeks? The embattled Chelsea boss will be back to square one.

The consensus seems to be that Vieira has helped to progress Palace since replacing Roy Hodgson as manager in the summer of 2021, with the former Arsenal captain introducing a more attractive style of football that saw the Eagles reach 50 Premier League goals for the first time in three seasons in his debut campaign.

Vieira kept Palace well away from relegation worries last season, but while they are seven points above the drop zone this term, the south Londoners’ recent form may have supporters looking nervously over their shoulders.

Palace’s results have been concerning since the World Cup, with just one win in five matches, while they drew a blank in front of goal in three of those contests, meaning last season now looks a distant memory.

Only four sides have scored fewer Premier League goals than Palace this season and Vieira bemoaned the lack of confidence that is hampering his forwards following the defeat at Chelsea.

The manager left Jean-Philippe Mateta and Odsonne Edouard on the bench at Stamford Bridge and it would not be a surprise if he looked to boost his attacking options in this month’s window.

Vieira is frustrated, with his booking during the match and post-game complaints about wanting to be treated equally by officials making that clear. Perhaps a proven goalscorer would help to turn around his side’s form - and may also turn around the manager’s mood.

Chelsea's next game is a crucial Premier League clash at Liverpool on Saturday - kick-off 12.30pm.

Crystal Palace's next outing is a Premier League fixture at home to Manchester United on Wednesday, live on Sky Sports - kick-off 8pm.

Patrick Vieira's side then return to Selhurst Park for the visit of Newcastle on Saturday, live on Sky Sports - kick-off 5.30pm.