Free match highlights and report as first-half goals from Ilkay Gundogan, Phil Foden and Kevin De Bruyne give City statement win; City up to fifth, four points off Liverpool with game in hand; Chelsea eighth, seven off the lead, after one win in six Premier League games 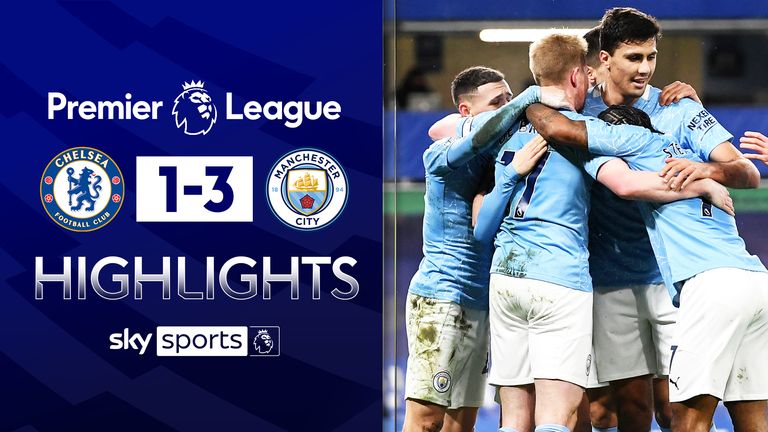 Manchester City dazzled with a first-half flurry to beat Chelsea 3-1 at Stamford Bridge, leaving Frank Lampard's side with just one win in six Premier League games.

It was the "best City have played all season" said Gary Neville on commentary as they move up to fifth, four points off leaders Liverpool with a game in hand, while Chelsea are down in eighth, seven off the lead having played a game more.

After a sluggish start, Ilkay Gundogan continued his goalscoring run with a brilliant turn and finish from 18 yards (18), before Phil Foden's deft finish at the near post from Kevin De Bruyne's centre moments later (21).

Playing without a recognised striker, City made Chelsea look like they were playing without defenders as De Bruyne turned scorer (34). Chelsea committed numbers forward, and the Belgian finished off on the rebound after Raheem Sterling had hit the post having found himself through on goal from the halfway line.

Chelsea sub Callum Hudson-Odoi (90+2) finished at the far post for a consolation, but the damage had been done, leaving Lampard with a points-per-game ratio in the Premier League of 1.67, lower than any Chelsea manager in the Roman Abramovich era.

Man of the match: Ilkay Gundogan

How City blew away Chelsea with early show

City's game against Everton had been called off due to Covid-19 cases at the club, but Pep Guardiola's side looked in good health with an outstanding first-half display.

Starting with De Bruyne as the furthest man forward, City barely saw Chelsea's half in the opening 15 minutes as the hosts looked to press high and stun their opponents early on. But it was City who blitzed with goals just two minutes and 37 seconds apart from each other.

In fact, De Bruyne should have had them ahead moments before their opener, slipping wide from Joao Cancelo's through ball when one-on-one with Edouard Mendy after Chelsea's defence had parted too easily.

City have required goals from different sources in the absence of Sergio Aguero this season, and it was Gundogan again who contributed with a turn and finish from just inside the box from Foden's square touch, beating Mendy low down to his left despite getting a touch. It was man-of-the-match Gundogan's third goal in four games having scored three in his previous 38 before that.

City smelled blood and were soon feasting on Chelsea; after working their way up the pitch well, De Bruyne's deft low pass through the legs of Cesar Azpilicueta found Foden peeling off the defence at the near post, and he stroked past Mendy at his near post from six yards.

They were helped to their third by some woeful Chelsea defending, with Sterling clean through on goal before he'd even reached the halfway line after N'Golo Kante's scuffed kick as Chelsea piled the box.

Sterling travelled to the box, turned back as Mendy rushed out, then hit the post with his effort from an angle to the left of the box, only for De Bruyne to clean up the rebound with a touch and finish into the bottom corner, his first non-penalty goal this season.

It was "football at its best" said Graeme Souness at half-time as City flexed their muscles, but Chelsea's defending was, according to Roy Keane, "shocking, with no aggression", with Thiago Silva and Kurt Zouma failing to make a single tackle in 90 minutes.

City nearly scored a fourth early in the second half as Mendy tipped over Rodri's header at point-blank range, and though Chelsea shut up shop, it was one of very few positives they could take from a concerning day at Stamford Bridge.

There were only half chances for either side as City took their foot off the gas - Mateo Kovacic struck wide, as did De Bruyne - while Timo Werner registered just one shot as his wait for a goal approaches 800 minutes.

Lampard recalled Silva and Zouma to his defence after the pair sat out the 1-1 draw with Aston Villa. Christensen and Rudiger both dropped out while Kovacic was preferred to Jorginho in midfield.

There were alterations further afield too as Giroud and Hudson-Odoi dropped to the bench as Werner started up front along with the fit-again Ziyech.

The big news for the visitors was that Zack Steffen started his first Premier League game in place of the absent Ederson, who is reportedly self-isolating.

Torres was also absent as Foden started in his place while Zinchenko was selected at left back in place of Ake.

Chelsea did get a consolation through Hudson-Odoi in stoppage time, turning home at the far post from Mason Mount's delivery across the face of goal.

The result means Chelsea have taken just three points from a possible 18 against teams in the top seven this season as questions begin to be asked of Lampard's side having looked so watertight approaching December. 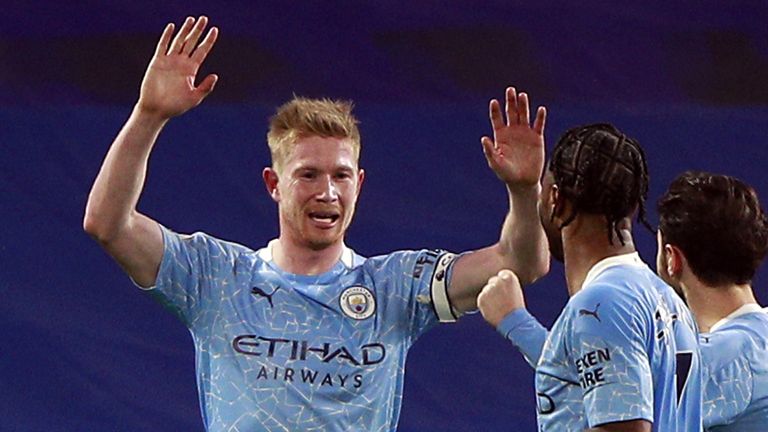 Roy Keane and Micah Richards described Kevin De Bruyne as 'world class' and one of the best the Premier League has seen after a superb performance in Man City's win over Chelsea.

For City though, this was a statement as several sides jostle to be Liverpool's closest challengers, as Guardiola's side made it 11 unbeaten in all competitions.

Keane: Chelsea no stronger after spending

"Frank said they started the game well, the first 10 minutes. The game is 90 minutes long. I think what will frustrate him most looking back at the game and the run they've been on, for the money they've spent they don't look any stronger than last season.

"It's a new league, new language, even with Covid and no supporters, it's a big ask. But players not sprinting back, I really don't get that. That should be in your instinct as a human being and football.

"Frank will be concerned for what he saw today. Today you're thinking with the attacking players, I thought they'd put up a performance, but there was a lack of energy.

"When you're losing a game 3-0 and not putting a tackle in, it's a huge concern. He's got senior players out here, players who have won the World Cup, how they didn't sort it out, making tackles, pulling people in, sitting in. That would be the big concern for me.

"Chelsea don't give managers time. It's in their DNA and history not to give them time." 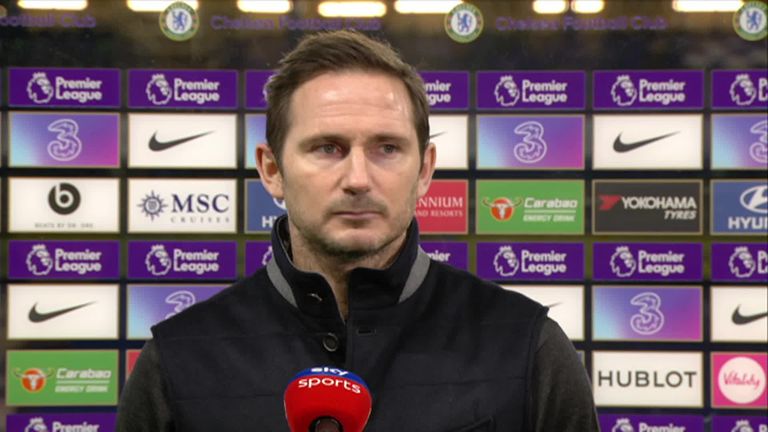 Frank Lampard felt his Chelsea players were being taught a lesson in the first half of their 3-1 defeat to Manchester City which Lampard labelled as painful.

Chelsea boss Frank Lampard: "For 10 minutes, we were good. I'm not claiming that but it's just the reality of the game. We conceded two really poor goals and I felt it knocked us. I felt we didn't react as well as I wanted. There were serious lessons in the first half but we showed good character in the second but the game was done.

"I know De Bruyne was here as a kid and couldn't get in. Credit to him, he went away and came back and is now a prime Kevin De Bruyne. You can go through their team and talk about that.

"The reality is that one month ago and at the beginning of the season there was talk over whether we could win the league, but I was pretty sure of the fact of where we were at in terms of the ban and the rebuild and the youth. I knew there would be periods of pain we would go through as a club."

Man City boss Pep Guardiola: "The result is incredible for us but I'm delighted with the way my team played.

"To win here in Stamford Bridge...you cannot win titles playing the way we were, day by day not getting better. In this competition, you have to play. First is the game, and after the results come. 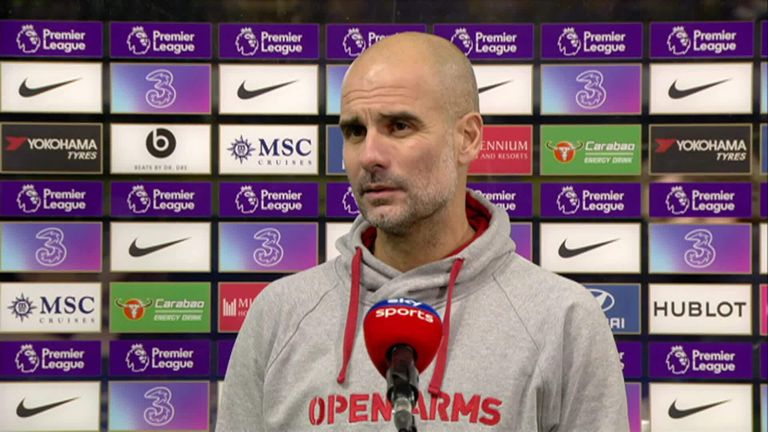 Pep Guardiola praised the performance of his players as Manchester City beat Chelsea 3-1 at Stamford Bridge and he described the win as an incredible result.

"Chelsea is one of the strongest teams. You cannot deny they have been suffering the last couple of games but they are a strong team when you look at their bench. The players were fantastic in all departments.

"We're a team who have to play in one certain rhythm. We have to play 1,000 passes and in the right moment attack. This is how we won our titles previously. We've missed this a little bit this tempo and today we got it."

Chelsea now host Morecambe in the FA Cup third round on Sunday at 1.30pm, before going to Fulham on January 15 in the Premier League on Friday Night Football, live on Sky Sports Premier League at 8pm.

Manchester City now go to Manchester United in the Carabao Cup semi-final on Wednesday, live on Sky Sports Football at 7.45pm, before hosting Birmingham City in the FA Cup third round on Sunday at 1.30pm.