Match report Fran Kirby and a Maren Mjelde penalty give Chelsea their first WSL victory of the season despite an impressive first-half performance from Manchester City. 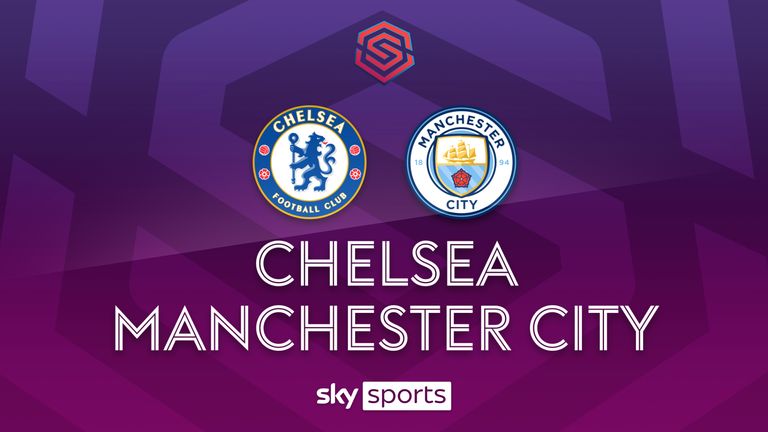 Highlights from the WSL match between Chelsea and Manchester City.

Chelsea bounced back from their opening day defeat with a much-needed 2-0 victory over Manchester City with goals in each half from Fran Kirby and a Maren Mjelde penalty.

Emma Hayes admitted her side "couldn't hit a barn door" in their shock 2-1 defeat at Liverpool last weekend but they rediscovered their finishing touch at a sold-out Kingsmeadow as City squandered several good chances.

Kirby netted against the run of play after the visitors had chalked up 10 attempts during a highly entertaining opening period which also saw Chelsea keeper Ann-Katrin Berger push Laura Coombs' effort onto a post.

Berger made a string of fine saves on her return to action after announcing last month she was being treated for the recurrence of thyroid cancer. The Blues capitalised on her performance with a better second half display, capped when Mjelde emphatically found the top corner from the spot after Leila Ouahabi was penalised for handball.

Man of the match: Fran Kirby

How Chelsea earned their first victory

An end-to-end first-half almost began with a goal inside the first 10 seconds when Sam Kerr shot wide from inside the box following a long ball forward. Then it was City's turn to go close in the opening minutes as Chloe Kelly had a clear sight of goal but couldn't get the power or direction on her effort to trouble Berger. 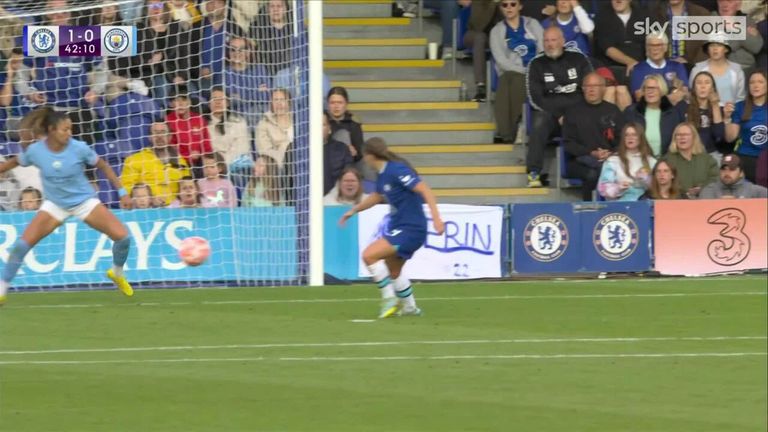 Fran Kirby opens the scoring for Chelsea against the run of play against Manchester City in the WSL.

Chelsea should have had an opener when Steph Houghton's back pass was short and Kerr nipped in on goal. The striker turned down the opportunity to shoot, instead squaring to Kirby, who looked as though she wasn't expecting the pass, and eventually her effort was crucially blocked by Laia Aleixandri Lopez.

City soon thought they should have had a penalty when the dangerous Khadija Shaw was clearly brought down by Kadeisha Buchanan, but nothing was awarded and the contact was outside of the box in any case.

Berger saved at her near post from Lauren Hemp with Chelsea still yet to have a shot on target until Guro Reiten squared for Kirby to tap into an empty net following good work by Jessie Fleming. City nearly responded immediately as Berger pushed Coombs' effort onto a post. 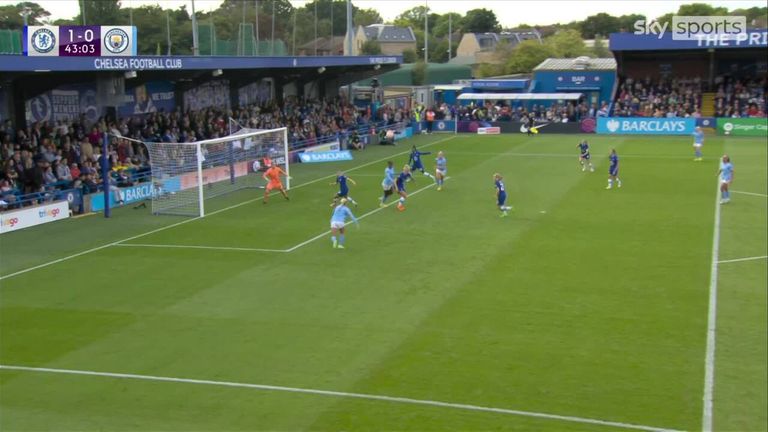 Ann-Katrin Berger produced a brilliant save to deny Manchester City's Laura Combes a chance to equalise shortly after going 1-0 down against Chelsea.

Chelsea needed to improve in the second half and they did as City ran out of steam. They wrapped up the points when Sophie Ingle's volley from the edge of the area hit the outstretched arms of Ouahabi before Mjelde expertly dispatched the spot kick. 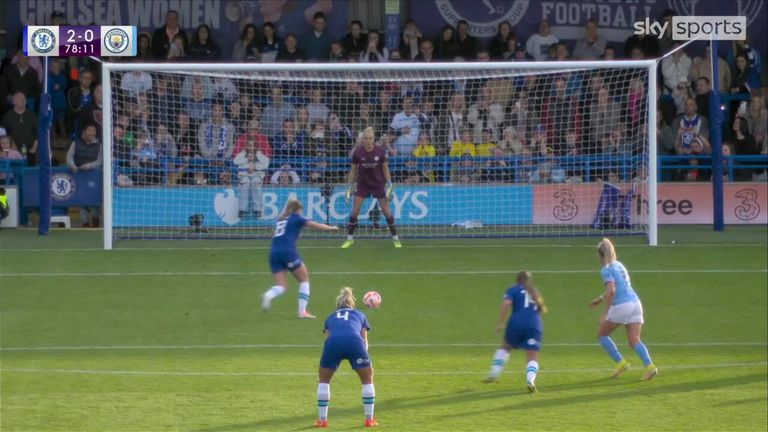 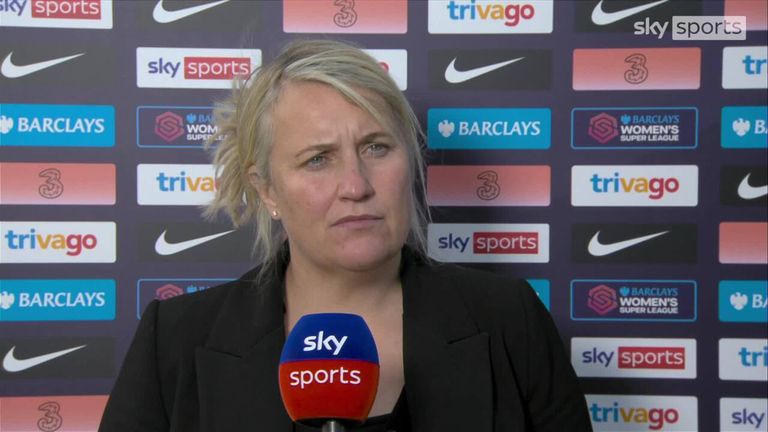 Emma Hayes felt Chelsea’s first half performance was well below the standard they should be setting but it improved in the second period as they beat Man City 2-0. Hayes still expects Chelsea to improve as the season progresses.

"I felt we were lucky to go in 1-0 up, but sometimes you've got to do that and I thought our performance second half was what I was expecting from us, it was much more controlled, we dominated all areas.

"But first half, I thought were overplayed, we overdid it and went from underplaying a week ago to overplaying this week. We've got to find the balance, but it is the second game, I thought it looked like a second game of the season.

"If you are going to give it against Millie Bright last week, then you are going to have to do it this week. The officials kept on saying to me that certain changes that have happened this year in terms of letting certain things go, but not the penalties, then it is a penalty.

"We just need to find a rhythm, we've had a cancelled game, lost last week, I thought it was resilient from the team, I still think we can create a little more for the quality that we have. But it was a good day for the team in general." 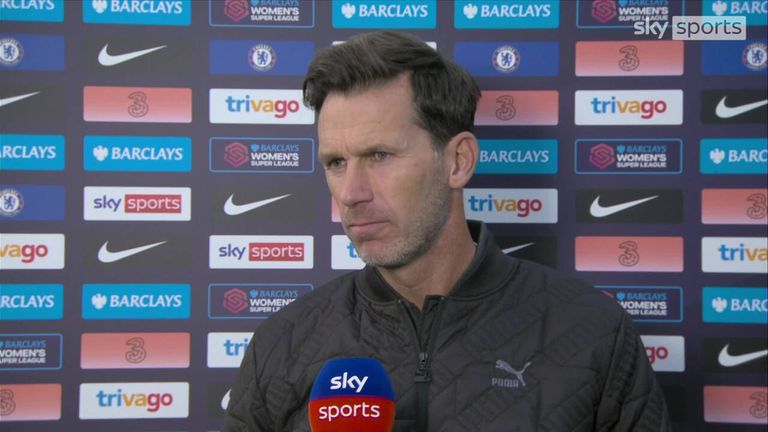 Manchester City women’s manager Gareth Taylor was pleased with his players’ performance despite losing 2-0 to Chelsea at Kingsmeadow in the WSL.

"I thought we were great first half, dominated most of the game, had some good moments, and could have capitalised on a couple of those chances, some good saves obviously from Berger and she's not bad when you are taking shots from 20-25 yards.

"Disappointed to give the goal away, but it was full of positivity at half-time, we really got up to the ball, really engaged, and that probably took a little bit out of us for the second half. When you put a lot of energy into a game like that, naturally you are going to have a consequence of that.

"It is handball, but the ball is going over the bar. I don't know what the rule is whether regardless of where it is going, but that is not a shot on target, so you can make of that what you want.

"They are a good team, they are good on this patch, we knew it would not be easy coming here today, but we did not make it easy for them."

Manchester City next play on October 16 when they face Leicester after the international break.