Chievo vs Juventus. Italian Serie A.

Chievo 2-3 Juventus: Cristiano Ronaldo without a goal as Serie A champions win

Ronaldo missed a host of chances on his Serie A debut 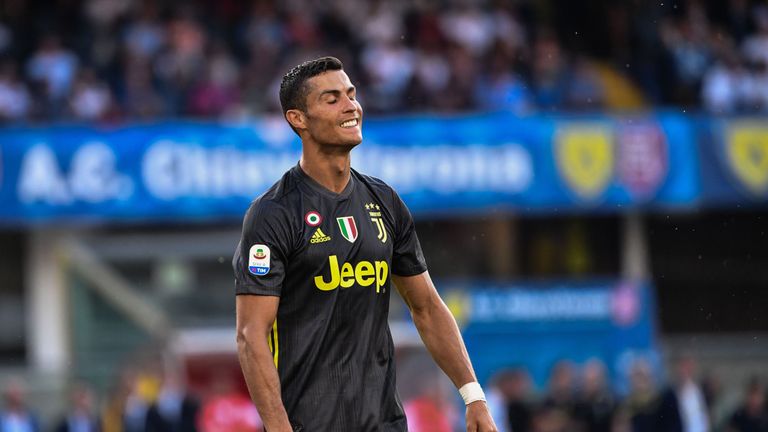 Highlights: Ronaldo did not score on his Serie A debut

Cristiano Ronaldo was unable to find the net as the Serie A champions fought back to win 3-2 against Chievo in Verona.

Sami Khedira, Ronaldo's former team-mate at Real Madrid, got the visitors off to the perfect start (3) before Mariusz Stepinski nodded in an equaliser on the half-hour mark.

Emanuele Giaccherini gave Chievo the lead from the penalty spot in the 56th minute, but an own goal from Mattia Bani (75) left the tie finely poised heading into the final quarter of the game.

Juventus thought they got the winner in the 86th minute, but Mario Mandzukic's header was ruled out by VAR as Ronaldo's handball beforehand saw the goal chalked off. Moments later and Juventus did get their third through substitute Federico Bernardeschi who slotted in from close range (90+3).

Massimiliano Allegri's men took an early lead as Khedira latched onto Giorgio Chiellini's flicked-on header from a corner and fired in at the near post.

Joao Cancelo missed a glorious chance on his league debut in the ninth minute. The 24-year-old right-back scuffed his shot from only three yards out wide while getting outmuscled. And it wasn't until the half-hour mark when Ronaldo had his first real sight on goal. The five-time Ballon d'Or winner met a long ball over the top before he lashed his volley over.

Against the run of play, Chievo found their equaliser eight minutes from half-time. Stepinski took advantage of some sloppy marking to reach Giaccherini's cross and neatly steered his header into the top corner.

Two minutes into the second half and Ronaldo sent a fierce drive towards goal, forcing Stefano Sorrentino to parry his powerful effort away, but it didn't take long before Chievo took the lead from the spot. Cancelo tripped up Giaccherini in the box before the former Sunderland winger slotted his penalty into the bottom left corner.

The introduction of Mario Mandzukic in the 64th minute saw Ronaldo move to the left flank and he came agonisingly close to scoring as his dipping strike forced Sorrentino to get a strong hand to it. The 33-year-old came even nearer to his debut goal moments later. Paulo Dybala sent him through but his poked effort was deflected onto the roof of the net.

Juventus got their equaliser in the 75th minute with Bani heading into his own net before a period of controversy. Juventus thought they'd regained the lead through Mandzukic in the 86th minute but the referee, after consulting VAR, ruled it out for a Ronaldo handball in the build-up.

In the 89th minute, Juventus got their winner as Alex Sandro's drilled cross was slotted in by Bernardeschi to mark a chaotic end to Ronaldo's league debut.

69 - Finds himself in space in the box, but a poor first touch results in a deflected finish over the bar

86- Fouls Sorrentino and is caught out for handball, resulting in Mandzukic's goal to be ruled out by VAR