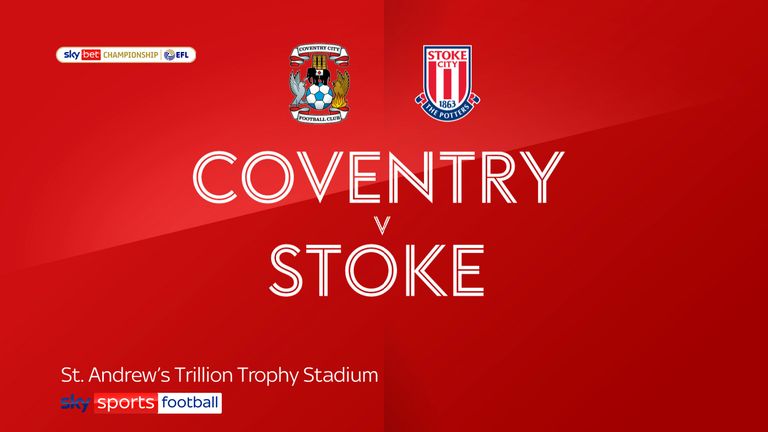 Highlights of the Sky Bet Championship match between Coventry City and Stoke City.

Stoke recorded a fourth successive Championship clean sheet but were held to a third straight stalemate on the road as they wasted a string of chances in a 0-0 draw at Coventry.

It was also a third consecutive goalless game for the Sky Blues at their temporary St Andrew's home as the visiting Potters spurned half a dozen golden opportunities to claim the points.

Jordan Thompson missed Stoke's clearest openings, firing one wide and another onto the bar, while Steven Fletcher wasted two big headed chances as Stoke missed out on climbing into the top six.

Stoke had scored just four goals in their previous seven games, three fewer than Coventry in that timeframe, but for two sides struggling in front of goal they served up a glut of first-half chances.

The Potters spurned a chance to go ahead three minutes in as Fletcher chested down Nick Powell's diagonal ball in the box but fired his half-volley over under pressure from two defenders.

Powell was involved again on the quarter-hour as nervy Coventry keeper Ben Wilson miscontrolled a Dom Hyam backpass and saw his clearance charged down by the Stoke midfielder but it rolled wide.

It was Stoke's turn to look nervous defensively on 24 minutes, Tommy Smith's backpass selling Bursik short, but the keeper just managed to block Callum O'Hare's attempt to poke beyond him.

But, arguably the best opportunity of the first half fell to Thompson three minutes before the break, arriving late in the box to flash Brown's low cross inches wide first time from around 15 yards.

Thompson missed an even better chance six minutes into the second half, scuffing into the ground and onto the bar from 12 yards after Brown's pull-back drew keeper Wilson out of position.

O'Hare and Allen saw efforts deflected wide as Coventry responded but Stoke - for whom Joe Allen came off the bench after nine months out with an Achilles injury - continued to create more.

Fletcher really should have earned them all three points but sent two good headed chances wide, first when Nathan Collins headed a deep free-kick across goal and the second from a Smith cross.

Coventry's Mark Robins: "It's a good point against really strong opposition - you look at their bench and it's frightening. For the first hour, we probably had the better opportunities of the two teams. I thought we moved the ball really well but we sometimes had one pass too many where we could have taken a shot.

"If we had taken those opportunities to shoot a bit earlier, we may have had a bit more joy. You could probably write the script before the game because they are probably the best-drilled defensive team in the division. It was really tight, nip and tuck all afternoon and probably a fair result at the end of it. A clean sheet and another point, it's a really good point."

Stoke's Michael O'Neill: "We haven't been able to rotate the team as much as we would like because of the players that have been out, and we probably have the opportunity now which will keep us a little bit fresher.

"It was great to see Joe [Allen] back. We've had to hold him back a bit but it's a real positive for the group. We are getting players back now - John Obi Mikel and Sam Clucas, for example, are coming back into contention and I believe we will be stronger in the second half of the season."