Report and free match highlights as Patrick Vieira draws his first home game as Crystal Palace manager; Conor Gallagher impressed on his debut, hitting the post early on; Bryan Mbeumo also hits the woodwork for Brentford; Crystal Palace have their first point of the season FREE TO WATCH: Highlights from the goalless draw between Crystal Palace and Brentford in the Premier League.

Patrick Vieira has his first points on the board as Crystal Palace manager after his side played out a 0-0 stalemate against Brentford at Selhurst Park.

There was a raucous reception for the new manager ahead of the game, and the Palace players responded brightly to the welcome as the impressive Conor Gallagher hit the woodwork inside seven minutes.

But as they showed against Arsenal in the opening game of the Premier League season, little will intimidate Brentford this season and they soon pushed Palace deep into their own half. Bryan Mbeumo also hit the post with a well-taken free kick in the first half.

Brentford dictated the play for much of the second half too, but there were openings at both ends. Christian Benteke and Ivan Toney both nodded over, but neither side were able to find the breakthrough in a rather feisty affair.

It was a much-improved performance from Vieira's Palace as the manager drew his first game in front of the home fans - although he awaits the first goal of his tenure - while Brentford continue their unbeaten start to life in the Premier League.

How the points were shared at Selhurst

There was festival atmosphere at Selhurst Park ahead of kick-off, with the Holmesdale End unfurling a banner that read 'the soul of Palace returns, the terraces come alive'.

Palace could have scored inside seven minutes too. Gallagher had a lively debut and linked up well with Wilfried Zaha down the right. It was the pair that combined for a great chance, as Zaha placed a lovely pass into the middle for his new team-mate, but Gallagher's effort hit the post before smacking the top corner of the crossbar and going wide.

Man of the match: Conor Gallagher.

Soon after, at the other end, Brentford had their opening shot of the game. Despite being surrounded by defenders, Toney did well to find himself an inch of space and struck on the volley, but it just flashed wide.

Gallagher continued to be Palace's best attacking threat, and after leaving Frank Onyeka in a heap outside the area, broke down the other end and forced a stretched save from David Raya. Then, Vitaly Janelt and Mbeumo had their sights of goal, but were unable to find a way through.

Brentford soon managed to pin Crystal Palace into their own half, and had a few efforts to take the lead. Mbeumo took a superb free-kick from the right, but he could not quite dip it in time as it pinged off the far corner of the goal.

Toney struck again just before the break, but after some good defending from Tyrick Mitchell, landed straight in Vincente Guaita's hands. Onyeka had been in the wars in the first half, but almost capped it with a fine strike. However, the fierce drive was held by Guaita.

Palace could again have taken an early second-half lead. Joel Ward did well down the right flank, managing to send in a cross, but Benteke nodded his effort over the crossbar. It was the same story at the other end soon after as Mbeumo delivered another superb corner, but Toney could not find any direction on his header as it whistled over the crossbar.

The two Brentford forwards combined again as the half ticked by. Toney was slotted through inside the area, but his flashed effort through the six-yard box just evaded the run of Mbeumo. Palace substitute Jordan Ayew almost fired the hosts ahead late on, but skied an effort deep into the stands.

Man of the match - Conor Gallagher

Gallagher's influence was evident from the first minute. He was unable to play against Chelsea last weekend, but he bought a passion to the Palace midfield that is exactly what the fans want.

Not only was he there with silky passes for Zaha down the right, he made his fair share of tackles too. Gallagher was also Palace's biggest goal threat, having hit the woodwork early on.

He had the most shots (2), crosses (3) and joint-most tackles (3) of the Crystal Palace squad. The signs are good for a successful loan for the midfielder.

After the game, Vieira said: "This is why we fought really hard to have him at our club. His energy, the way he works on the field and he's a really good football player and I'm happy we could bring him here."

Analysis: Tough run ahead for Palace

"So Patrick Vieira gets his first point on the board as Palace boss - but he'll know he has work to do to get this side firing, after they managed just two shots on target against newly-promoted Brentford.

"It could have been different if Gallagher's shot against the woodwork had gone in during the first half but Palace looked to be missing a spark up top. They'll have to be sharper in the tough run of games they have coming up.

"Next in the Premier League they have West Ham (away), Tottenham (home), Liverpool (away), rivals Brighton (home), Leicester (home), Arsenal (away)." 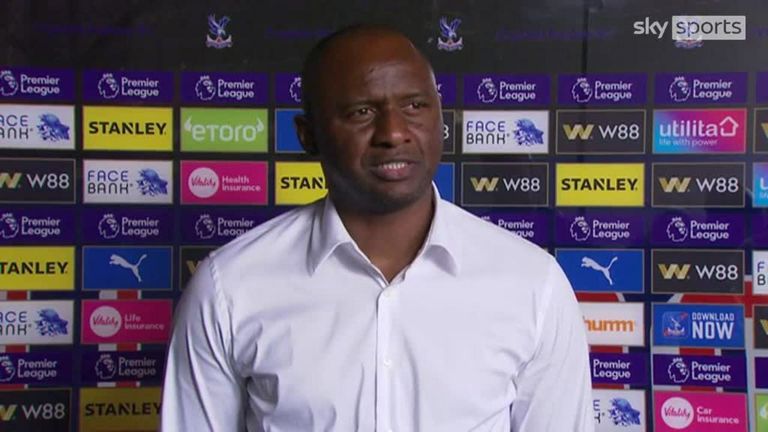 Crystal Palace boss Patrick Vieira felt his side were unfortunate not to come away with all three points, following the goalless draw with Brentford

Crystal Palace manager Patrick Vieira: "I think they were really good today. We played the ball forward, we tried to create chances, to score goals.

"You have to give credit to Brentford, they defended really well and at times, they put us under a lot of pressure, but there is a lot to build on the performance today.

"But we are frustrated. Yes, the performance is good, but we wanted to win. When you look at the support that we had today, we wanted to win the game for the fans and take those three points.

"The attitude was really positive. At times, we didn't make the best decisions when we were at the Brentford box, we didn't have enough bodies inside the box, but this is something we have to work on to have more chances of scoring goals.

"The fans can be really proud of the performance today. They worked really hard, they showed the desire, the competitiveness on the field. Now what we need is to improve our football that will allow us to win football matches." 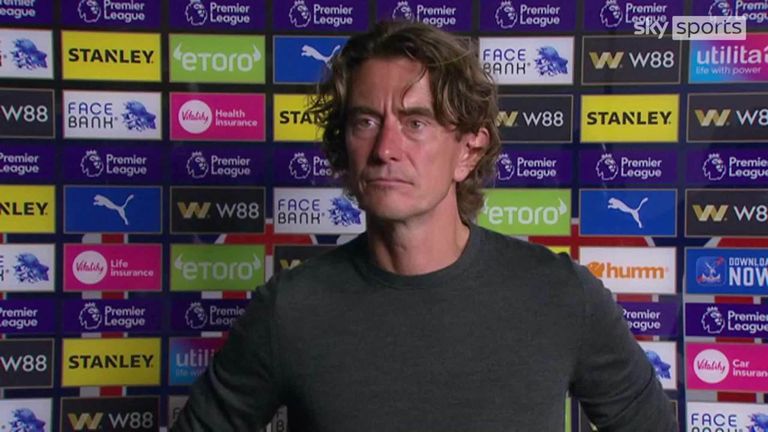 Brentford manager Thomas Frank: "I think we did well. Standing here, I'm slightly disappointed that we didn't get more out of the game. I thought that we slightly edged it.

"I think it shows there is a belief in the group that can go to a very difficult away ground against a very experienced Premier League side and we needed to defend in spells, but the way we ended in the first half shows everything about this group.

"It's good [four points and two clean sheets], and of course it's easier after the two games, but I don't think like that. I think one game at a time and when I see how we performed, I want a bit more.

"But it is good that we've come up to the Premier League and have four points and two clean sheets. But we have more to give."