Match report and free highlights as Wilfried Zaha scores inside three minutes to see Crystal Palace ahead; James Ward-Prowse and Armando Broja score in quick succession to put Southampton in front at the break; Jordan Ayew's drought-breaking goal rescues a point for the hosts 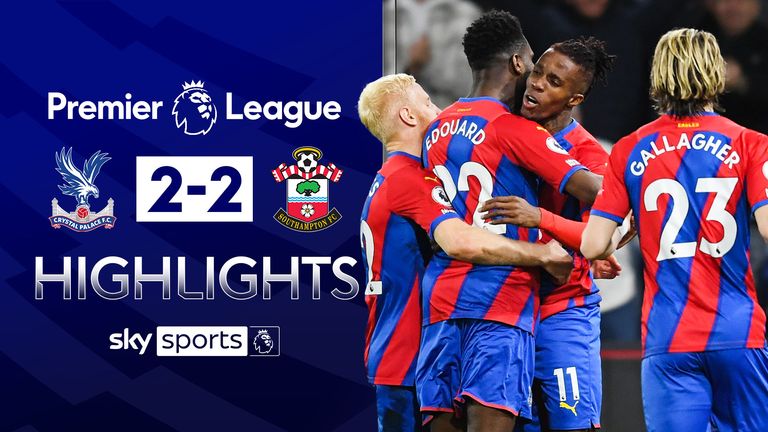 FREE TO WATCH: Highlights from Crystal Palace's draw with Southampton in the Premier League

Jordan Ayew scored his first Premier League goal in 43 games as he rescued a 2-2 draw for Crystal Palace against Southampton.

The forward's last goal for club or country came in a 4-1 win against Leeds in November 2020, and it would have been a sweet feeling as he slotted home from a tight angle in the 65th minute.

"I think it is massively important [for Ayew's confidence] because with forwards, the more goals you score, the more confident you are about yourself," Crystal Palace manager Patrick Vieira said after the game.

"But the message has always been clear with Jordan - what we want from him is to keep playing the way he's been playing lately because his work ethic for the team is what we need and what we want. I'm really happy he scored that goal… Hopefully there is more to come from him."

Crystal Palace had let a 1-0 lead slip after Wilfried Zaha fired them ahead inside three minutes, picking up immediately where they left off in their convincing 3-1 victory against Everton on Sunday.

But two quickfire goals from Southampton saw them ahead at half-time. James Ward-Prowse curled home a trademark free-kick (33) before Armando Broja (36) scored his fourth Premier League goal of the season.

The sharing of the spoils was a fair reflection overall, with Crystal Palace jumping above Brighton and Brentford into 11th place with 20 points. Southampton remain in 15th place, but are now six points clear of the drop zone despite having not won in their last six games, drawing three.

How Ayew broke his scoring drought

Crystal Palace were ahead inside three minutes. It was some superb play from Will Hughes - making his second successive start - to dispossess Oriol Romeu in midfield. He then played in Odsonne Edouard, who picked out the run of Zaha into the box. He easily checked past Lyanco before firing home on the angle.

The hosts continued to dominate, with Jack Butland first tested in the 18th minute. Broja nodded a free-kick goalwards, but it went straight at the goalkeeper. Will Smallbone and Romeu had efforts from range, but they flew well wide.

Palace should have made it two soon after. Zaha burst down the left wing, sending a low cross through for Edouard. He was ahead of his defender and turned his foot onto it, but made a poor connection as he poked the ball wide of the back post.

The hosts were punished for the miss as Southampton took a quickfire lead. Hughes gave away a free-kick just outside the 'D', which Ward-Prowse eyed up. It was in his ideal range as he curled a beautiful strike through Butland's fingertips and into the top corner. 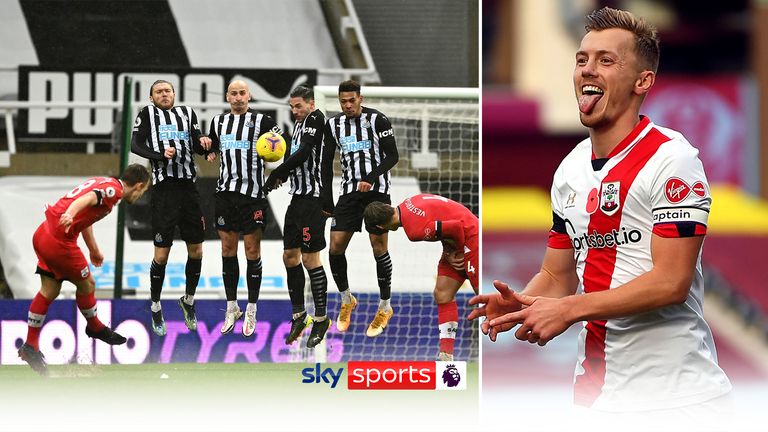 After James Ward-Prowse scored his 11th Premier League free-kick this week, we take a look back at his first 10 for Southampton between 2016 and 2021

Three minutes later and the Saints took a shock lead. It was an uncharacteristic error from Conor Gallagher in midfield as he was caught out by Kyle Walker-Peters. He then slotted Broja through and he drove to the top of the area before hitting a low, hard shot past Butland, celebrating in front of a stunned Holmesdale End.

It was a very scrappy start to the second half, but Vieira introduced Christian Benteke in the 64th minute and it paid instant dividends. He combined well with Edouard in the box, with the latter's scuffed shot seen away by Willy Caballero's foot. It landed to Ayew on the right and he rifled home on a tight angle for his first goal in 43 games.

The game continued to see the sides trade blows as it headed towards a conclusion. Saints substitute Shane Long nodded a Ward-Prowse free-kick goalwards, but it was an easy collection for Butland. As five added minutes were shown, Caballero was down low to push away Joel Ward's cross from the right.

Romeu tried to snatch a late Saints win with a curling effort from range, but it just did not quite have enough dip to find the back of the net as the points were shared at Selhurst Park.

It was impressive performance from the Chelsea loanee. His finish was superb to fire Southampton ahead, with both of his shots being on target with one goal. He also had the most Saints touches in the opposition box (4) and was joint top for dribbles in the Southampton team (3 - with Nathan Tella).

Wednesday's goal was his fourth in the Premier League this season, having now scored more league goals than Romelu Lukaku (3), Kai Havertz (2) and Timo Werner (1) this season. 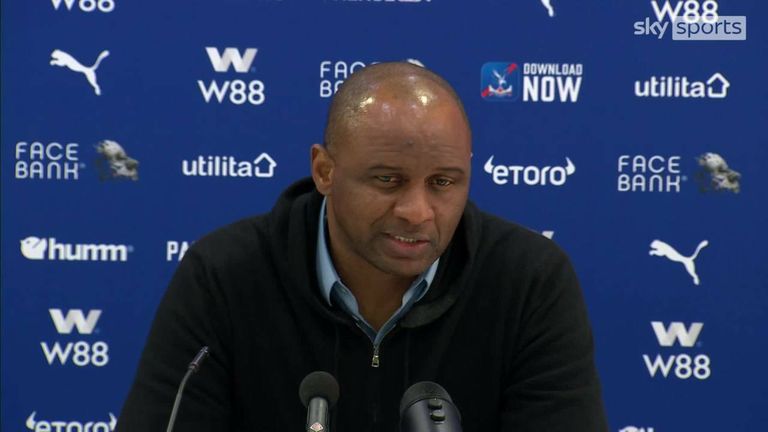 Crystal Palace manager Patrick Vieira: "At the end of the first half, we got punished by stopping playing after scoring the first goal. I think we were making too many touches, we were playing individually and not collectively and they started to build confidence.

"Then they scored those two goals and, in the first half, I think we played for 10 or 15 minutes.

"When I look at the game overall, I'm pleased to take a point because they played some really good football, they pressed us high and we didn't manage to play through that pressure.

"The point we took tonight regarding the way we played, I don't think we deserved more than that." 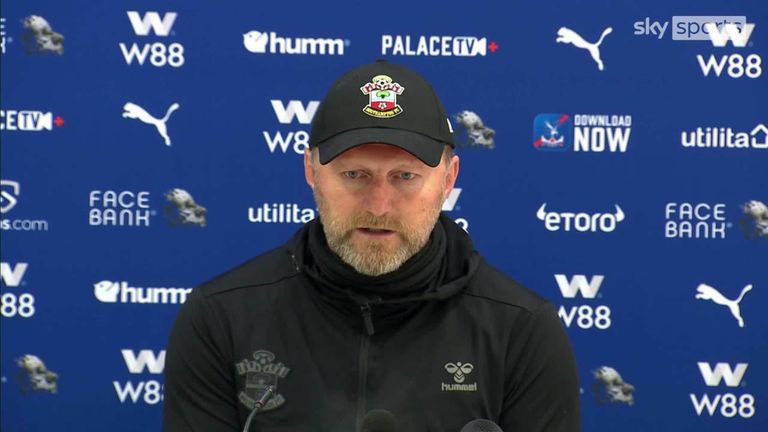 Ralph Hasenhuttl says Southampton had 'massive opportunities' to turn Wednesday's 2-2 draw at Crystal Palace into a win, and bemoaned the 'stupid' goal that cost his side the victory

Southampton manager Ralph Hasenhuttl: "After not a very good start, it made it not easy for us. We then had a little bit of luck because we could have been two down and then it's tougher to come back.

"But the reaction we showed afterwards was brilliant. Prowsey had a good moment to show his quality. Then the belief was there that we could get something here and we started playing football how we want to play.

"They had not one chance after this, the first half was only for us. We had massive opportunities for scoring more often.

"In the second half, I saw both teams fighting for everything. After 20 minutes, there was a little bit of time where we were running out of energy. Shortly before I wanted to make the first changes, we conceded a stupid goal.

"Maybe this was the most disappointing part of the game today because it was the only chance of the second half they had.

"When we made the changes, we put them back on the back foot… We had a few good moments… In the end, we'll take the point and keep on going."