Match report and highlights as Adama Traore nodded Wolves ahead in the first half; Eberechi Eze equalised for Crystal Palace early in the second before Wilfried Zaha slotted home the winner; The Eagles have come from behind to win in the last three games in which they've conceded first 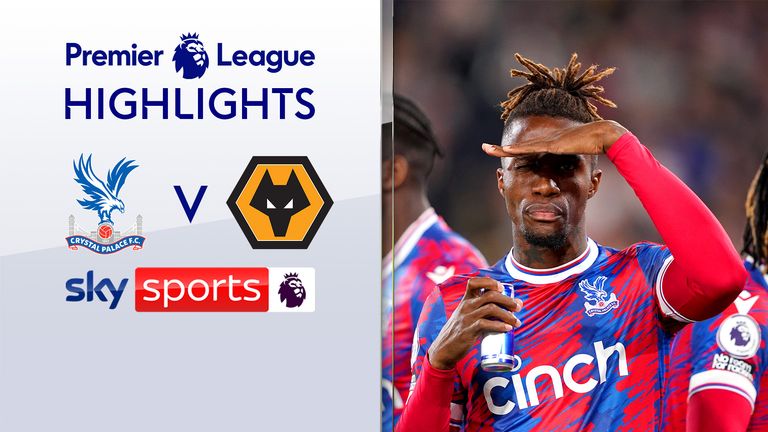 FREE TO WATCH: Highlights of Crystal Palace against Wolves in the Premier League

Wilfried Zaha inspired Crystal Palace to yet another comeback victory in the Premier League, beating Wolves 2-1 at Selhurst Park.

It was a familiar story for Patrick Vieira's men - all three of their Premier League wins this season have come when they have conceded first, also doing so against Leeds and Aston Villa.

"It's a good thing if you manage to win the game, but we make it really difficult by conceding the first goal and that's something we have to change," the Crystal Palace manager said after the game.

"It is about being more clinical, defending better as well, but today the performance was good because we showed character, quality and resilience. We are really happy with the team performance."

Both of their goals came in the second half too, having been largely below par in the first period. Wolves took advantage of this with their opener, as 20-year-old Hugo Bueno - making his first Premier League start - fizzed in a lovely cross from the right. Adama Traore (31) was left unmarked at the back post, scoring his first-ever headed goal.

Patrick Vieira made a tactical switch at half-time to shake up his side - Zaha taking a more central role just behind Odsonne Edouard, switching with Eberechi Eze - and it paid off instantly.

In a goal very similar to Wolves' opener, Michael Olise floated a cross in from the right flank with Eze (47) breezing in unmarked at the back post to nod home.

After an audacious overhead kick from Edouard went wide, Zaha (70) won the game for Crystal Palace with a cool finish. Max Kilman was unable to take the ball from his feet, sending the forward one-on-one with Jose Sa before easily finding the back of the net. It was his fifth goal of the season - more than the entire Wolves team combined.

"I took it upon myself to move from left wing and float a bit," Zaha told Amazon Prime. "It opened up room for Tyrick. It made a confusion in their defence, who to go to, and that opened them up a bit."

Despite being second-best for much of the second half, Wolves did threaten an equaliser late on but were unable to capitalise on their 1-0 win against Nottingham Forest on Saturday.

It leaves them a point above the relegation zone and still without a permanent manager. They could slip into the bottom three if results go against them in the remainder of the midweek fixtures. Crystal Palace move into the top ten ahead with 13 points.

How Crystal Palace saw off Wolves

Both sides should have found the net inside five minutes. After a fairly quiet opening, Cheick Doucoure strode forward before unleashing a shot from 25 yards, but could only find the foot of the post. At the other end, Diego Costa's toe-poke was turned by the post by Vicente Guaita.

Soon after, Crystal Palace went close again. Olise fired in a cross after his own corner was cleared back to him, but Marc Guehi glanced his header past the post. Ruben Neves also lined up a long-range shot, but fired it well wide of the target.

Crystal Palace continued to see the better of the play but were wasteful in the box, eventually bring punished by Traore's header.

It was a stop-start remainder of the first half with both Matheus Nunes and Daniel Podence needing medical attention, but Neves could have added a second for Wolves with the last kick. However, his direct free kick also hit the post, with referee David Coote ending the half to a close despite Wolves having a corner.

The second period began with a bang as Olise nodded Crystal Palace level, with the Eagles racing out of the traps after a disappointing first half. However, Wolves fired a warning shot just before the hour as Podence's fierce effort just looped onto the top of the net.

Edouard almost saw Crystal Palace ahead with a brilliant overhead kick. Some brilliant play from Zaha set him up, but the forward's acrobatic effort was skewed wide. Zaha soon made the breakthrough for the hosts with his well-taken finish past Sa.

Wolves threatened an equaliser late on and will have felt aggrieved to have not been awarded a penalty in the 83rd minute. Nelson Semedo's cross appeared to touch the arm of Marc Guehi on the way through, but VAR did not review the incident - much to the annoyance of the away bench.

Neves then saw another fierce shot parried superbly by Guaita, before Goncalo Guedes' low ball was fired wide by Nathan Collins. However, they were unable to find another as Crystal Palace secured their third Premier League victory of the season.

Man of the match - Wilfried Zaha

Another star turn from Zaha, who is arguably having one of his best ever seasons. Only Harry Kane (22), Son Heung-Min (18), Ivan Toney (16) and Erling Haaland (15) have scored more Premier League goals than Zaha (14) in 2022, with another of highlights against Wolves.

"The front players did really well in possession, but it was a team performance. From the back, with the way we want to play, it was really good today. I was really pleased with that.

"It [tactical tweaks] is all depending what we want from game to game. We have seven players in our front five who can perform at that level and we have to put this kind of competition to maximise the potential and to allow us to have performances like today.

"It was difficult for Wilfried or Michael to find space, so we allowed them to come a little bit more inside so there was a bit more rotation in the second half, a bit more mobility and that allowed us to be dangerous. 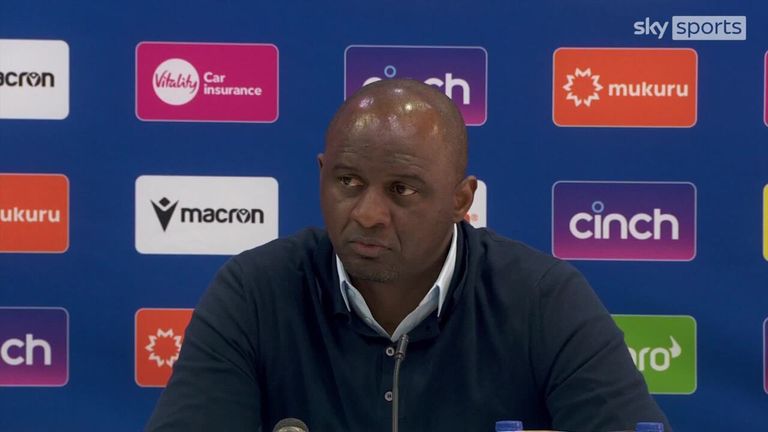 Crystal Palace manager Patrick Vieira was pleased with his side's performance as a team as they beat Wolves 2-1.

"When Wilfried is having a good day, the team will have a good day. He's an important player on and off the field, he's got the experience and today, he was really good in possession, out of possession, he worked really hard but we want him to have this kind of performance, to be consistent and allow us to follow him and every player has to play at the same level that we want them to do.

"It's not an issue at all [Zaha's contract]. Wilfried knows what the club thinks about him and we know what he thinks about the club. There will be discussions that take place, but for myself and club, it's important for him to play at this level, be consistent and to help these young player around him to grow and we will see what will happen.

"It's a good thing if you manage to win the game, but we make it really difficult by conceding the first goal and that's something we have to change. It is about being more clinical, defending better as well, but today the performance was good because we showed character and quality and resilience. We are really happy with the team performance."

Davis: VAR has given us grey areas 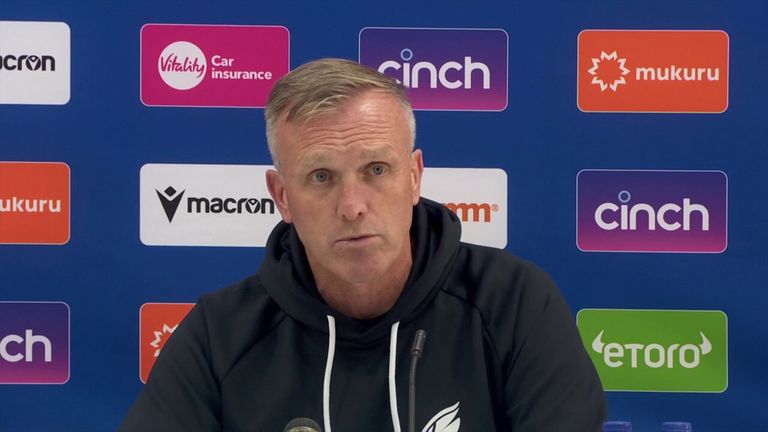 Wolves caretaker manager Steve Davis says his side could have managed the game better when they were ahead against Crystal Palace.

Wolves interim head coach Steve Davis: "We executed the game plan really well in the first half. We stifled them and played our midfield players slightly wider. We scored with probably the best move. Neves' free-kick was crucial, had that gone in for 2-0 it would have given us a cushion.

"I was disappointed with the first 15 minutes [of the second half]. That was the worst period of the game for us. We talked a lot at half-time about how we start because we knew they would probably get a few choice words from their manager. But we weren't ready for that moment."

On the Guehi handball incident: "It looks like a penalty, the guy's put his hand out and it's hit his hand. We looked at the different angles and it clearly looks like he's raised his leg and his arm is there as well, it's hit his arm. We were pushing for the equaliser and that was the key moment.

"It's frustrating because [VAR] was brought in to get those things right, give us clarity. It's not given us any clarity, it's given us grey areas.

"We need to defend those situations better. We didn't drop off quick enough for the second. We've got to do better there. I think we had the ball for the first goal and gave it away. I thought we should have got a point out of tonight."

Patrick Vieira said that Eberechi Eze has the "talent to make him dream" about going to the World Cup with England - and he delivered another performance to be on Gareth Southgate's radar.

Vieira said: "He's getting to his best, but he's starting to really understand what the game is about - how to be decisive. He's got that talent, but there are still things he can improve in the last third. But since the start of the season, he's been really important to us and playing really well."

Marc Guehi was booked and had one awkward moment late on when it looked like the ball had brushed his arm in the penalty area, but otherwise he delivered a solid display.

Tyrick Mitchell had a difficult evening at left-back after allowing Adama Traore a free header for Wolves' goal and was then targeted down his side as the visitors pushed for a late equaliser.

Gareth Southgate has until Friday October 21 to submit his provisional England squad for the World Cup in Qatar, which gets underway on November 20.

Any provisional squad will have to be whittled down to a final 26-man list, which has to be submitted to FIFA on Monday November 14.

Crystal Palace visit Everton on Saturday at Goodison Park at 3pm in the Premier League while Wolves host Leicester at Molineux on Sunday; kick-off 2pm.