Report and highlights from the Sky Bet Championship clash between Derby and Coventry at Pride Park as Gustavo Hamer strikes late on for Sky Blues to cancel out Colin Kazim-Richards' effort for Wayne Rooney's side; Rooney waiting on decision 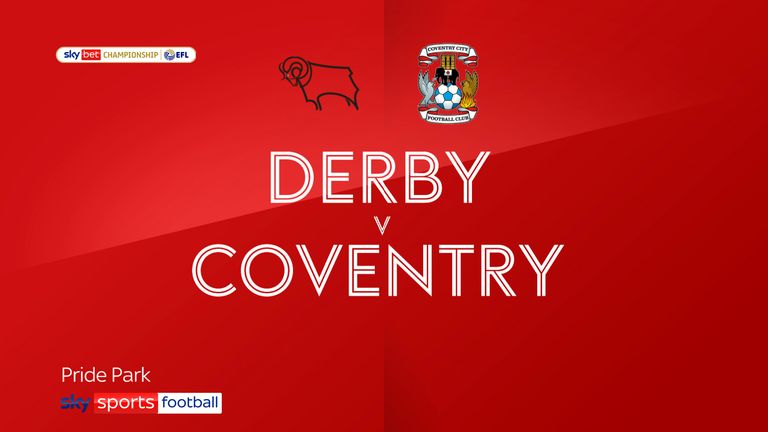 Colin Kazim-Richards' first goal for Derby looked to have given Rooney victory in his second match as interim manager but Gustavo Hamer fired home from the edge of the area to give Coventry a deserved point.

It leaves Derby without a home Championship win this season and they stay bottom of the table, four points adrift of safety.

Rooney - who admitted he is still waiting for a decision on his managerial future - reacted to Saturday's draw with Wycombe by making five changes but it was Coventry who came closest to taking an early lead.

Tyler Walker got down the Derby right in the 11th minute and whipped in a dangerous cross which Callum O'Hare just failed to connect with as he arrived at the back post.

Derby's defence was caught out by a long ball seven minutes later but Jordan Shipley could not get enough power on his header to trouble goalkeeper David Marshall.

It was 30 minutes before Derby created a chance with Kazim-Richards spinning away from a defender but he fired across Ben Wilson and wide.

A mistake by Matt Clarke three minutes later put O'Hare in but he stumbled as he went around Marshall and the ball rolled just wide.

Derby were getting into some threatening positions on the right and they had a great chance just before the break when a low cross was touched to Max Bird but his shot was too close to Wilson who turned it behind for a corner.

Both teams had shown plenty of intent and there were chances at either end at the start of the second half with Derby convinced they should have been awarded a penalty.

Tom Lawrence burst into the box and went down under a challenge but referee Dean Whitestone waved play on.

Kazim-Richards headed over a minute later but Coventry had a good chance just after the hour mark when O'Hare glanced a header just wide.

Derby's best moments came when they got the ball wide and when Jason Knight delivered from the right, Lawrence could not keep his shot down when the ball broke to him 15 yards out.

Coventry had headed well but a poor clearance in the 80th minute allowed Lawrence to shoot from the edge of the box but it was straight at Wilson.

Just when it seemed like Derby would again be frustrated, Kazim-Richards broke the deadlock in the 83rd minute when he squeezed a header past Wilson from Nathan Bryne's cross.

Jack Stretton should have finished it but hit the top of the crossbar and Coventry took advantage when Hamer drilled a low shot past Marshall after a cross was only half-cleared for a share of the spoils.

Derby's Wayne Rooney: "I honestly don't know (if I'll be in charge), as I've said I'm confident in this job and this role and of course I would love to do the job. If not, I'll be here as a player but we've put plans in place and if they're not to be, at least the players have stability of knowing the plans for the next few weeks and can have something to work to. Hopefully the quicker the new ownership is done the better because I think a decision does need to be made.

"I've been asked to take the team until a decision is made and that's what I'm doing so the quicker the decision is made - not just for the players but for all the staff at the football club - the more stability we can get and more plans put in place for the future."

Coventry's Mark Robins: "I don't think we played particularly well but a never-say-die attitude is there, the togetherness and camaraderie from last season's there, you can see it growing. I don't think players up and down the country get enough credit in this pandemic.

"The levels are outstanding considering you've got your training, travelling, games coming every three days, lots of injuries, young players coming in and the levels they are getting to should be applauded. I think you can forgive them for flat performances from time to time but to get to the levels they're at is outstanding."