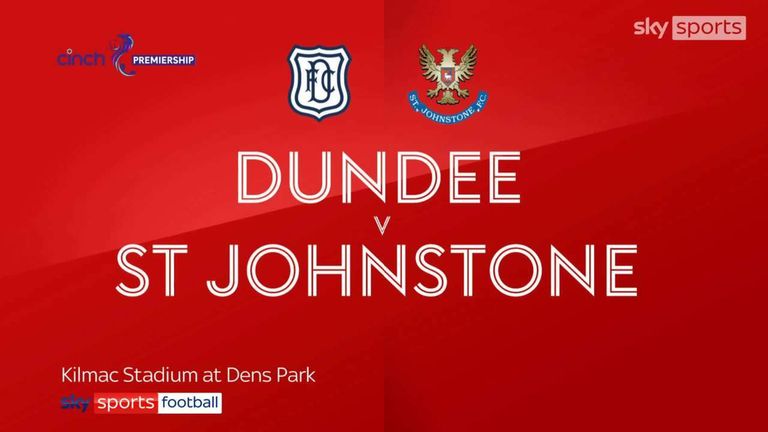 Highlights of the SPFL match between Dundee and St. Johnstone

Dundee secured back-to-back Scottish Premiership wins for the first time this season thanks to a 1-0 victory over St Johnstone at Dens Park.

The home side were in a confident frame of mind after beating Motherwell 3-0 at home on Saturday.

And they picked up where they left off against Saints, deservedly taking another three points thanks to a first-half Danny Mullen goal.

The result lifts the Dark Blues up to ninth in the table, above their opponents whose winless run stretched to three league games.

Dundee were quickly into their stride and had a half chance in the first minute but Luke McCowan's shot from the edge of the Saints' box was blocked.

Home skipper Charlie Adam then had an opportunity of his own from a Paul McGowan corner but St Johnstone goalkeeper Zander Clark comfortably held his headed effort under his crossbar.

Dundee goalie Adam Legzdins was called into action shortly after when Ali Crawford whipped in a free-kick from the left with the 'keeper having to acrobatically punch the ball away to safety.

Adam was in the mood and the former Scotland and Rangers midfielder produced another moment of magic, sending a superb crossfield pass to Paul McMullan galloping down the right but the winger's composure deserted him as he advanced into the Saints' box and his shot flew well wide.

McGowan came close to breaking the deadlock in the 36th minute when he hit a superb shot from 22 yards that clipped the outside of Clark's left-hand post.

However, the Dark Blues did take the lead just three minutes later. McGowan played a pass into the feet of Mullen 16 yards from goal and the striker turned smartly before firing low past Clark for his second goal in successive games.

Saints looked to hit back straight away and Eetu Vertainen tried his luck from long range but his shot was easily gathered by Legzdins.

Just three minutes after the restart, Dundee came close to doubling their advantage. Jordan Marshall sent a cross in from the left with Mullen producing a superb header that Clark tipped over his bar.

St Johnstone did have a chance on the break but Vertainen's final pass to Chris Kane was too heavy and the opportunity was lost.

Dundee had a great opportunity to put the game to bed in the 82nd minute, but McMullan shot just over with the goal at his mercy.

Dundee manager James McPake: "It should have been more but I'll take it. St Johnstone are a very good side - that's the fourth time I've played Callum's team and that's the first time I've won.

"We should have been more comfortable but what we saw at the end was real heart and real desire not to concede.

"We outfought them which is one of their strengths but they have good players and a very good coaching team. Tonight we were the better team and the better team won the game.

"Big Zander Clark - every time we play against him he does my head in because he pulls off saves. He's been the difference before but it changed tonight and I'm delighted for my players."

St Johnstone manager Callum Davidson: "I'm bitterly disappointed. What we pride ourselves on is hard work, our defensive shape and our attitude to win the ball. That was lacking I thought. They were better all over the pitch.

"When you do that you make it really hard for yourselves to win a game of football. That cost us.

"That's probably the most disappointing thing [being outfought]. I said that after. In any game it's important how you battle and fight.

"It's never easy to win a game. We had a good travelling support on a cold Wednesday night and didn't do it justice."

Dundee travel to champions Rangers, while St Johnstone host Ross County, with both Scottish Premiership games kicking off at 3pm on Saturday.