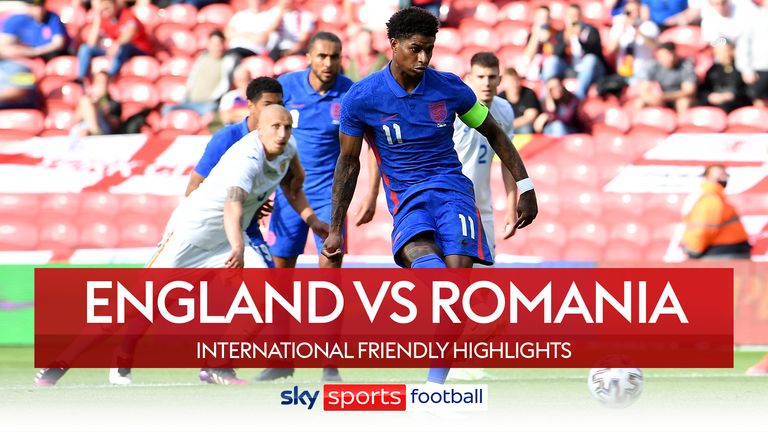 Highlights of the international friendly between England and Romania.

Marcus Rashford's penalty completed England's Euro 2020 preparations with a 1-0 win over Romania, as Jack Grealish starred at the Riverside Stadium.

Once again there were some boos as the players took a knee before kick-off and the home fans showed their displeasure at the break, too, after a lacklustre first half from Gareth Southgate's much-changed side, who had hit the woodwork twice through Dominic Calvert-Lewin and Jadon Sancho.

However, standout performer Grealish was tumbled in the penalty area moments after moving into the front three in the second half for Rashford to roll in the spot-kick (68), before debutant Sam Johnstone pulled off a stunning close-range save to ensure England made it two wins from two from their warm-up games.

Half-time sub Jordan Henderson - making his first appearance since mid-February - saw a penalty saved from a second spot-kick and Jude Bellingham was somehow denied when Vlad Chiriches deflected his header onto the bar late on but importantly there were no more major fitness concerns, following Trent Alexander-Arnold's injury against Austria.

Southgate - who is yet to name Alexander-Arnold's replacement - is likely to ring the changes once again for next Sunday's Euros opener against Croatia at Wembley, when the six Manchester City and Chelsea Champions League finalists, who were left out of the squad against Romania, will come into contention.

How England completed their warm-ups with a win...

Southgate had made nine changes from Wednesday's win over Austria but, with Chelsea and Manchester City players still absent from the squad, the XI lining up against Romania was still some way off the side expected to start against Croatia when the Euros get under way next weekend.

However, Tyrone Mings, who is likely to be involved next Sunday, contributed to a sluggish start from the hosts, with an early mis-control allowing Romania a corner in the opening minutes, before Alexandru Cicaldau and Camora combined to get the better of Ben Godfrey to tee up Razvan Marin for a shot at Johnstone.

Gareth Southgate made nine changes to the side which beat Austria, with only Jack Grealish and Tyrone Mings keeping their places. Sam Johnstone, Ben Godfrey and Ben White were handed their full debuts but no Chelsea or Man City player made the squad. Jordan Henderson was named on the bench.

England also took a while to get going at the other end, with Jadon Sancho, Grealish and Godfrey off target with ambitious efforts before Rashford rightly had a penalty appeal waved away when he went down too easily from Chiriches' challenge.

England rattled the crossbar on 31 minutes, though, when Calvert-Lewin met James Ward-Prowse's free-kick with an impressive header from 16 yards, and Sancho did the same eight minutes later after combining with Grealish, bending a curling shot onto the woodwork from just inside the box.

Johnstone was tested for a third time when Deian Sorescu ran off Luke Shaw to fire on target just before the break but England were back on the front foot at the start of the second half, with Calvert-Lewin somehow unable to turn home a superb Ward-Prowse wide free-kick.

Romania remained a threat, with Cicaldau getting in behind Ben White and shooting wide of the near post before Rashford shot wide of the far post after breaking forwards - but changes on 65 minutes for both teams led to the breakthrough.

With underwhelming Sancho withdrawn, Grealish was pushed into the front three and immediately made an impact. Darting into the box from the left side, the Aston Villa ace was tripped by Romania sub Tiberiu Capusa and Rashford made no mistake from the spot, rolling in his 12th international goal.

Romania looked certain to come up with an instant reply when a loose ball in the England box came to Andrei Ivan six yards out but Johnstone pulled off a brilliant block to deny him.

Chiriches caught Grealish soon after with a stray boot to the back of the head but was even more careless when he bundled into Calvert-Lewin in the box to hand England a second penalty-kick. However, Henderson - who came on at half-time to build up his fitness after almost four months out of action - saw his effort comfortably stopped by goalkeeper Florin Nita.

Chiriches was more impressive with his block to deny Bellingham and, like Austria, Romania set up a late charge for an equaliser. But once again England held firm and can now turn their attentions to the serious business of Croatia in the Euros next week.

What the manager and players said...

England boss Gareth Southgate to ITV: "We had chances to make it more comfortable, but so did they. I thought the first half, we didn't work hard enough without the ball. We were too stretched, didn't press well and that meant our back and midfield players had a lot of ground to cover.

"After half-time, we improved, it was helpful we went to 4-3-3 for this game, and I've got to say for us it was a really good exercise. We learned a lot from the game, the players needed the minutes. It's good to get the win, and there's a lot to get better at.

"We had Rashford on penalties and then Ward-Prowse, they'd both come off. We were expecting Dominic to take it, I was expecting Henderson to walk over and make sure he took it - so I'll see what his thought process was there.

"[In terms of Alexander-Arnold's replacement] We just want to check how we are after the game medically, and make sure there's nothing else we have to go through - but we'll make that decision in the next 24 hours."

England midfielder Jordan Henderson to Sky: "It was good to get back on the pitch for 45 minutes after a while out, it was important physically and mentally to get some minutes.

"I've trained for a long time, overall pitch work, but the last few weeks, the back end of Liverpoo'ls season and now with England, I've been with team training, and adapting for the last two or three weeks in terms of that, but today I've had that much training I felt really good. It was nice to be back and important to get minutes. We're going to need all the squad, I've seen it happen many a time before, I'm just going to keep working hard and be ready.

"I've missed bigger penalties than that, but I'm disappointed of course. I felt more sorry for Dom, he let me have it, but unfortunately I couldn't find the goal. I'm not fussed, I'm just happy to be back." 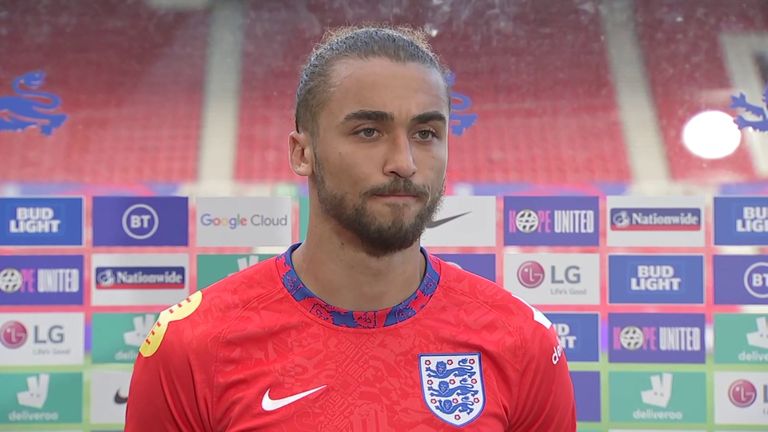 Dominic Calvert-Lewin was pleased with his outing against Romania ahead of the Euros, but says in hindsight he potentially should have taken England's second penalty after Jordan Henderson saw his effort from the spot saved.