Match report and free highlights as Gylfi Sigurdsson's penalty inflicts second Premier League defeat of the season on Chelsea; Blues were unbeaten in 17 matches ahead of trip to Merseyside; Everton welcome 2,000 fans back into Goodison in style to move up to seventh 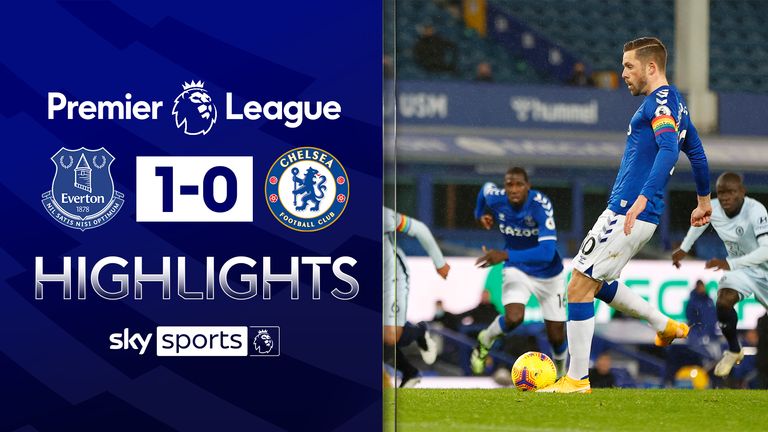 FREE TO WATCH: Highlights from Everton's win over Chelsea

Gylfi Sigurdsson's first Premier League goal of the season ensured Everton secured a 1-0 win over Chelsea to end the Blues' 17-match unbeaten run in all competitions.

With 2,000 supporters back in the stands at Goodison Park, Sigurdsson's calmly-slotted 22nd-minute penalty after Edouard Mendy had fouled Dominic Calvert-Lewin proved to be enough to secure all three points for Carlo Ancelotti's side.

Mason Mount struck the woodwork twice in the second period, while Everton were denied a second penalty after a VAR review showed Calvert-Lewin to have been in an offside position in the build-up.

The result moves Everton up to seventh in the table after only a second win in eight Premier League games while Chelsea remain third, two points behind leaders Tottenham.

Man of the match: Michael Keane.

How Ancelotti got the better of Lampard

By the end of this battling home performance, the 2,000 supporters inside sounded like 20,000 as the Grand Old Lady shook for the first time in nine months. Chelsea arrived on Merseyside with plenty of swagger, but Lampard warned his side against dropping standards ahead of the busy festive schedule.

Everton shaded the opening 10 minutes with Sigurdsson setting up Richarlison for the game's first chance, but the Brazilian's shot was tame and straight at Mendy. Sigurdsson was the provider once more as his corner was headed over by Yerry Mina as the visitors struggled to find their rhythm.

Everton were compact and limited Chelsea to hopeful crosses in the opening half, and midway through it, Carlo Ancelotti's side were presented with the opportunity to take the lead in route one fashion. Jordan Pickford's punt downfield was won in the air by Calvert-Lewin, who then ran onto his own lay-off before being wiped out by Mendy.

It was as straightforward a penalty decision as you are likely to see all season - and Sigurdsson made little fuss of the ensuing spot-kick, giving Mendy the eyes as he rolled the ball to his left.

Chelsea sought an immediate response, and very nearly restored parity within two minutes when Reece James hit the post as Everton failed to clear a corner, with replays showing Pickford had got the slightest of touches to the effort.

Kurt Zouma, on his return to Goodison following his year-long loan spell during the 2018/19 campaign, then latched onto Olivier Giroud's knock-down but fired straight at Pickford. Everton were happy to play on the counter and Richarlison ought to have done better when released again by Sigurdsson but his shot failed to trouble Mendy.

After numerous changes for the Champions League in midweek manager Frank Lampard reverted to the team which beat Leeds last weekend with the one alteration being Mateo Kovacic coming in for the injured Hakim Ziyech.

With 1,500 in the Gwladys Street and another 500 in the Top Balcony - there was no such semblance of behind-closed-doors fatigue as Lampard considered a tactical reshuffle. Everton had won their previous six league games in which they led at half-time - but Mount very nearly levelled within a minute of the restart.

Thiago Silva's long ball was punched clear by Pickford, but with the England No 1 stranded out of his goal, N'Golo Kante set up Mount, whose shot grazed the crossbar.

Everton then threated a second as Sigurdsson released Richarlison down the left and his right-foot shot was parried away by Mendy. The Iceland international was enjoying himself in the absence of James Rodriguez as his deep cross was then taken off the head of Calvert-Lewin by Mina.

Chelsea continued to press and were very nearly punished for their high line as Alex Iwobi released Calvert-Lewin before the striker was fouled inside the box by Ben Chilwell, but upon review, VAR Andre Marriner correctly overturned the decision for offside in the build-up.

The flashpoint checked Chelsea's momentum as Lampard turned to Tammy Abraham for the final 20 minutes, but it was from a dead ball where the visitors very nearly levelled. Abdoulaye Doucoure upended James, and from the ensuing free-kick, Mount struck the foot of Pickford's post.

By then, Ancelotti knew it would be his night as Chelsea surrendered the chance to move top.

Everton boss Carlo Ancelotti: "We needed this performance and these points. After a difficult period, we're able to move on and we're showing more consistency. Tonight, the performance was really good. You cannot beat Chelsea without a good performance.

"Defensively we were really good. We didn't give up many opportunities, just two outside of the box. I think we were really well organised with defenders and midfielders. The way the team fought was top-class.

"The fans made a lot of difference. It was a total different atmosphere. We only had 2,000 but the atmosphere was completely different. I hope the crowd can be full as soon as possible. I think we started really well. After that, we lost a little bit our confidence and attitude.

"We have a really tough game coming up on Wednesday so I hope I see the same attitude and spirit. We won today because of the spirit not because of the way we played. I want to see that spirit again against Leicester."

Chelsea boss Frank Lampard: "I feel we could've got something out of the game but we didn't pepper their goal. We had the opportunities to get at least a point but we weren't at our best. Once it went to 1-0, we gave ourselves a problem and we didn't do enough to break them down.

"Edouard has been fantastic since he's been here, but I don't think t was just his mistake. The mentality of the whole team wasn't good to cut out the ball. When you give them a head start in this stadium against this team, it's very difficult. It wasn't really us for the first time in a while.

"I keep reading how we've got the strongest squad in the league but I don't understand it. The teams who have won the league in recent years have squads that are littered with wingers who have score da lot of goals but we're in a position where we are a work in progress. We will have nights like this. I don't like them but we will have to bounce back strong. Let's see what happens on Tuesday."

Man of the match - Michael Keane

Ancelotti highlighted the spirit of his side as Everton kept a first clean sheet since the opening day of the season at Tottenham. Integral to that was the display of Keane alongside Mina.

Giroud has enjoyed prosperous outings in the past at Goodison in the colours of Arsenal, but here he was reduced to scraps as the England centre-back produced nine clearances, more than any other player.

Keane was always in the right place to snuff out the danger, but this was a collective triumph from back to front that Ancelotti will now want to use as the template moving forward - as Duncan Ferguson did at the start of his reign as caretaker manager against Chelsea 12 months ago.

Everton travel to face Leicester on Wednesday at 6pm while Chelsea are at Wolves a day earlier; kick-off at Molineux is at 6pm.