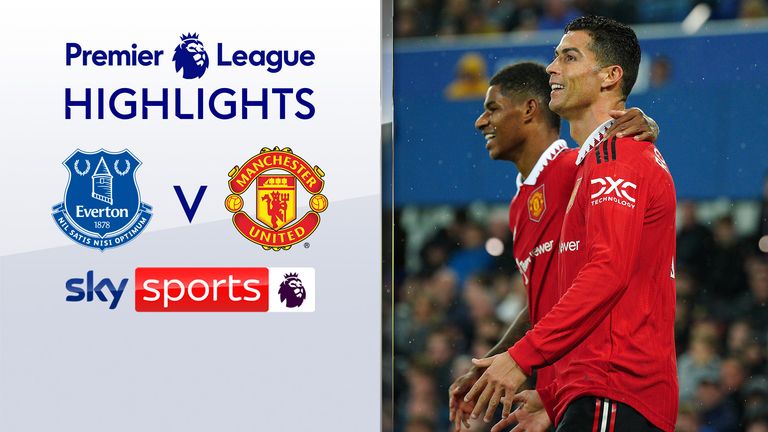 FREE TO WATCH: Highlights from Manchester United's win against Everton in the Premier League

Cristiano Ronaldo came off the bench to score his 700th club goal as Manchester United came from behind to win 2-1 against Everton at Goodison Park.

After Antony cancelled out Alex Iwobi's early strike, an injury to Anthony Martial presented Ronaldo with his opportunity inside the first half and he did not waste it, scoring his first Premier League goal of the season before the break.

Marcus Rashford thought he had made it three late in the game but his goal was ruled out for an inadvertent handball. But though Everton pushed hard late on in pursuit of an equaliser, it came to nothing as Manchester United secured a deserved win.

The result, a fifth Premier League win in six games for Erik ten Hag's side, sees United bounce back from their derby defeat and lifts them up to fifth in the table. Frank Lampard's side are down in 12th, their unbeaten six-game run at an end.

Player of the match: Casemiro

How Man Utd turned it around at Everton

Everton had enjoyed the ideal start. The in-form Iwobi curled the ball beyond David de Gea from well outside the penalty box to spark wild celebrations among the home support. It was another sluggish start by United, Casemiro culpable as he was dispossessed.

But Everton were unable to build on that lead and were punished midway through the first half when Antony finished expertly after being put through by Martial. They only had themselves to blame as Idrissa Gueye lost the ball. It was a sign of things to come.

There was just the one change to the Everton team that won at Southampton with Frank Lampard recalling Anthony Gordon as Dwight McNeil made way.

Erik ten Hag made four changes to the team that were beaten by Manchester City. Victor Lindelof came in for Raphael Varane, while Casemiro replaced Scott McTominay and Luke Shaw was preferred to Tyrell Malacia. The other switch was the return of Anthony Martial in favour of Jadon Sancho.

There was another warning when Casemiro headed wide when unmarked. Give Ronaldo that space and the result is inevitable. That happened when Iwobi was tackled by Casemiro and the Brazilian threaded a pass through to Ronaldo who raced free of Conor Coady.

His low left-footed shot beat Jordan Pickford and that long-awaited landmark goal was his. His only previous goal this season came from the penalty spot in the Europa League. This, his first goal at Goodison Park, was a reminder of the qualities of the Ronaldo of old.

It was Ronaldo's header that set up Rashford for what looked to have secured the points late on but the England international was adjudged to have handled the ball after it bounced up off James Tarkowski before rounding Pickford and putting it away.

In the final stages, Everton came close to making the most of that reprieve with James Garner forcing a good save from De Gea and Pickford himself almost getting his head to a cross in stoppage time. But United held on. One more winner for that man Ronaldo.

Ten Hag happy with the reaction

"Quickly 1-0 down. But the reaction of the team is good," said Ten Hag when speaking to BT Sport after the game.

"That's one of our aims, to respond well to setbacks.

"First half we were pressing well. It was difficult for them to come into the game. Happy with that.

"It's difficult here, the crowd behind them. But also they are in a really good way. They are difficult to score against, but we scored two - maybe three."

"The game was lost in the first half from our point of view," Lampard told BT Sport.

"It's a performance short of where we have been and against a team of quality like Manchester United if you make mistakes, turnovers that lead directly to goals, it is a big threat and always has been.

"It was a great start and in effect it made us a little bit passive in our game. We sat in there. We had to correct that at half-time because we were late to things. I didn't like some of that stuff. It was better in the second half and we showed a lot of spirit in the end.

"I applaud that but it is disappointing because of where we are at. We have been moving in the right direction and we just get checked. It might not be the worst thing in the long term."

Casemiro has had to wait for his first Premier League start. He first came off the bench in August but after four substitute appearances, here he was in the starting line-up. He helped make the difference in the end but only after some difficult moments at Everton.

Bundled off the ball in the build-up to Iwobi's opening goal, he also surrendered possession before what turned out to be Manchester United's winner. Fortunately, he quickly retrieved it before measuring his pass through for Ronaldo to score.

The Brazilian has produced more convincing performances in his long and distinguished career but this was an important one for his new manager because it hinted at the greater stability that he might provide for this team when he is fully up to speed.

Casemiro made four tackles in the game at Goodison Park - twice as many as anyone else on the pitch. That ability to provide a defensive screen ahead of the defence will be crucial if Ten Hag is to succeed. Passes such as the one for Ronaldo's winner? They will help too.

Everton's trip to Tottenham is live on Sky Sports Premier League next Saturday evening, before Frank Lampard's side visit Newcastle on October 19.

Man Utd host Omonia in the Europa League on Thursday, before they are back at Old Trafford to face Newcastle on Sunday.