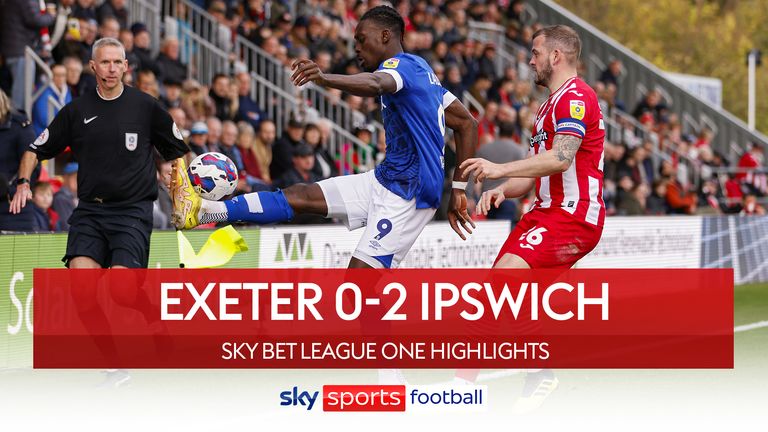 Ipswich moved to within two points of Sky Bet League One leaders Plymouth after a 2-0 win over Exeter at St James Park.

Freddie Ladapo headed in his fifth goal in as many games in all competitions to give Kieran McKenna's men the lead and Marcus Harness helped himself to a second after the break to round off a routine victory in Devon.

Exeter managed just one shot on target throughout the match, with forwards Jay Stansfield and Jevani Brown unable to impose themselves on the game sufficently.

The Tractor Boys stay in second despite putting pressure on Argyle, while Gary Caldwell's Grecians drop to 11th, five points outside the play-off positions.

The first league meeting between the teams since April 1957 started at a pedestrian pace - and, in truth, continued throughout the first half at St James Park.

Ipswich were already top of the away form table in League One, though, and so it came as perhaps little surprise when they took control of the game and almost nudged ahead when Harness' connection was kept out by Jamal Blackman at point-blank range.

But they did take the lead very shortly afterwards, when Harness capitalised on some questionable defending from the hosts to cushion the ball for Ladapo to head home his ninth goal of the season.

Exeter did respond well to falling behind, and though Brown and Stansfield found it hard to get into the game, Alex Hartridge forced a sharp save from Christian Walton after the visitors struggled to clear their lines from a corner.

Grecians goalkeeper Jamal Blackman made two superb stops in a matter of minutes to deny Wes Burns and Ladapo, but he was beaten for a second time midway through the second half, when Harness lost his marker and glanced in a header to make sure of the win.

Player of the match - Marcus Harness

Ipswich are back in action on Tuesday, November 22 at 7.45pm, when they face Portsmouth in the last-32 of the Papa John's Trophy.

Meanwhile, Exeter return on Saturday, November 26, when they travel to the Kassam Stadium to take on Oxford United at 3pm in the FA Cup second round.