Free match highlights and report as Adama Traore scores first goal of the season in the closing stages of stoppage time; Willian Jose had goal disallowed for marginal VAR offside in the first half; Fulham now three points behind 17th-placed Newcastle, but having played two more games 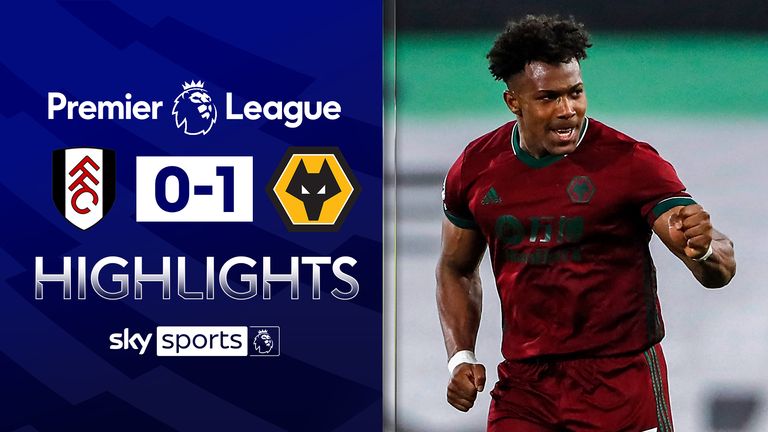 Adama Traore's 92nd-minute stunner gave Wolves a 1-0 victory over Fulham to sink the Cottagers deeper into the relegation mire.

Ruben Loftus-Cheek glanced a fine chance wide of goal in the first half for Fulham, before Wolves' Willian Jose had a header ruled out in first-half stoppage time, with VAR intervening to find Daniel Podence offside by a matter of centimetres in the build-up.

That call looked to have saved Fulham a point, having failed to muster up a clear-cut chance in the second half, but Traore broke in the closing stages of stoppage time to score his first goal of the season, lashing home from an acute angle on the break past Alphonse Areola, who should have done better.

The result means Fulham are three points off 17th-placed Newcastle, but having played two more games, with Newcastle travelling to Burnley on Sunday, live on Sky Sports. Wolves move up to 12th on 38 points.

Man of the match: Conor Coady

Neither side registered a shot on target in the first half - in fact, Fulham and Wolves have scored just two first-half goals in their last 12 Premier League games - but chances still came at both ends.

Willian Jose glanced Nelson Semedo's cross wide in the second minute, while at the other end, Ruben Loftus-Cheek missed a fine chance to put Fulham ahead, himself turning a Terrence Kongolo delivery wide of the far post, Fulham's first shot after nearly half an hour.

Wolves were forced into a personnel and formation change shortly after; Pedro Neto was replaced by Ruben Neves, prompting Nuno's side to go from a back four to a back five, and they thought they'd had the lead just before the break following a fine move.

Conor Coady's fine diagonal down the right flank found Semedo, who slipped in Podence, and his cute, lofted delivery was headed home by Willian Jose from eight yards, for what he thought was his first goal for Wolves on the 12th attempt.

However, VAR intervened, disallowing the goal for a offside on Podence as he received the initial pass from Semedo, with barely a couple of centimetres in it.

The second half was somehow even more cagey than the first as both defences cancelled each other out, with neither side willing to take much of a risk to break the deadlock.

Bobby Decordova-Reid found a yard to shoot from the edge of the box, but fired wired off balance, while Antonee Robinson's right-footed half volley from range tested Rui Patricio.

But Wolves broke in the last minutes of the game and stunned the hosts with a goal out of nowhere. Traore, criticised this season for his lack of end product after registering six goals and 13 assists last season, scored his first goal of the season after his first assist on Monday.

There were two changes for Fulham; Ademola Lookman, who didn't recover sufficiently to be involved in the squad was replaced by Antonee Robinson, and Tosin was replaced by Terrence Kongolo in defence.

Nuno Espirito Santo named an unchanged team from the one beaten by West Ham on MNF - keeping faith with the back four he has persevered with this season despite mixed results. Joao Moutinho was fit enough for a place on the bench.

Sub Fabio Silva found Traore down the right flank, and despite beating Kongolo in the box, the Spain international had no right to score from the angle, but he lashed past Areola high at his near post to take the posts.

Nuno: VAR not in spirit of game

"This is not the spirit of the game, I hope football can find a solution. When the stadiums are full again it's hard to explain to thousands of people that one hand is offside."

On Traore's winner: "Adama can produce amazing things, his talent, his speed, his character and the way he works. He really works for moments like this.

"Justice is not the word. We looked for it [the winner], we worked hard for it and we got our goal in the end. I'm happy for the boys. The response to Monday was really good."

Parker: Most painful night this season

"It's a tough one to take. It's not going to be a tough one to bounce back from. It's a painful one tonight. You can see how desperate this team are to be successful. I asked the team to show fight and desire, to leave everything on the pitch, and to a man we did that.

"What's going to be the deciding factor is that sometimes when you get put to the canvas, the real character is for someone to get back up. We're going to need to do that. We've done that for large parts this year.

"I thought we did everything. We limited them to very few chances, and then the longer the game goes on, we commit more men, we want to win the game, but it didn't quite fall for us. The game has been decided in the last minute, and that's painful of course.

"It is a blow, but picking them up is honestly not my concern. We've been in this situation, and of course while tonight is probably one of the most painful this year in terms of how the game finished, there's other issues we need to learn from. We're deflated, we're hurt, but as always this team will come back stronger, come back fighting, and we'll go again.

"Can we go and win at Arsenal? Of course we can. Nobody expected us to win at Liverpool or Leicester, we've done that through resilience, and that gives me belief."

Analysis: Fulham have the desire, but not the quality

"Scott Parker's post-match interview was all about Fulham's character, their resilience, their will to win. But all the will in the world couldn't force Rui Patricio into a real save all night as Fulham handed the initiative firmly to Newcastle in the relegation dogfight.

"The story to Fulham's predicament is a simple one - only Sheffield United have scored fewer goals this season. While the Cottagers have lost only two games more than Leeds, 11 draws and just five wins have halted their push to stay up.

"Parker will be praying Newcastle don't take advantage of Fulham's latest slip-up. Steve Bruce's side could have a nine-point gap over the bottom three, in theory at least, if they win both of their games in hand over Fulham.

"Realistically, with games against Arsenal and Chelsea next up, Fulham's hope lies in that last-day game with Newcastle in west London. But unless they can get back to their brief resurgence earlier in 2021, get more bodies forward and get Josh Maja and Aleksandar Mitrovic firing, it may well be too late by then."