Guinea-Bissau 0-2 Nigeria: Super Eagles only side to qualify for AFCON last 16 having won all three group games

Report and free highlights as Nigeria become the only side at this year's Africa Cup of Nations to win all three group games; Goals from Sadiq Umar and William Troost-Ekong give Super Eagles comfortable win over Guinea-Bissau; Nigeria finish top of Group D as Egypt qualify as runners-up 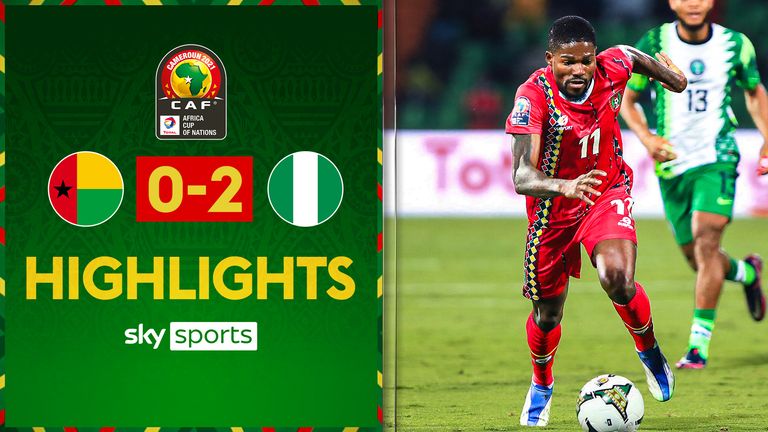 Nigeria beat Guinea-Bissau 2-0 to qualify for the Africa Cup of Nations knockout stages as the only side at this year's tournament to win all three group games.

Striker Sadiq Umar scored his first goal for Nigeria to ensure a full haul of nine points in Group D and oust their opponents in Garoua from the tournament.

Umar, who has been criticised for some glaring misses in previous games, netted when Kelechi Iheanacho's excellent pass with the outside of his boot across the goal provided a tap-in for the tall forward at the back post.

Nigeria were in cruise control and scored a second as captain William Troost-Ekong netted from close-range after Moses Simon had hit the crossbar following a mazy run into the box.

Nigeria had already won the group before kick-off, but became the only team to enter the second round with three wins. Egypt finished second with six points, while Guinea-Bissau and Sudan ended with a point each.

The result ensured Cape Verde and Malawi advance as two of the four best third-placed teams in the group stages, with the latter reaching the knockout rounds for the first time.

Nigeria have been slick and stylish in the matches to date and while not quite at their best in this one, coach Augustine Eguavoen was able to make eight changes with the job already done in the group.

Guinea-Bissau have now failed to score in their last seven AFCON matches spanning three finals, the first time a side has gone so long without a goal. They are also waiting for their first-ever win.

They rarely threatened Nigeria and the closest they came was a free-kick that whistled just past the post with Nigeria goalkeeper Francis Uzoho struggling to make up the ground.

There was a long VAR check for a potential offside on Nigeria's second goal after 75 minutes as Troost-Ekong reacted quickest to turn the ball home, but the decision eventually went his way in what looked a tight call.