Marc McNulty capitalised on a poor clearance from stand-in goalkeeper Kyle Gourlay to net in the sixth minute and Accies missed a string of chances to level either side of half-time; Hamilton now two points behind Kilmarnock and three behind Ross County 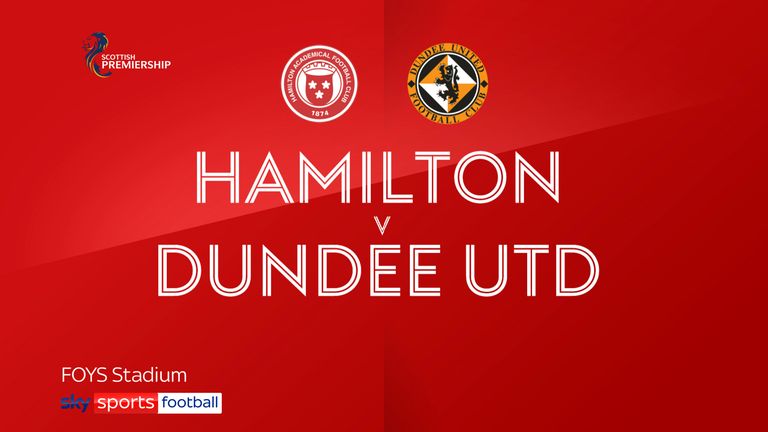 Highlights of the Scottish Premiership match between Hamilton Academical and Dundee United.

Hamilton were left further adrift at the foot of the Scottish Premiership after gifting Dundee United striker Marc McNulty an early goal in a 1-0 home defeat.

McNulty capitalised on a poor clearance from stand-in goalkeeper Kyle Gourlay to net in the sixth minute and Accies missed a string of chances to level either side of half-time.

Gourlay had come into Brian Rice's injury-hit team after first-choice keeper Ryan Fulton dislocated his knee while slipping as he walked out of his house on Monday.

Rice could only name six of a potential nine substitutes and his luck did not change as his side had 27 shots at goal and forced 10 corners without scoring.

The Lanarkshire side are now two points behind Kilmarnock and three behind Ross County after their relegation rivals drew at Rugby Park.

Accies started on the front foot and Scott McMann had a shot beaten away by Benjamin Siegrist before Gourlay's error.

The 22-year-old kicked the ball straight to Jeando Fuchs whose instant pass sent McNulty clean through, and the striker made no mistake.

United could have built on their lead and McNulty and Lawrence Shankland both had a couple of efforts off target.

But Accies settled down again and created a series of chances. Siegrist got down to push away strikes from McMann and Kyle Munro, Ronan Hughes curled just wide, Hakeem Odoffin headed into the side net from McMann's cross and Ross Callachan missed two chances from close range.

Hamilton were living dangerously at times and Hughes blocked well from Adrian Sporle after the hosts found themselves outnumbered at a counter-attack.

Rice's team remained in the ascendancy after the break. Siegrist saved well from Callachan before Munro missed two chances from inside the box and Hughes headed wide.

A week after Rice's tirade about penalty decisions, Accies had a spot-kick claim denied when Bruce Anderson checked inside Mark Reynolds and went down. Bobby Madden decided he had slipped.

The home chances kept coming. Play opened up for Odoffin 20 yards out but Siegrist turned his shot past at full stretch. Anderson then fired over from 12 yards after being set up by Lee Hodson.

Accies appeared to run out of steam midway through the half and Rice made his first change in the 79th minute when striker Callum Smith replaced centre-back Brian Easton.

United remained on top though and had their own penalty claim rejected when Madden gave a corner following Odoffin's slide tackle on substitute Louis Appere. "Stonewaller," cried United boss Micky Mellon in vain.

McMann went down in the other penalty box in stoppage-time under the attention of Peter Pawlett as Accies threw men forward but there was to be no late drama.

Hamilton now host Motherwell in the Scottish Premiership at 6pm on Wednesday April 21, while Dundee Utd go to Forfar Athletic in the Scottish Cup fourth round at 7.45pm on Friday.