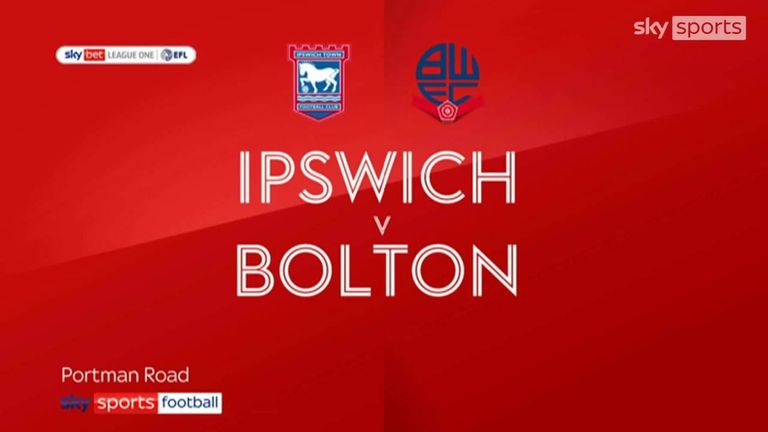 Highlights of the Sky Bet League One match between Ipswich Town and Bolton Wanderers.

High-flying Bolton pulled off a stunning 5-2 comeback victory over Ipswich in a pulsating League One encounter with five goals coming in a blistering opening half.

Dapo Afolayan struck in the 10th and 47th minutes, Eoin Doyle from the penalty spot after 18 minutes, Josh Sheehan two minutes into the second half and George Johnston three minutes before the hour.

The hosts opened the scoring through Macauley Bonne in the fifth minute with Wanderers' Ricardo Santos putting the ball into his own net after 30 minutes to level matters.

Wes Burns shrugged off the attention of Liam Gordon and crossed for Bonne to steer the ball home for the opener, then Afolayan was on hand to equalise for the visitors who took the lead when Kane Vincent-Young fouled Afolayan in the penalty area and Doyle converted the resulting spot-kick.

Burns' cross from the right was turned past his own goalkeeper by Santos and Afolayan scored his second just before the break to give the visitors a 3-2 lead.

Slack defending by Ipswich led to Sheehan and Johnstone adding the fourth and fifth goals and Bonne struck the base of the post as a host of boos greeted the final whistle as the home side sit 22nd in the table as Bolton are third.