Match report as Giacomo Raspadori sinks England in Milan and relegates them from Group A3 to League B of the Nations League with one game still to play; Italy also hit the post twice as England's wait for open play goal stretches to five matches; Gareth Southgate booed after full-time

England were relegated to League B of the Nations League with a worrying 1-0 defeat away to Italy which ramps up concerns about the prospects of Gareth Southgate's side two months out from the World Cup.

The England boss will be left in no doubt about the feelings of the fans as he was again booed after the game, just as he was following the defeat to Hungary in June. "It's an understandable emotional reaction," said Southgate, whose side are now without a win in five - their worst run in eight years - and have major problems to address before they go to Qatar.

After an uninspiring first half in Milan, where England's 3-4-3 system and Bukayo Saka's role at left wing-back didn't look right, they were undone on 68 minutes when Napoli's Giacomo Raspadori was allowed to bring down a long ball in the box and bend into the far corner after Kyle Walker stepped off.

Italy have been badly out of sorts since they beat England at Wembley last summer to win the Euros, failing to qualify for the World Cup, but they could have scored several more on Friday night. Gianluca Scamacca's header was tipped onto the bar by Nick Pope early on after the striker out-jumped under-pressure Harry Maguire, and Giovanni Di Lorenzo slid in to shoot against a post in the final minutes.

It wasn't just the Three Lions' well-documented problems in defence on show here, though. Five games into this Nations League campaign England are yet to score from open play. San Marino are the only other side without a non-penalty goal in this edition of the competition.

A double save from Gianluigi Donnarumma to deny captain Harry Kane from a tight angle was close as they came to a breakthrough in Milan.

It is 22 years since England last went three consecutive internationals without a goal - November 2000.

Those chances came after Southgate belatedly switched to a back four but, from formation to personnel, the England boss appears to have plenty of questions to answer and dilemmas to solve if he is going to find a formula for this group to repeat or better their major tournament performances under him.

Nineteen-year-old Jude Bellingham may have impressed and Phil Foden fleetingly showed glimpses of his skill but the warning signs from four poor Nations League displays in June have now gone up a level with Qatar fast approaching. A response against Germany at Wembley on Monday is now essential.

In search of some solidity before the World Cup, Southgate stuck by his regular defensive leader Maguire in Milan but that move nearly backfired five minutes in when the struggling Man Utd centre-back was beaten in the air by Scamacca.

A tame header at the other end was at least a reminder of Maguire's threat on the front foot but while he grew into the game his team-mates struggled to click in a 3-4-3 system which left them packed at the back but short in attack.

Man of the match: Giacomo Raspadori

Another key Southgate call - Saka at left wing-back - was also almost exposed in the first half, with the Arsenal man, more accustomed to playing right wing, caught out of position several times, leaving Maguire vulnerable.

A Reece James deflected drive and Kane blast over the bar was all the visitors had to show for their efforts in attack in the first half and while there was enthusiasm after the restart, with Raheem Sterling forcing Leonardo Bonucci into a yellow-card foul on the edge of the box before Kane was shutdown by the veteran defender, there was still no cut-through or creativity in the final third.

Rafael Toloi turning a Kane cross past his own post was one of the better moments England managed to carve out but at the other end Walker's generosity to Raspodori - who brought the ball down and finished well - left the visitors in trouble.

With Southgate throwing on Jack Grealish and switching formation, the game opened up but while Kane was twice denied by Donnarumma the better chances came Italy's way, with Manolo Gabbiadini denied by Pope and Di Lorenzo denied by the upright.

As Southgate went to applaud the travelling England support there were audible boos - and another bad result and performance against Germany at Wembley on Monday would now be extremely damaging.

Southgate: There were lots of positive signs 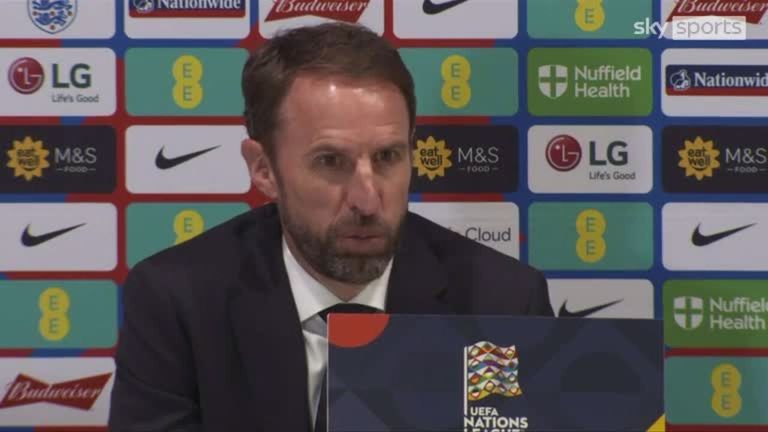 England manager Gareth Southgate reacts to England being relegated from their top tier group in the Nations League, as their poor form continues with no win from five games in a row.

England boss Gareth Southgate: "It's difficult for me to be too critical of the performance. We had more possession, more shots, more shots on target. For large parts of the game we played very well. We didn't deal with the decisive moment defensively and we had moments where we could have been more decisive in their final third.

"Our quality wasn't quite right. It's a spell where ultimately results are going to be everything everyone reacts to but I thought there were lots of positive signs for us as a team. There were lots of good individual performances. The performance was a step in the right direction. But I completely understand that isn't going to be the reaction externally.

"We're not in an ideal situation in terms of numbers of players playing at the highest level but we've got to keep working at it and keep on track. There will be a huge amount of noise but that has been created from the summer and I totally understand that. The players know this was a game they could have won. If they take their chances and defend the goal better then we do win. It's fine margins against the biggest football nations and the fine margins are decisive.

"We are where we are in terms of the timing so we need to do the best we can in terms of keeping the guys on track. The reaction to what I say now will be guided by the result completely but we weren't far off in terms of performance. I have got to keep the players believing in what they are doing and keep them from being distracted by going into areas that aren't correct. That's the task I've got."

"Gareth Southgate described it as a step in the right direction - but England's performance against Italy looked more like a team that was lost. The result was a bad one, given Italy's recent struggles, and the manner of it has rung alarm bells among the fanbase.

"Two months out from Qatar, England can't buy a goal from open play, with the attack disjointed from the rest of the team. It's 22 years since they went three games without a goal at all, while stat comparisons with San Marino's scoring record in this Nations League underline just how bad it has got.

"That disconnection between Kane and his colleagues comes from Southgate opting to pack the defence. And with a back three behind two protecting in midfield, England looked relatively secure - if excessively cautious - until an individual mistake from Walker gave Raspadori room to score.

"However, the change to four at the back to offer more support up top then left England exposed at the other end. One solution seems to cause a problem elsewhere. They are issues you'd expect to have been resolved this deep into a manager's tenure.

"But unless Southgate can figure out how to get that balance right in the next couple of months, England will have real problems reversing this slump in Qatar."

England host Germany at Wembley on Monday at 7.45pm in their final Nations League game of their Group A3 campaign. It will also be the Three Lions' last competitive match before this winter's World Cup.