Report as Liverpool claim opening-night win in Group B; Tomori own goal puts Liverpool ahead before Mo Salah misses pen, but Rebic and Diaz give Milan shock lead at half-time; Salah and Henderson on target in second half to secure win for Liverpool

Jordan Henderson's superb finish gave Liverpool a 3-2 victory from behind over AC Milan in a thrilling opening-night clash in Champions League Group B.

Liverpool burst out of the traps and were 1-0 up early on through Fikayo Tomori's own goal from a Trent Alexander-Arnold cross (9), before Mo Salah saw his penalty saved by Mike Maignan (14), his first miss in 17 for Liverpool.

Salah made up for his penalty miss with a leveller just after the break (48), poking home Divock Origi's clever chip over the defence, and Jordan Henderson completed Liverpool's own comeback with an exquisite half-volley from 20 yards (69) from a cleared corner.

The result, paired with Atletico's 0-0 draw against Porto, puts Liverpool on the front foot in a tricky Group B, with Porto next up away from home on September 28. Jurgen Klopp's side are unbeaten in all competitions this season, and unbeaten in 14 overall.

Man of the match: Jordan Henderson

How Liverpool came out on top in five-goal classic

It was Anfield's first European night with supporters in attendance since the start of the pandemic, while seven-time winners AC Milan were back in Champions League action for the first time in seven years.

But it was a rude awakening initially for the Italians as Liverpool camped in Milan's defensive third from the first minute; Andrew Robertson and Diogo Jota missed early half-chances, and they took the lead through brilliant combination play between Alexander-Arnold and Salah.

Having played a one-two with Salah around an unsuspecting Rafael Leao, Alexander-Arnold skipped his way into the box on the right, looked to centre, and saw the ball deflect off Tomori and over goalkeeper Maignan for an own goal.

It should have been 2-0 moments later as Liverpool were awarded a penalty for a handball from Ismael Bennacer as he blocked Robertson's cross, but Salah's blasted penalty was saved by Maignan down the middle, before the Milan stopper reacted well to tip away Jota's headed rebound at close range.

Liverpool made four changes to the side that beat Liverpool as Virgil van Dijk was benched alongside Thiago and Sadio Mane, while Harvey Elliott was out injured.

AC Milan made three changes to the side that beat Lazio on Sunday as Simon Kjaer, Ismael Bennacer and Alexis Saelemakers came in for Alessio Romagnoli, Sandro Tonali and Alessandro Florenzi. Zlatan Ibrahimovic was out injured, while Olivier Giroud was on the bench.

Milan then settled slightly as Liverpool moved to a lower gear, but the chances continued to flow as Joel Matip headed a good opportunity at Maignan, and Salah's snap-shot from the edge of the box was tipped away brilliantly by the busy goalkeeper.

But such is the nature of Champions League football, one moment of quality turned the game on its head. Milan equalised from nowhere as Leao's pass split Matip and Joe Gomez to find Rebic, who wrapped his foot around the ball to finish low past Alisson.

And just 110 seconds later it was 2-1 as Rebic was released again by Leao on the left of the box. This time he squared for Theo Hernandez, whose shot was blocked on the line by Robertson, only for Diaz to tap home again with the Liverpool defender failing to get back to his feet in time.

Liverpool's fans and players went into half-time wondering how their dominance was not reflected in the scoreline.

But they were let off the hook seconds after the restart as Simon Kjaer converted at the back post from a Jordan Henderson error at a corner, only for the offside flag to correctly go up, and it was soon 2-2.

Receiving the ball on the edge of the box from Salah, Origi scooped the ball over the Milan back line for the Egyptian, who composed himself before pushing the ball past Maignan, staying just onside.

AC Milan retreated again, and Liverpool huffed and puffed before getting their third midway through the second half through an unlikely source.

From a half-cleared corner, Henderson's first-time half-volley from the edge of the box was struck superbly, flying into the bottom left corner for only his second Liverpool goal since the end of the 2019/20 season. 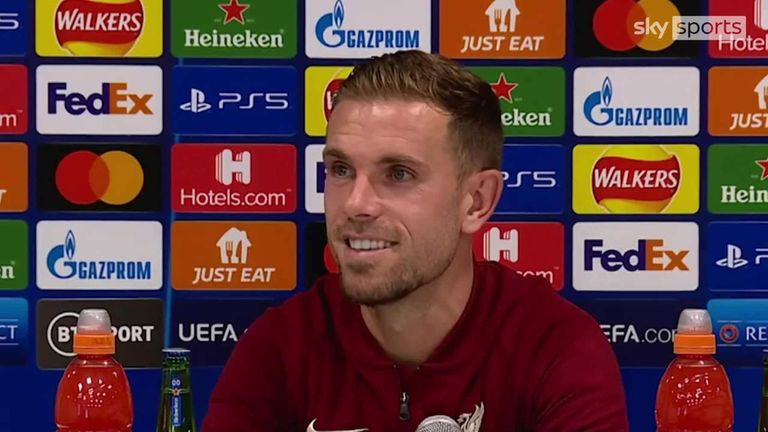 Jordan Henderson described Liverpool's 3-2 win against AC Milan as a rollercoaster after scoring the winner at Anfield.

The one-goal lead was still fragile as sub Olivier Giroud headed off target, while Alisson just cleared ahead of Milan's front line from a corner, but Liverpool held on.

This wasn't quite Istanbul in 2005, but the victory and comeback was a show of character from a Liverpool side reverting to type following an topsy-turvy 2020/21 season, and a classic European night will contribute heavily to the feeling of normality at Anfield.

"[Divock] played a beautiful game. People forget how good he is, it's difficult to get into this team.

Klopp added in his post-match press conference: "He's a great guy. He'll be seen as a legend when he leaves. He could have left in the summer but football is a crazy place and people forgot how good he is. We have to decide the positions. He did nothing wrong." Liverpool manager Jurgen Klopp says their 3-2 win against AC Milan was but was a good game to win with every point valuable in the Champions League group stages.

Liverpool now host Crystal Palace in the Premier League on Saturday at 3pm, while Milan are at Juventus on Sunday evening at 7.45pm in Serie A. Milan's next Champions League group game is at home to Atletico Madrid on September 28 at 8pm.