Report and free match highlights as Mykhailo Mudryk shines on his debut but neither Liverpool nor Chelsea are able to find the winner in a goalless game at Anfield; Kai Havertz had an early goal disallowed for offside 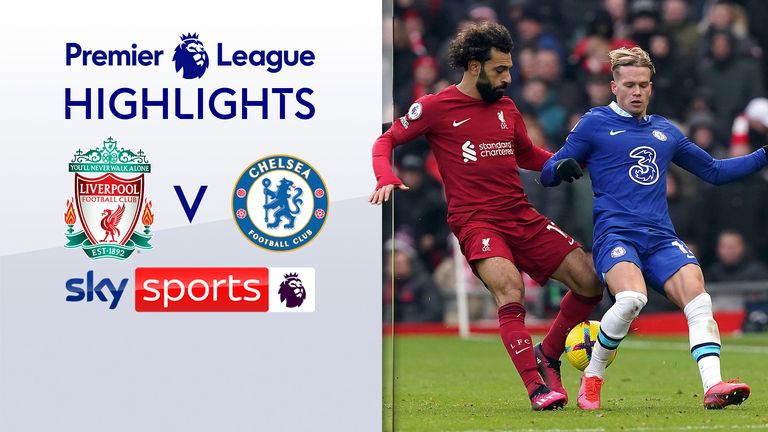 FREE TO WATCH: Highlights from the goalless draw between Liverpool and Chelsea in the Premier League.

Liverpool and Chelsea played out a goalless draw as the recent struggles of both teams were laid bare on a cold afternoon at Anfield.

Kai Havertz had an early goal disallowed for offside but the game failed to ignite thereafter. Mykhailo Mudryk did impress for Chelsea off the bench following his move from Shakhtar Donetsk and had a number of opportunities to mark the occasion with a goal.

But the two teams remain locked level on points in midtable. Jurgen Klopp's side have to settle for ending their two-game losing streak in the Premier League, while Graham Potter's side are now on a run of six matches away from home without a win in the competition.

Player of the match: Thiago Silva.

How the game unfolded at Anfield

It was almost a dramatic start when Havertz thought he had scored following a corner but the replays showed he was clearly offside when Thiago Silva struck the post with the initial attempt. The Brazilian's effort would have been allowed if he had found the net.

That disallowed goal proved a sign of things to come with Liverpool struggling to deal with the set-pieces. It was a feature of the game with Benoit Badiashile almost opening the scoring just after the half-hour mark only for Alisson to save from close range.

Teenager Stefan Bajcetic made his first Premier League start for Liverpool, but Trent Alexander-Arnold was named among the substitutes following minor muscle problem. Darwin Nunez returned from injury although was only fit enough to make the bench.

Chelsea made one change from their 1-0 win over Crystal Palace with Marc Cucurella coming in for Carney Chukwuemeka. Mykhailo Mudryk had to wait to make his full debut after joining in an £89m deal, the 22-year-old named on the bench.

Liverpool looked nervous and they were wasteful in attack too. Cody Gakpo, still searching for his first goal for the club, blazed over twice, while the usually reliable Mohamed Salah either miskicked wildly or curled the ball over tamely when in his favourite zone.

It was an error-strewn affair, a stray pass here, a ball miscontrolled there. It was surprising given the quality of the players but perhaps to be expected given the form of the two teams. Languishing in midtable, confidence is clearly lacking, everything looks a struggle.

Mudryk changed the mood somewhat, all flicks, tricks and purposeful passing. He skinned James Milner for pace, forcing Klopp to swiftly send for Trent Alexander-Arnold, but even Mudryk did not bring the breakthrough, wasting two good chances on the angle.

Potter will take the positives from that and hope the new signing can be a catalyst for further improvement. Klopp, in his 1000th game in management, is still searching for something that works. Neither side are showing the form needed to trouble the top four.

Player of the match: Thiago Silva

Competition was not exactly fierce for player of the match but Thiago Silva shaded it for doing more than anyone else to secure the clean sheet at Anfield. Playing alongside an inexperienced centre-back partner in Badiashile, Silva was as serene as ever.

"I am sure he benefitted from playing with Thiago Silva," said Potter of the new defender. "Everyone benefits." Chelsea are a team in transition and how long the 38-year-old Brazilian will be part of it remains to be seen, but they are not ready for life without him yet.

There was a moment in the second half when he was exposed one-on-one against Darwin Nunez. The home crowd were up but the old maestro saw out the danger. "He has got a footballing brain that is above everybody, pretty much," added Potter. That sums it up.

"We started well first half and second half," Klopp told BT Sport. "We had good spells but couldn't keep it up. We have to be ready for little steps and this is a little step. A clean sheet against Chelsea, we didn't create a lot of chances and they had some as well.

"We defended in the second half with passion and clear organisation, but we were too deep in these moments. In the end, I'm okay with 0-0 because you have to accept these steps. We can build on that. Both teams were very aggressive."

"I thought the performance was good," Potter told BT Sport. "Happy with the team, the energy, what we tried to do. At Anfield, it is always tough. It is a clean sheet and a point, we move forward.

"First half, we were decent, unlucky not to get the goal. It is what it is. They started the second half well, and we adjusted a couple of things and gained control, had a couple of chances. Overall, a positive day, apart from the fact we wanted three points."

The game in stats

Liverpool turn their attention to the FA Cup, where they visit Brighton on January 29, kick-off 1.30pm. Their next Premier League game is a trip to Wolves on February 4; kick-off 3pm.

Jurgen Klopp's side then have a very busy February which includes a Merseyside derby at home to Everton, live on Monday Night Football. Liverpool also travel to Newcastle and Crystal Palace in that month, either side of hosting Real Madrid in the Champions League last-16.

Chelsea have next weekend off as they were eliminated from the FA Cup in the third round at Man City. Their next game is a west London derby at home to Fulham, live on Friday Night Football on February 3.

The Blues have two London derbies to contend with in February, travelling to West Ham and Tottenham at the start and end of the month. Their other games in February see them host Southampton and travel to Borussia Dortmund in the Champions League last-16.