Liverpool 0-2 Everton: Richarlison and Gylfi Sigurdsson end 22 years of hurt for the Toffees at Anfield

Report and highlights as Carlo Ancelotti's men win for the first time at Anfield since 1999; Richarlison's early strike and Gylfi Sigurdsson's penalty condemned Liverpool to a fourth straight home defeat 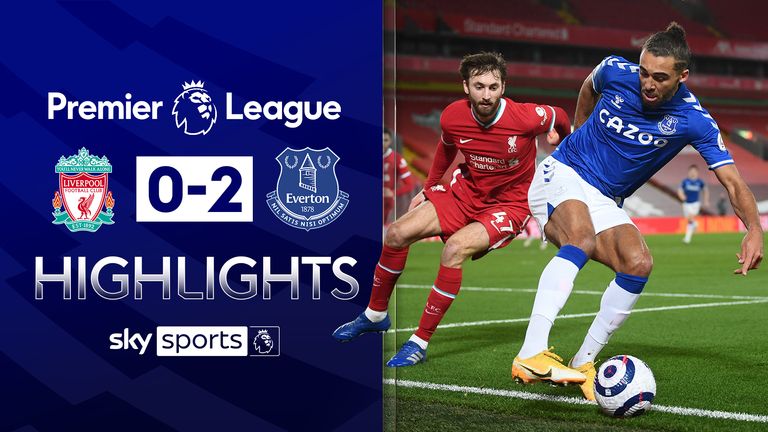 FREE TO WATCH: Highlights from Everton's win over Liverpool in the Premier League.

Everton ended their 24-game winless run at Anfield with a deserved 2-0 win over Liverpool as Jurgen Klopp's men slipped to a fourth straight home defeat.

Carlo Ancelotti's men came into the game having won just one of the last 28 Premier League meetings with their great rivals but made the perfect start when Richarlison raced through (3) to finish past Alisson.

Liverpool lacked urgency in their play and their challenge became harder when Jordan Henderson limped off with a groin injury, further worsening their problems at centre-half.

Everton, determined in the tackle and brave with the ball, sensed weakness when sending on Dominic Calvert-Lewin from the bench to join Richarlison in attack and it was a gamble that paid off when the England striker won a controversial penalty off Trent Alexander-Arnold.

Sigurdsson rolled home from the spot (83) to seal Everton's first win against Liverpool since 2010 and their first at Anfield since 1999.

Liverpool equal a club record of four successive home league defeats set in in 1923 and Everton are now level on points with the Reds in the table having played a game fewer.

Man of the match: Tom Davies

📊 Liverpool have now lost as many PL games (4) at Anfield in the last 31 days as in Jurgen Klopp's first 100 home matches in charge pic.twitter.com/mnXZVQZg95

Everton had taken 23 points from their 11 Premier League away games this season and started in positive fashion, winning a corner inside 30 seconds after playing direct into the windy conditions at Anfield.

Ancelotti's side kept up the intensity in midfield and after winning a second ball, it dropped to James Rodriguez who showed his quality to pick out Richarlison in behind. The Brazilian, who was playing through the middle with Calvert-Lewin not fit to play 90 minutes, raced through and took the chance like an experienced centre-forward, finding the bottom corner with a crisp finish.

Everton were pouncing on the vulnerability of Ozan Kabak in the Liverpool ranks with the defender clattering Rodriguez after a mistimed challenge and he finished the half with a booking - for the third successive match.

Jordan Pickford was called into action when palming away a Sadio Mane cross before Henderson's swerving volley around the post before the Liverpool captain's exit with a groin injury.

Despite enjoying most of the ball, Liverpool rarely troubled the well organised Everton defence, protected excellently by Tom Davies.

Alisson then had to produce a good save to deny a diving Seamus Coleman header from Lucas Digne's cross.

Klopp was on the pitch with his players before the start of the second half as he looked for a response, and they responded in the early stages.

Pickford was in action catching a Mane header early in the second half, with Mason Holgate also cutting out a dangerous Trent Alexander-Arnold cross and Michael Keane producing a brilliant goal-saving tackle on Mane, who had moved more centrally.

Mohamed Salah then got a sight of goal after some brilliant play by Alexander-Arnold but Pickford was equal to his effort, diving at his feet to block away.

With Everton struggling to get out of their half Calvert-Lewin was called for and his impact flipped the game in the visitors' favour.

His direct run was adjudged to have been stopped illegally inside the box by Alexander-Arnold after Alisson had saved his original effort.

Referee Chris Kavanagh was asked by VAR to look at the pitchside monitor but the official took barely a few seconds to decide he had made the right decision and another substitute Sigurdsson fired home from 12 yards to complete the win.

'A shadow of the champions'

"That was a shadow of the Liverpool team. As a Liverpool supporter, l am deeply disappointed by my team. It didn't look like they had any aggression, or fight or energy about them.

Liverpool now have eight days off before facing Sheffield United at Bramall Lane next Sunday, live on Sky Sports, while Everton are in action on the Monday Night Football at Goodison Park vs Southampton.