Liverpool and Manchester United could only play out a goalless draw at Anfield as a game billed as a title race marker failed to find a finish.

Five days after knocking the champions off their Premier League perch with victory at Burnley, Ole Gunnar Solskjaer's side were hoping to further assert heavyweight title credentials at the home of their fiercest foes.

In this truer test, the hosts' long unbeaten league run on Merseyside never looked under real threat until late on, when Alisson made two vital saves to deny Bruno Fernandes and Paul Pogba from close range.

Liverpool, in Jurgen Klopp's 200th Premier League game, found the breakthrough elusive themselves as they dominated the ball for long spells but struggled for attacking fluidity, failing to score for a third Premier League game in a row.

Manchester United stay three points clear of Liverpool, whom they meet again in the FA Cup on next Sunday, at the top of the table, with Leicester - a point above the Reds - between them.

But this was a result to offer real encouragement to Manchester City - who will close the gap at the top to just two points if they beat Crystal Palace later on Sunday - as well as to Tottenham and Brendan Rodgers' team.

Hotly-anticipated showdown - but no goals

Ahead of a tantalising contest between two northern powerhouses unusually locked in a title race, Anfield's anthem echoed poignantly around an empty stadium, its late hitmaker Gerry Marsden remembered before kick-off.

Gary Neville had expected Liverpool to "come out like animals" after the sting of defeat to Southampton but their play was quietly controlled in a cagey start, Andy Robertson on the end of two patient moves but twice off target.

United had offered an early glimpse of their counter-attacking threat down the left but the game's midfield pattern soon became clear, Fred and Scott McTominay prised apart as Thiago probed.

Roberto Firmino cut inside ominously, only to be thwarted by Victor Lindelof, while Harry Maguire put his body in the way of shots from Xherdan Shaqiri and Gini Wijnaldum with Liverpool further encouraged and well in command yet still to have a shot on target as the half-hour mark came.

Fernandes pulled his shirt over his head in frustration as a free-kick curled just wide of Alisson's post and though Firmino spurned another opportunity after Mohamed Salah broke clear, United sensed a foothold as more Liverpool attacks came and went without reward.

Jamie Carragher called for "more quality" from Liverpool's frontline but a laboured feel remained as players for so long so potent took an extra touch, an unnecessary pass. One delivery of real menace from Robertson just before the hour was cut out by Maguire and then Salah dithered in the box before firing wide.

A fine Fabinho block had denied Fernandes not long before but Solskjaer was emboldened enough by the scoreline to send on Edinson Cavani, a smash-and-grab scent in the air. 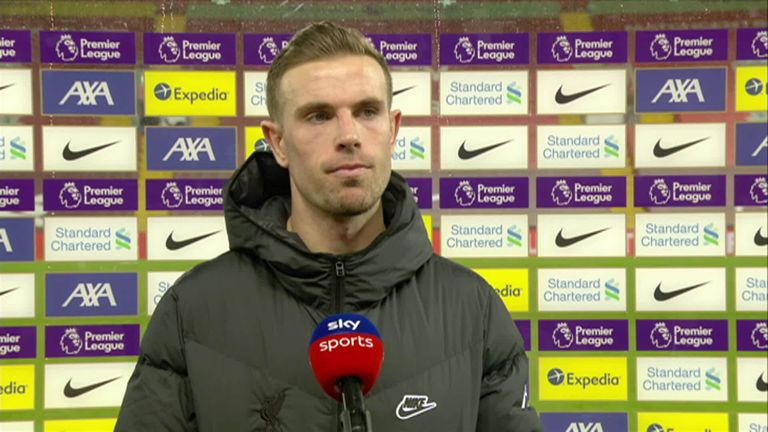 After their 0-0 draw with Manchester United, Liverpool captain Jordan Henderson says they are missing a bit of luck in front of goal.

Thiago forced a stop from David de Gea late on as Liverpool's intent only flickered but Alisson's late work was more significant, the Brazilian denying Fernandes and then Paul Pogba's half-volley from close range as the Frenchman punched the turf.

It was a strong finish from Solskjaer's side in a game that will have disappointed the protagonists but cheered their rivals as the title race picture continues to look a compelling one.

Liverpool boss Jurgen Klopp: "If we won 1-0 I'd think it was completely fine. You can't deny Manchester United chances for 90 minutes. You never could. They're in a good moment. With all the things said before the game - they're flying and we're struggling - my boys did a good game. 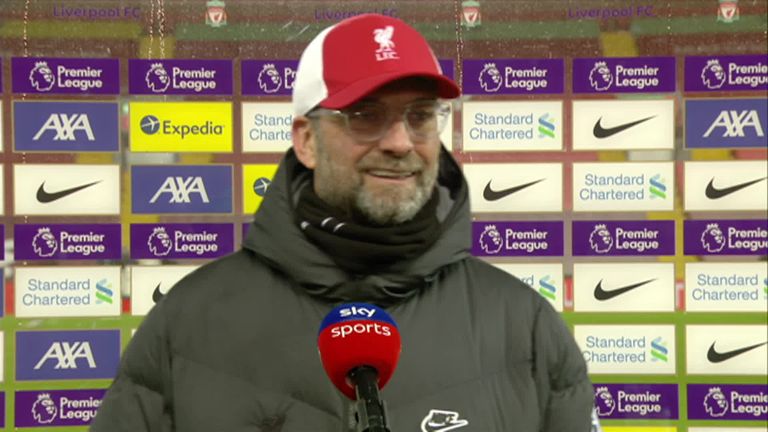 Jurgen Klopp was pleased with Liverpool's performance against Manchester Utd but admitted scoring goals is a challenge for his side at the moment.

"First half the counter-press was great, passing was good. But we didn't score. That's the most important thing in football. The second half was a bit more open. They had two big chances - Alisson made two good saves.

"There is no easy explanation [for their recent lack of goals]. You always miss chances. You have to keep going and try to ignore the talk around it. Everyone wants to see goals. You cannot force it. These moments happen. I saw a lot of really good individual performances and the team performance was good. Not the result we wanted, but the result we got."

Man Utd boss Ole Gunnar Solskjaer: "I've got to be honest and say I'm disappointed at the moment. With the injuries they have had lately, you want to come here and get a result. We didn't, but a point might be OK if we win the next one 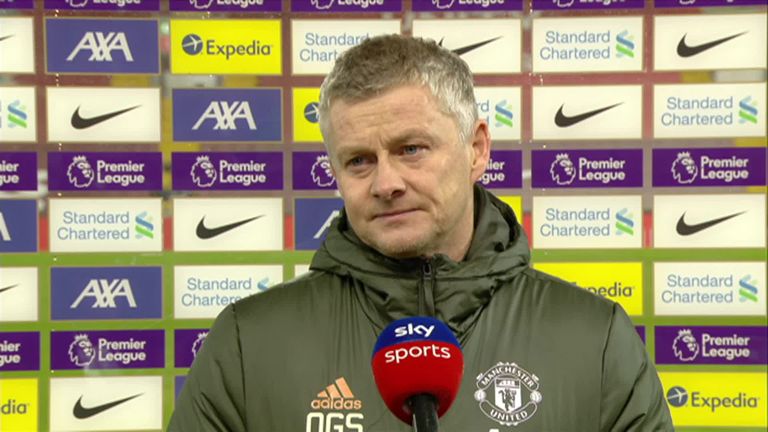 Manchester Utd manager Ole Gunnar Solskjaer felt that his side did not deserve to claim all the three points against Liverpool and believes they could have played a lot better.

"We didn't deserve the three points because we didn't play well enough. We didn't impose ourselves on the game, especially first half. We grew in the game and thought it was there to win in the second half and created two massive chances. 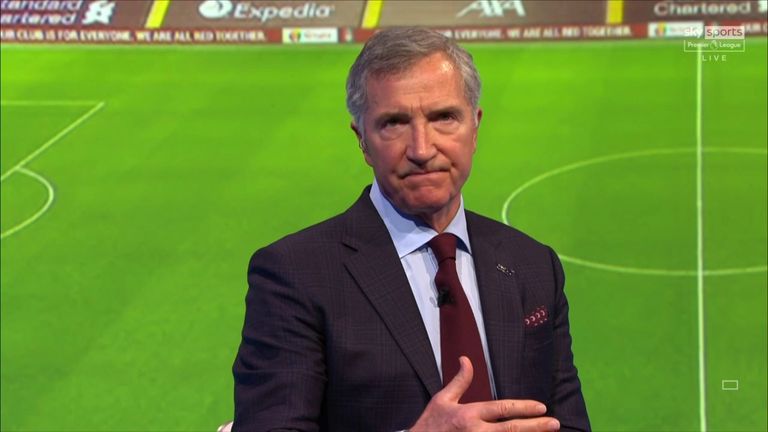 Graeme Souness feels Liverpool front three were not threatening enough against Manchester Utd and will need to improve in the coming weeks.

"Liverpool weren't at their best.

"We could talk all night about what Liverpool are not at this moment in time, but where they are is in the top four, not at their best, and that will be a source of encouragement for a lot of people."

'Can Man Utd win it? This is progress at least...' 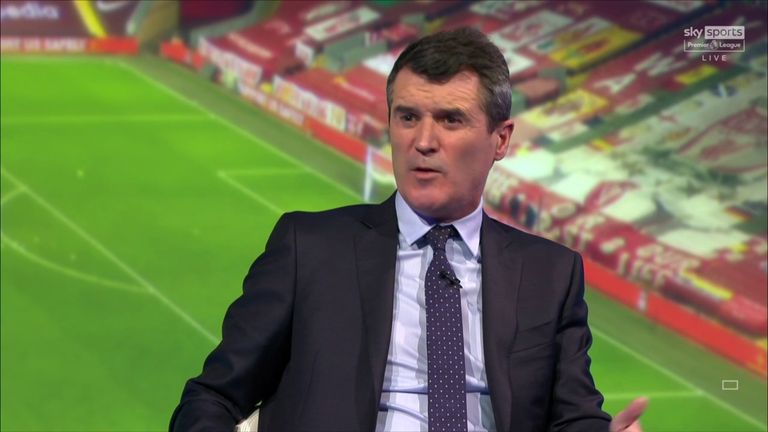 Roy Keane felt that Ole Gunnar Solskjaer would be happy with coming away from Anfield with a point after a positive performance.

"It was a big test for United. They were sloppy for a while but overall, the draw, the clean sheet, the better chances - I think Ole should be ok with this.

"For us to discuss Man Utd being top of the table at this stage is progress. The hard part is winning these tight games but overall I would be pleased with their performance. Have they got enough to win it? I don't know, I'm changing my mind every few weeks!

"Rashford didn't turn up, Fernandes didn't play well, but they still created the best two chances in the game. If Pogba wants to be the main man, he has to take that chance." 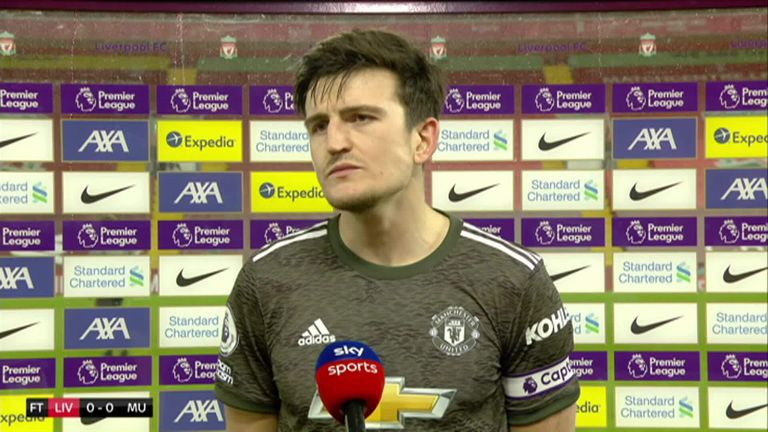 Harry Maguire says Manchester United had the best chances to win the match against Liverpool and that they were braver than when they played at Anfield last season.

Liverpool host Burnley in an 8pm kick-off on Thursday evening, live on Sky Sports Premier League, before going to Manchester United in the FA Cup at 5pm on Sunday.

Before that FA Cup reunion with the Reds, Manchester United travel to Fulham in the Premier League at 8.15pm on Wednesday.