Liverpool vs Shrewsbury Town. The FA Cup Fourth Round.

The youngest team in Liverpool's history justified the faith Jurgen Klopp placed in them when he absented himself and his first team from their FA Cup fourth-round replay by beating Shrewsbury 1-0 at Anfield.

Former Manchester United academy player Ro-Shaun Williams' 75th-minute own goal proved to be the difference, moments after the League One visitors saw David Edwards' header ruled out by VAR.

Klopp had been accused of disrespecting the cup when he chose to honour the mid-season Premier League break by sending all his stars on holiday rather than play in this game.

But their replacements did themselves, Klopp and the club proud with a performance full of confidence and commitment which belied their tender years.

With an average age of 19 years and 102 days, three debutants, 36 senior appearances between them and squad numbers ranging from 46 to 93 this was a very inexperienced team at any level never mind a somewhat controversial cup tie in front of almost 53,000 at Anfield.

There was at least some first-team representation at the match with James Milner, who has remained behind to continue his rehabilitation work at Melwood rather than going away, sat in the first row behind the dugout.

Kick-off was delayed by 15 minutes due to an accident closing the M62 motorway which immediately prompted numerous jokes on social media about the Liverpool youngsters being out late on a school night.

Coincidentally a number of these players were scheduled for an 'education' session on Wednesday morning but for this night it was Shrewsbury who got a schooling.

Curtis Jones became Liverpool's youngest captain at 19 years and five days after being handed the armband to lead a youthful team.

The side named by U23 manager Neil Critchley contained four players - Jones, Harvey Elliott, Neco Williams and Pedro Chirivella - from the original tie in Shropshire.

League One Shrewsbury named 10 of the side which started the original tie with Liverpool.

When striker Liam Millar, a Canada international with eight caps, robbed Ethan Ebanks-Landell just outside his own penalty area in the first couple of minutes, the tone was set.

The youngsters buzzed about the Anfield pitch not overawed by, for most, the biggest occasion of their short careers and dominated possession - as high as 78 per cent in the first half.

They were not lacking in confidence either with first-half individual highlights of Curtis Jones, who became Liverpool's youngest captain at the age of 19 years and five days, including a drag-back nutmeg on Ro-Shaun Williams and a rabona cross.

But they lacked a cutting edge, right-back Neco Williams going closest with an angled drive wide of the far post, and with the visitors - starting 10 players from the original tie - showing little intent to go forward, the half ended goalless.

Attacking the Kop in the second half the impressive Neco Williams should probably have scored soon after the break but was denied by goalkeeper Max O'Leary's outstretched foot, coming just seconds after Callum Lang's rare foray into the Liverpool penalty area ended with him going down after a tangle with Ki-Jana Hoever.

If playing at Anfield was a new experience for Liverpool's side, VAR was a novelty for Shrewsbury and it came to the hosts' rescue on the hour when Shaun Whalley nodded in Edwards' rebounded shot only for the referral to rule it out for offside.

Harvey Elliott and Jones both fluffed a close-range range attempts as the home side began to add some threat to their dominance but when the goal eventually arrived it came with some considerable assistance.

Neco Williams' long ball forward was aimed at Elliott but namesake Ro-Shaun intervened, heading back over his own goalkeeper from the edge of his own penalty area.

It was then credit to Liverpool's youngsters that they saw out the remainder of the game with few alarms and were still attacking in added time.

Chelsea at Stamford Bridge await in the last 16, when Klopp and some of his first-team stars will be back.

Liverpool U23s boss Neil Critchley: "The maturity that those young boys showed to play that game was remarkable. They actually calmed me on the side and over 90 minutes, I think we had the better chances, and were just about the deserved winners on the night.

"The boss was in touch this afternoon with some words of advice and some encouragement, which was really nice of him.

"I've not checked my phone, but we had a message from the staff at the end there saying he's absolutely delighted with the performance and he's buzzing. We've given him a game against Chelsea to look forward to." 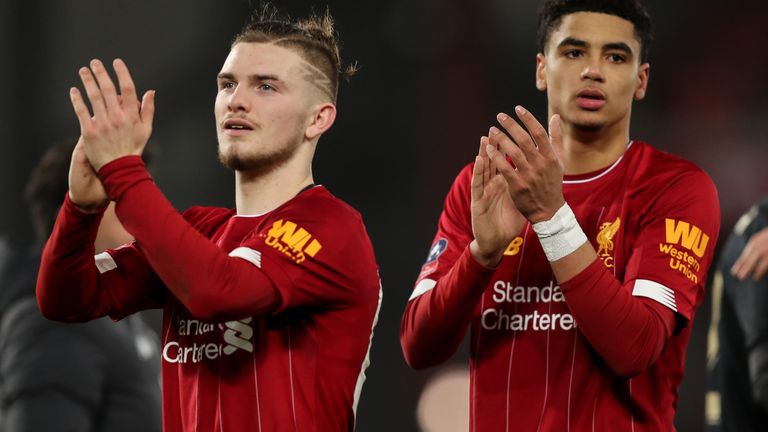 Shrewsbury boss Sam Ricketts: "I feel a little bit flat to be honest with you as we struggled to get going tonight. We've played so many games. That was our 39th of the season, and we looked like a side who just couldn't quite get going.

"Liverpool moved the ball really well. They're bright, lively and played well. We just weren't at it. You can't play at 95 per cent.

"We had a spell after half-time where we had a goal disallowed, asked a few questions, but we were too passive."

Analysis: 'Klopp has got away with it a bit'

"I don't think he needed to vindicate his reasons for not fielding the first team with everything that's going on. Considering the opposition, he clearly felt the kids could do a job, and they've done the job.

"In terms of him not being there, I suppose he's got away with that a little bit. If they'd lost the game, it would've been highlighted a little more.

"He would've motivated the younger lads naturally. The intensity always goes up, but those questions about his absence have now been nullified."

Liverpool now have their mid-season winter break, returning to action in the Premier League against Norwich at Carrow Road on Saturday February 15; live on Sky Sports. Kick-off is at 5.30pm.