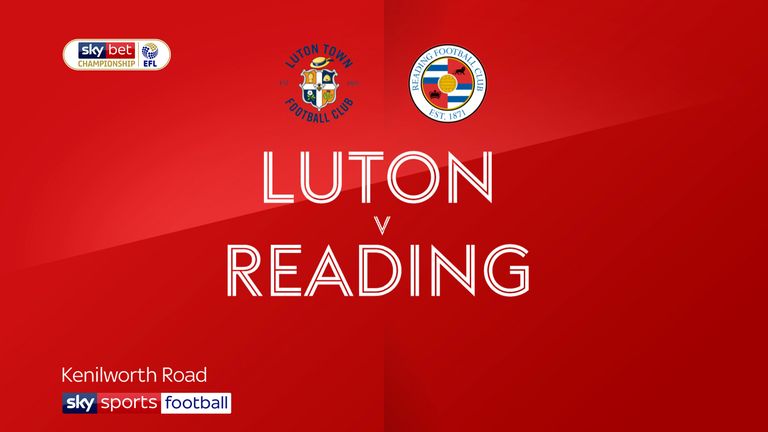 The striker had his treble after just 35 minutes as the Royals ran riot to record their first victory since the restart, with Luton, the league's bottom side, collapsing in the face of the onslaught.

George Puscas was also on target for the ruthless visitors.

Reading might have gone ahead early on, Meite seeing his close-range attempt brilliantly cleared off the line by Dan Potts after goalkeeper Simon Sluga could only parry a cross-shot.

James Collins then hit the bar for Luton, unable to keep his header from Harry Cornick's cross down, while Matty Pearson had appeals for a penalty rejected as the visitors soon assumed complete control.

They went in front after 17 minutes when Meite was put in the clear by Puscas and kept his nerve to slide his shot underneath Sluga.

Luton's defence, which had been so watertight as they held leaders Leeds in midweek, crumbled as Sluga fumbled Gabriel Osho's cross, Pearson could not clear Puscas's follow-up and Meite was able to blast home his second.

Tom McIntyre almost had a third, his shot deflecting straight into Sluga's grasp, but Meite then completed his hat-trick, arrowing a shot into the corner after Ovie Ejaria's clever pass had put him clean through once more.

Meite attempted to notch a fourth from outside the area, but got underneath his fierce effort.

John Swift's shot drew a save from Sluga at his near post, the Croatian parrying behind.

Reading did make it 4-0 after 57 minutes when a long ball was met by Michael Morrison, and his towering header back across goal found Puscas to score.

Meite then grabbed his fourth, Luton's defence sliced open once more and the Ivory Coast international making no mistake when faced with Sluga.

The Hatters had a sniff of a consolation, Collins unable to convert Pelly-Ruddock Mpanzu's cross with 25 minutes left, while they had a great chance in the closing stages, defender Dan Potts' low shot repelled by keeper Rafael'slegs after a good move.

But centre-half McIntyre almost got Reading's sixth in the 89th minute, reaching a deep free-kick at the back post, only for Sluga to block and then gather the rebound.

Luton's Nathan Jones: "We've had two massive away games where we've had to put in real shifts - at Swansea to win the game, then Leeds, and that has taken its toll. We were flat today and defensively they probably had six chances and scored five.

"We were just really, really flat. We lacked energy, we lacked real drive in our performance and I can only put that down to the effort put in. It's very difficult for me to really have a go at them, I'm bitterly disappointed. These were opportunities these home games, but to be fair they've given me everything and it showed today that they probably lacked that little bit of energy from the exertion they've had over the last week."

Reading's Mark Bowen: "[Meite] actually came to see me yesterday (Friday) and was trying to put a case forward as he wanted to play as a number nine. I was telling him, 'sometimes you play from a wider area, yes it's harder work as you've got to track full-backs, but you can find more space coming in that channel between a full-back and a centre-back'.

"I walked in the dressing room and he looked at me with a wry smile on his face, so I think maybe for today I've won that argument. Five-nil is fantastic, but for me the most pleasing thing at five-nil was that we switched off, they went clean through and Rafa (Cabral) came out to keep a clean sheet with a point-blank save, which was huge."