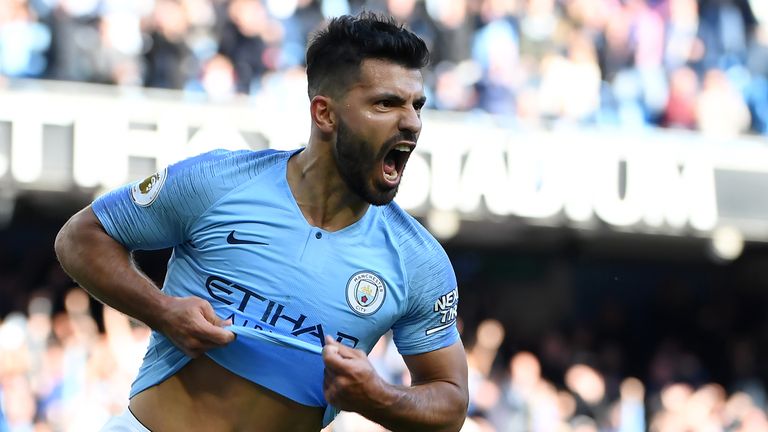 Raheem Sterling scored one and made another as Manchester City eased past Brighton 2-0 at the Etihad in the Premier League on Saturday.

The win puts champions City back at the top of the Premier League on goal difference ahead of Liverpool, who drew 1-1 at Chelsea in the later Saturday kick off.

Sterling tapped home his fourth of the season at the far post (29) from Leroy Sane's cross, and Sergio Aguero added a second (65) from Sterling's unselfish assist just as Pep Guardiola was due to sub the Argentine off.

The result also means City are still unbeaten in the Premier League this season, while Brighton are now without a win in six in all competitions and sit 14th.

As expected, City dominated the ball in the first half, and their first clear chance brought the opener. After City won the ball on halfway, Aguero released Sane on the left, and his fine ball across the face of goal was tapped home at the far post by Sterling.

Mat Ryan was then tested twice in quick succession, first from Sterling's shot on the right of the box from an angle, and then again from Fernandinho's fierce long-range strike.

City should have extended their lead just after the break as Aguero saw a shot blocked brilliantly by Duffy, before David Silva's strike on the rebound from 15 yards was tipped away by Ryan again.

City made two changes from the side that beat Cardiff 5-0 last weekend, with Zinchenko and David Silva in for Delph and Gundogan.

Brighton also made two changes; Murray and the injured Stephens came out, replaced by Kayal and Locadia.

With Gabriel Jesus on the touchline waiting to replace him, Aguero started and finished a fine move for City's second. Picking the ball up deep, he skipped past three challenges, fed the unselfish Sterling, and received the ball back 12 yards out to slot home. That was his last action, as Guardiola stuck to his original plan.

Brighton offered very little in the final third, but did have a strong late appeal for a penalty waved away after Fernandinho looked to have handled from a corner.

Charlie Nicholas: "Very routine. The first goal calmed City down. They were in control but took too many touches - it was too slow at times. The service was slow to Aguero, and Guardiola must be getting frustrated with why the team is taking too many touches, when they could release it quicker.

"Boredom can creep in [for City fans], people can take so much talent for granted and get used to it. But also a lot of teams just come and defend too, this was predictable, and perhaps [City fans] don't like the predictability of what happens here. When you've got players on song here, it's worth paying to see them. Today it was just a little bit slow, but about getting the three points."

Pep Guardiola: "It is important to be solid in our games. We have the same points as last season, but the contenders are better, in terms of results. That is normal. When we achieve up one level, everybody does everything to catch up. That is normal. 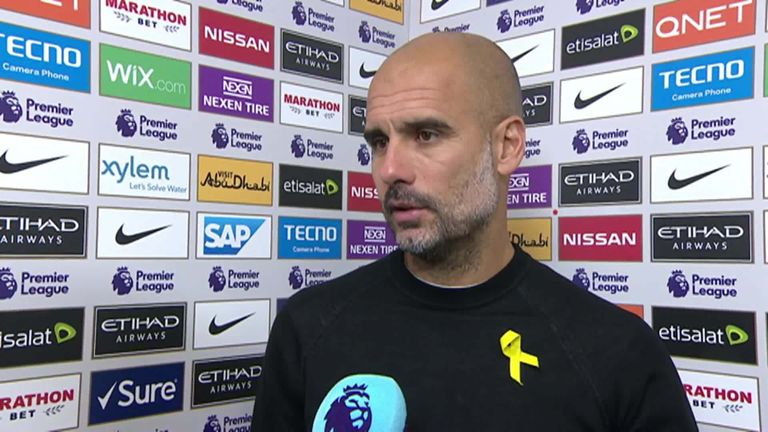 Guardiola says he was proud of Manchester City's 'patient' performance

"Arsenal is coming back, Tottenham with wins in a row, Chelsea, Liverpool, so it is important to be focused on what we have to do."

Chris Hughton: "What we have to be is realistic, and certainly our supporters are. We've played seven games, four against the top six, two other games away from home, with one at Watford, who have started so well. When we are evaluating where we are at the moment, we have to take that into context." 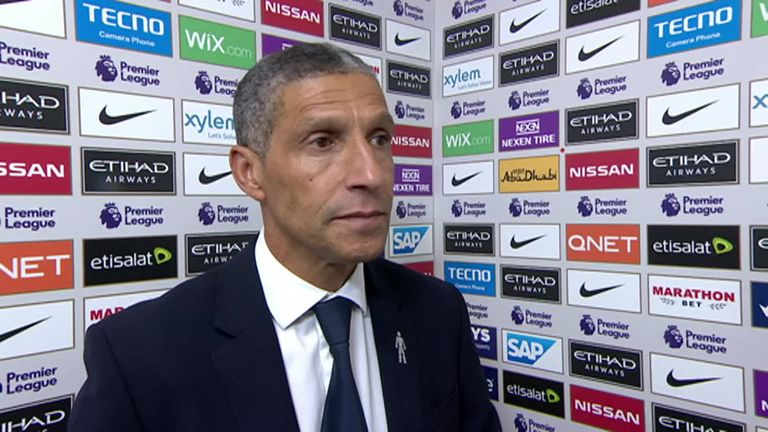 Judging by the award of a penalty for France in the World Cup final against Croatia, Brighton would have almost certainly been given a spot kick late on for Fernandinho's handball.

The Brazilian handled inside the box from Kayal's corner, with the ball travelling a fair distance before reaching him. Referee Lee Mason thought otherwise.

Aside from his goal and assist, Sterling was a menace for Brighton's defence all over the pitch.

He made four key passes, a joint team-high, completed 98.6 per cent of his passes, another team-high for an outfield starter, and got involved in more duels (15) than anyone.

This was vintage Sterling, and gave City energy in what was at times a pedestrian encounter.