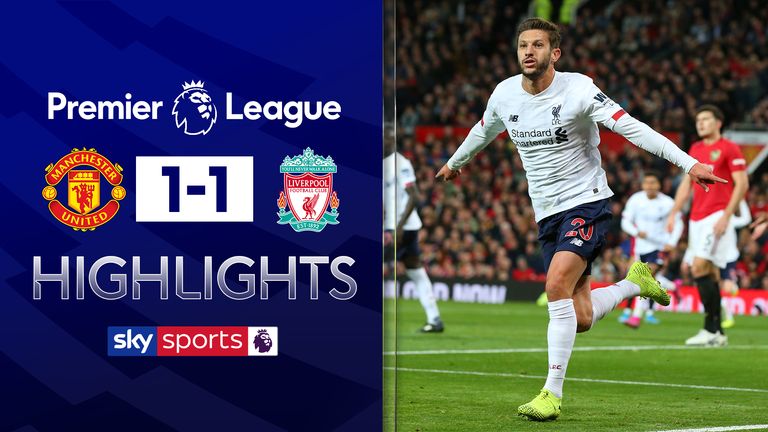 Adam Lallana's late equaliser saved a point for an under-par Liverpool as they drew 1-1 at Manchester United on Super Sunday in a game littered with more VAR drama.

After a frantic opening lacking in clear-cut chances, the game exploded late in the first half with two crucial VAR calls. First, Marcus Rashford gave United the lead from close range (36) as Liverpool's cries for a foul on Divock Origi in the build-up were denied by VAR.

Then, as Sadio Mane looked to have equalised (44), VAR correctly ruled the strike out for a handball. Both decisions prompted wild celebrations from the home crowd, but Liverpool, who were looking for a record-equalling 18 straight Premier League wins, levelled late on through sub Lallana's back-post tap in (85).

The result moves United into 13th, seven points off the top four, while Liverpool see their lead at the top cut to six points following Manchester City's 2-0 win at Crystal Palace on Sunday.

How under-par Liverpool escaped with point

Marcos Rojo was thrown into the occasion after a late injury for Axel Tuanzebe, but United started with more energy, resisting the temptation to sit in.

There was a lack of early chances as United got into good positions but, symptomatic of a team lacking confidence, simply did not know what to do with it. Liverpool's best chance came down the right flank as Mane squared for Roberto Firmino, whose low, sliding effort was saved well by David de Gea.

After a Saturday littered in VAR drama, it came again on the biggest stage on Super Sunday. United took the lead through Rashford, tapping home at close range after Daniel James' superb centre from the right, but Jurgen Klopp and Liverpool felt Origi was clipped by Victor Lindelof in the build-up.

"There's definitely contact with Origi and it's a foul," said Graeme Souness in the Super Sunday studio, but VAR David Coote deemed the tackle fair, and Stockley Park ruled to frustrate Liverpool again moments later in a sequence of events which Klopp later said showed "all the problems of VAR."

Mane slipped the ball past De Gea from eight yards after outmuscling Lindelof in the box, but replays, prompted by VAR, showed the ball had hit his arm as he controlled. As the half-time whistle went, United players made a point of sprinting inside, while Liverpool trudged off. It summed the first half up.

United began to sit in after the break as Klopp soon moved to replace Origi with Alex Oxlade-Chamberlain, though the hosts did break briefly through Rashford, who sent a low shot from 20 yards just wide.

David de Gea shook off a hamstring injury and started in the Manchester United goal. Aaron Wan-Bissaka replaced Diogo Dalot at right-back while Juan Mata was replaced by Victor Lindelof. Axel Tuanzebe was injured in the warm-up, meaning Marcos Rojo filled in.

Mohamed Salah failed to shake off an ankle knock and was replaced by Divock Origi up front as part of Liverpool's three-pronged attack. Joel Matip returned in defence in place of Dejan Lovren and Alisson made his first appearance since sustaining a calf injury in the Premier League opener against Norwich, replacing Adrian.

Klopp was visibly furious on the touchline with some of Liverpool's passing, while the sight of De Gea rising to collect a loose ball into the United box became a familiar one. But with five minutes remaining, Liverpool struck to uphold their unbeaten start.

Andrew Robertson's left-flank cross somehow found its way through a crowd of players to find Lallana lurking, and he tapped home.

Leading courtesy of their 1,999th Premier League goal, it felt like 1999 inside Old Trafford for 85 minutes, and an under-par Liverpool will feel relieved to escape with a point.

Analysis: Should Rashford's goal have stood?

'It is VAR at its best. That would be given before and now it's handball - it shouldn't be a goal. We can have talking points on VAR and disagree with certain things, especially on that first goal, but that was the reason VAR has been brought in.'

Man Utd boss Ole Gunnar Solskjaer: "[We got] a great response from the boys and we know we have a team that will work for each other with a great attitude and atmosphere in there.

"Maybe this will turn the season because they're disappointed in the dressing room because they feel we should have won and that's a good sign for a manager to see. Our fans, they showed again that they can see what's happening and we will get there." 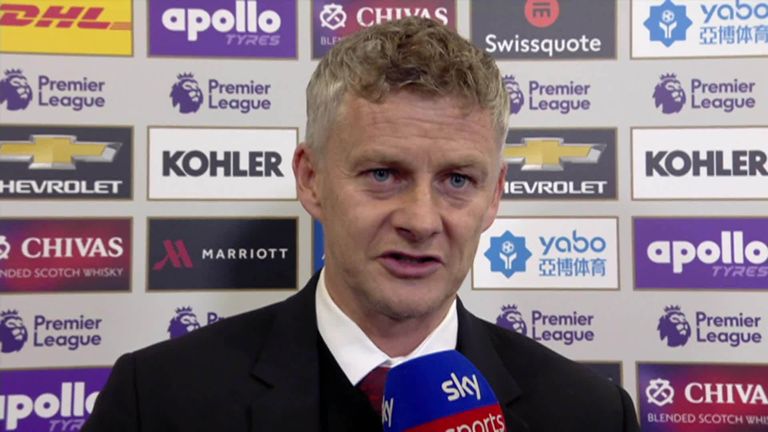 Liverpool boss Jurgen Klopp: "They were better than us and defended well, but in the end they scored a goal that shows all the problems with VAR. Mr Atkinson let the game run on because that is the protocol of VAR, and VAR shows there was contact and it was a foul. But we couldn't change that. They still had 60 or 70 yards to run to score the goal, but it's not cool.

"We then scored a goal that was disallowed. Pretty much everything went against us today, but we still didn't lose. We deserved the point, 100 per cent." 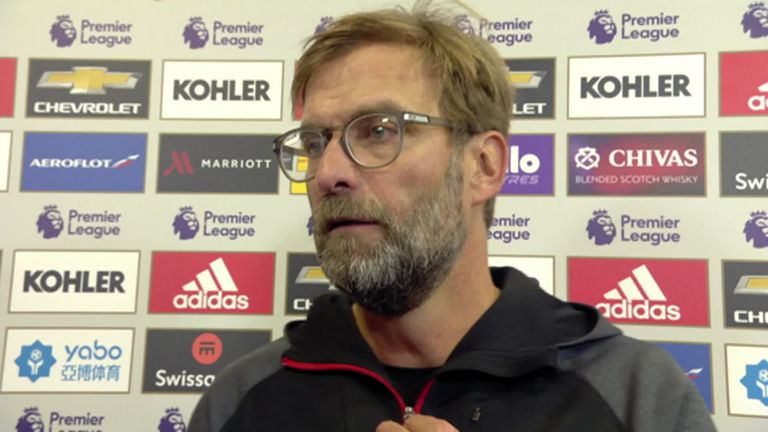 Jose Mourinho: "Klopp has never beaten United at Old Trafford, and I feel he didn't like the menu. He likes meat, and he got fish! I think Ole and United, after such a great effort, will feel a bit disappointed. At the start of the game I was asking United for heart. They had it but they had more than that."

Graeme Souness: "I think Liverpool got away with it a little bit. United worked their socks off in the first half. I think United will take a lot from that game. They turned up today."

Manchester United now go to Partizan Belgrade at 5.55pm on Thursday in the Europa League, before a trip to Norwich on Sunday at 4.30pm. Liverpool are at Genk on Wednesday at 8pm in the Champions League, and then host Tottenham at 4.30pm on Super Sunday, live on Sky Sports Premier League and Main Event.