Manchester United vs Liverpool. The FA Cup Fourth Round.

Bruno Fernandes fired Manchester United into the FA Cup fifth round as his 78th-minute free-kick earned his side a 3-2 win over Liverpool at Old Trafford.

Liverpool's poor form continued at the home of the fierce rivals; they have now failed to progress beyond the fourth round in five of their six seasons under Jurgen Klopp and the Premier League champions have recorded one win in their last seven games in all competitions.

Marcus Rashford completed the turnaround with his fourth Old Trafford goal against Liverpool (48) but Salah restored parity after running onto Roberto Firmino's pass (58).

The stage was set for Fernandes, who settled the tie 12 minutes after his introduction with a venomous free-kick from the edge of the box to set up a fifth-round tie at home to West Ham next month.

United entered the tie unbeaten in their last seven home games against Liverpool in all competitions since a 3-0 loss in March 2014. Last weekend's stalemate failed to inspire, but Liverpool came to Old Trafford dressed in hyper turquoise, and this fourth-round tie lived up to the hype.

The clash got off to an intense, end-to-end start, with Liverpool finding the breakthrough in the 18th minute. Firmino threaded a pass between Luke Shaw and Victor Lindelof to Salah, who was played onside by the latter and coolly lifted the ball over Dean Henderson.

United have won seven of nine league games having conceded the first goal, collecting 21 points from losing positions, and they made it 1-1 in the 26th minute. Greenwood had already had two half chances, failing to trouble Alisson, but his luck would change.

Paul Pogba broke up a Liverpool attack and Donny van de Beek sent a quick pass as the hosts raced forwards, with Rashford darting down the left before cutting back and sending a fine diagonal ball over to Greenwood on the right. The teenager matched the play with his unerring finish, firing right-footed across Alisson.

With 19 FA Cup titles between them, it was clear both managers were desperate to reach round five, and the first half drew to a close with Pogba and Scott McTominay heading over presentable chances from two Shaw corners.

Sky Sports' Nick Wright said: "Ole Gunnar Solskjaer has clearly instructed his side to target the right-hand side of Liverpool's defence. Trent Alexander-Arnold and Rhys Williams look extremely vulnerable up against Rashford and Shaw."

Shaw created three times as many chances as any other United player in the opening period but Jurgen Klopp stuck with his same starting XI for the restart - and three minutes later, his side were behind.

Shaw began the move as his throw-in was collected in midfield by Edinson Cavani, who rode the challenge of Thiago and found Greenwood. Rhys Williams failed to clear Greenwood's first time ball, which allowed Rashford to race through and coolly turn past Alisson.

Liverpool reacted well to falling behind, however, and James Milner was left holding his head in his hands after scooping over from close range.

But the 35-year-old midfielder soon helped Liverpool level as they capitalised on uncharacteristically sloppy Cavani play, with Milner leaving Firmino's cross for Salah to sweep home.

Ole Gunnar Solskjaer identified that Liverpool were in the ascendancy and duly turned to Fernandes on his bench. Twelve minutes later, Fabinho gave United a chance with the clock winding down after fouling Cavani on the edge of the box.

The Brazil international avoided a second yellow card but Fernandes would carry out the ultimate punishment. The Portugal midfielder pulled rank and buried his 28th goal for United to provide a classic FA Cup tie with the match-winning strike it deserved.

Rashford endured a frustrating afternoon at Anfield last weekend but he so often enjoys his duels with Liverpool on home soil.

He received a 5 in Sky Sports' player ratings seven days ago having been deployed, by quite some distance, as United's furthest-forward player, showing a "baffling indiscipline with the offside rule".

But here, back out in his preferred role on the left, he mesmerised in tandem with Shaw. Trent Alexander-Arnold had a torrid time containing him.

Manchester United boss Ole Gunnar Solskjaer: "It's fantastic to win games against last year's champions - they are a fantastic team and we have had good results over the past couple of years playing different systems but today we played well and won on our terms. 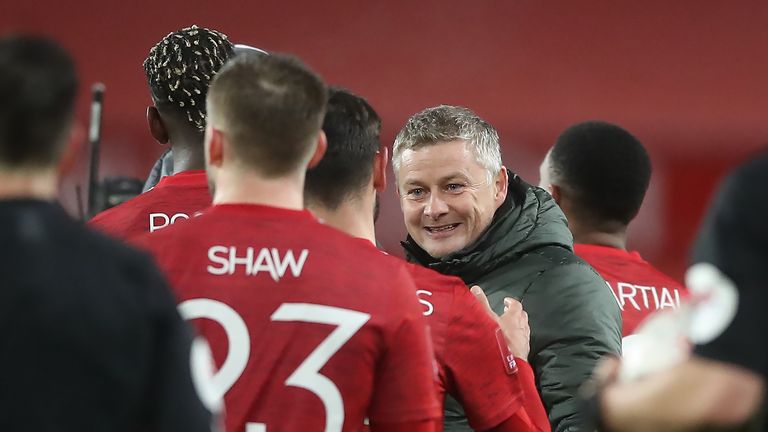 Ole Gunnar Solskjaer says his Manchester United side have found a way of playing that they believe in, following their 3-2 FA Cup win over Liverpool.

"We look at the difference of a year ago and six months back... you cannot take too many big strides at any one point, but layer by layer we are getting better and better, winning tight games. The morale and confidence of course is very good.

For us it's a good feeling to play on our terms. We have had some good results over the last few years, playing with the diamond or with a 3-5-2... different systems to nullify opponents but to win today with a positive selection and in the way we see our team, that's a statement to ourselves.

"That's the confidence boost that we can match the best with our style of football."

Liverpool boss Jurgen Klopp: "It's not what we wanted so it's always frustrating. If we wanted to win today, we had to be at the absolute top of our game but we made a lot of steps in the right direction. We started the game well, and then we made decisive mistakes. We had not enough protection for United's first goal, but it's good that my team likes to go forward and score goals.

"In the end, they scored three and we scored two but we can take positives out of this game. We know exactly what we need to work on, but we have to make steps. We made big steps tonight, which for the moment is OK. 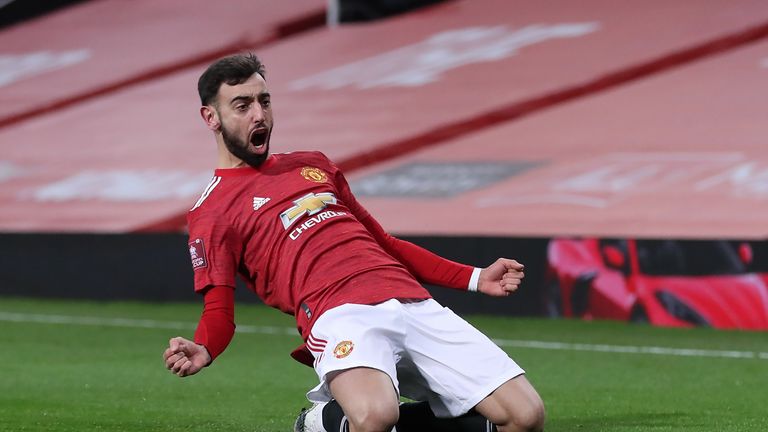 "We scored twice and we had other situations where we created well against a deep defending block. We made obvious mistakes around the goals, and with the third, your colleagues tell me it wasn't a foul but I didn't see it. I was told that it might not have been a foul for the free-kick but that's how it is. If you want to change something you have to work hard and that's what we'll do.

"There's no doubt about my trust in the players, but we need to be critical on ourselves. As a group, we are really together. If we have problems, we have to solve it together. Nobody is thinking about the very good things of the past few years. We are in this moment, and all we can is try to win football games. Tonight, I didn't see any confidence problems but obviously if we don't score for a while it's not good for confidence. It's about how you deal with it." 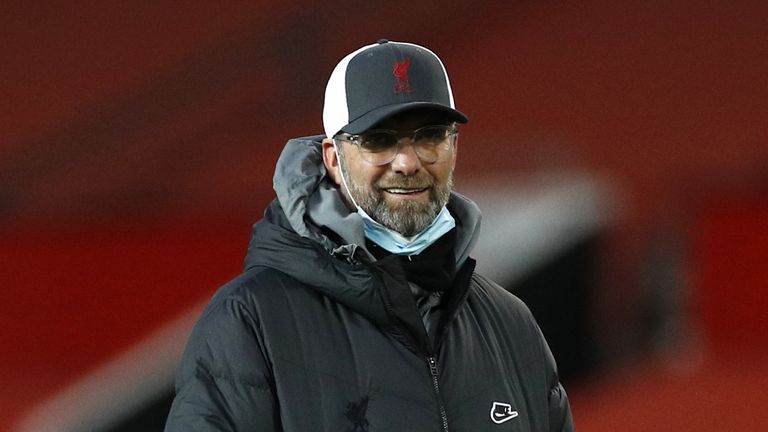 Liverpool boss Jurgen Klopp was encouraged by his side's performance in their 3-2 FA Cup defeat to Manchester United.

The FA Cup schedule has been confirmed, with the final set to take place at Wembley on Saturday May 15.