Match report and free highlights as a Riyad Mahrez penalty and a smooth finish from Kevin De Bruyne sent Manchester City 12 points clear of Liverpool, who play Leicester on Thursday; Pep Guardiola: "We are not the best team in the world. The best teams are Chelsea and River Plate" 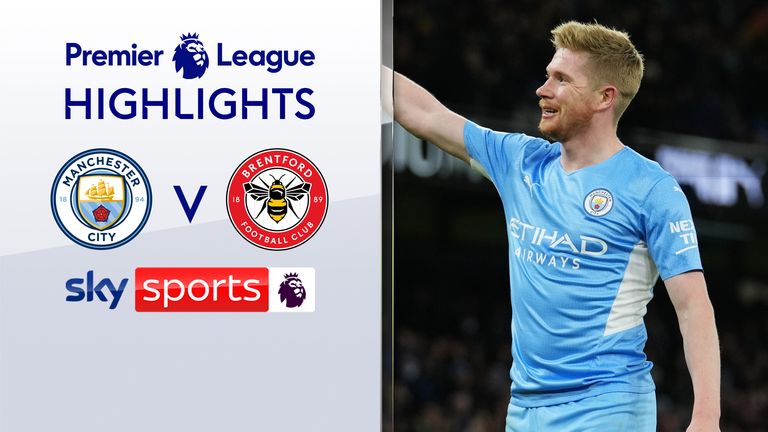 FREE TO WATCH: Highlights of Manchester City's win over Brentford in the Premier League

Manchester City moved 12 points clear of Liverpool in the Premier League title race with a 2-0 win over Brentford, who gifted City both of their goals.

Thomas Frank's side defended excellently for large periods but shot themselves in the foot for both of City's goals.

Firstly, Mads Roerslev gave away a needless penalty for a foul on Raheem Sterling from which Riyad Mahrez scored his 16th goal in all competitions this season. Then, the returning David Raya inexplicably handed possession straight to Sterling on 69 minutes and although the goalkeeper made a top save from the England man, De Bruyne was on hand to curl home from the loose ball.

The win lifts City 12 points clear of Jurgen Klopp's side, who play Leicester on Thursday.

Man of the Match: Joao Cancelo

Brentford's loss was their fifth in succession as their recent slump takes them closer towards the dreaded drop zone. They are now just six points ahead of the relegation zone.

Frank will have been pleased with the discipline shown for large spells but ultimately, although City controlled the contest in almost all aspects, their own mistakes cost them.

Phil Foden headed an early chance wide but it was not until towards the end of first half that the champions began to make the most of their considerable possession.

The sublime Joao Cancelo, who was full of creativity all night, charged in to meet a loose ball on 30 minutes but blasted over.

Sterling then volleyed over on the turn from a Foden ball and Aymeric Laporte then fired wide.

The breakthrough eventually came as Sterling burst into the area and was clumsily brought down by Roerslev. It was the 23rd time in the Premier League Sterling has won a spot kick for his side, the most of any player in the competition's history.

Mahrez converted in cool fashion but City couldn't really build on that after the break.

Raya exchanged passes with his defenders and then carelessly kicked straight to Sterling. He recovered to beat away the England forward's instant shot but De Bruyne pounced on the rebound to double City's lead.

There was no way back for Brentford as the City machine rolled on.

Pep: We are not the best team in the world 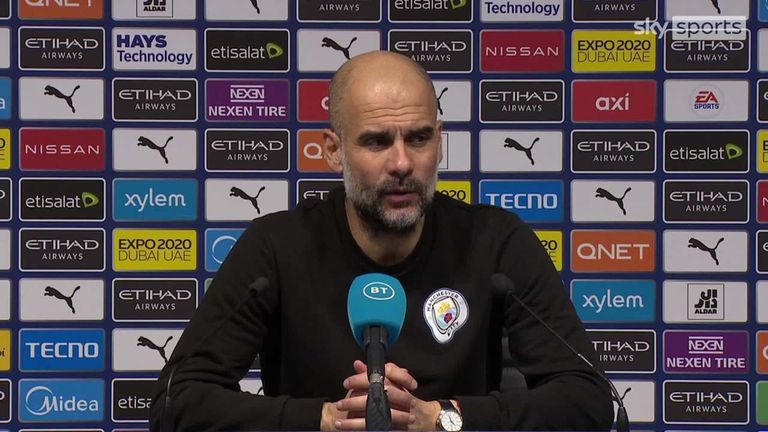 Pep Guardiola insists that Manchester City are not the best team in the world despite extending their lead at the top of the Premier League to twelve points after beating Brentford 2-0.

"These opinions, who is the best, the best? The important thing is we won the game and in three days we're going to Norwich to win the game.

"Liverpool have two games to play then we see the gap - 14 games to play, many points to play for and more tough games like today.

"Everyone is tough competition, but it is impressive at this stage to have 60 points - we have done incredibly well so far.

"I'm very satisfied with the performance. We conceded one shot, a few corners and were patient. Difficult when they defend deep with 10 players in their 18-yard box."

Frank: We were almost perfect

Thomas Frank said: "From a defensive perspective we were almost perfect. But the two goals - the penalty we should never give sway, don't slide down in the penalty area, and the second goal was a bad mistake.

"We made it difficult for them. The structure, discipline and mentality were there but those decisive moments, we didn't take them, and we got punished at the other end.

"We made those mistakes but the overall performance will give us confidence."

If Cancelo was a fabric, he'd be pure silk.

Is there a better full-back in the world in terms of playing the right ball at the right time? He's up there.

Cancelo's development under Pep Guardiola has been pretty astonishing this season, revelling in a tucked-in position off the right. He is becoming Pep's most important player. When he receives the ball in the final third you just know something special is about to happen.

His clever positioning is proving a difficult role for opposition players to stop. Brentford allowed him to have six shots on their goal in this City win which takes his overall shots tally for the season to a whopping 52 - the most posted by a defender and only nine more players have had more this season in the Premier League. Even Bruno Fernandes sits behind him in the list on 49. What is missing is his ability to turn his savvy build-up play into goals. His effort at Newcastle remains his only Premier League goal this season. But his low return matters little if City keep winning games. And with Cancelo in this form, that will be a common theme between now and the end of the season.