Ralf Rangnick's reign at Manchester United got off to a winning start as Fred's late winner overcame a stubborn Crystal Palace 1-0 at Old Trafford.

Rangnick looked set to endure a frustrating first outing as United interim manager as Palace weathered an early onslaught before staging another dogged defensive display at a ground where they were unbeaten in their previous two visits.

But the Eagles' resistance was broken 13 minutes from time when Fred curled his second Premier League goal of the season into the top corner of the Palace net with his unfavoured right boot.

For Palace, Fred's winner was compounded by the fact it came less than two minutes after Jordan Ayew had squandered their best chance of winning at Old Trafford for the second successive season.

The victory extends United's post-Ole Gunnar Solskjaer unbeaten run in all competitions to four matches and lifts them up to sixth in the Premier League, three points outside the top four, while Palace drop a place to 12th after suffering their third straight defeat.

Man of the Match: Fred

How Rangnick got off the mark at Man Utd

Rangnick was keen to downplay the speed with which his appointment could transform United's fortunes, but despite having had a mere handful of training sessions to impart his philosophy, there were visible signs of improvement from the outset.

Palace were overwhelmed early on by United's high press and interchangeable attack, which nearly delivered the breakthrough after six minutes when Alex Telles whistled a shot inches wide of the top corner.

Despite this, there was a timely reminder of United's susceptibility to the counter, as the returning Christian Benteke was played through on goal and forced David de Gea into his first save a minute later.

After Cristiano Ronaldo had flashed a free-kick over the bar, the Portuguese brought Bruno Fernandes' diagonal ball down on his chest in the area, but Palace centre-back Marc Guehi intervened with a last-gasp block to prevent his volley from finding the net.

Vicente Guaita prevented Ronaldo from converting from Marcus Rashford's cutback before a stunning goalmouth clearance from James Tomkins turned Fred's drive away, just as it appeared to be nestling in the top corner.

Ronaldo's sublime knockdown for Fernandes' instinctive volley saw United force another save from Guaita, but, having spent the majority of the first half on the back foot, Palace emerged from the defensive examination unscathed and with new-found confidence, albeit without creating a clear opening.

United could have snatched the lead on the stroke of half-time but Diogo Dalot whistled a shot just wide.

The hosts, who having won possession six times in the opening 25 minutes, were stymied by a tactical change from Palace which changed the complexion of the contest in the second half.

United looked out of ideas while searching for the breakthrough, with Telles' free-kick which clipped the crossbar one of their few chances.

Things could have taken a turn for the worse had Ayew converted from all of three yards after receiving Tomkins' knockdown in the United area, but he could only flash a shot agonisingly across the face of goal.

And within two minutes, Palace were made to pay, as substitute Mason Greenwood rolled the ball into the path of Fred, who produced an unerring finish into the top corner to ensure Rangnick got off to the perfect start.

What did Rangnick change?

"The system, for a start. Manchester United were set up in a 4-2-2-2 formation out of possession, with Rashford partnering Ronaldo up front, although all their attackers had licence to interchange positions when United had the ball.

"There was also, as expected, an increased emphasis on pressing high up the pitch. United won possession in the final third 12 times in total, according to Opta - that's nearly twice as many as they have managed in any other Premier League game all season.

"The full-backs provided the width, with Alex Telles in particular given licence to bomb forward. It seems he may have an important role to play under the new boss.

"The side's performance tailed off somewhat in the second half but Fred's superb strike made the difference and United fans can feel pretty encouraged by what they saw overall." 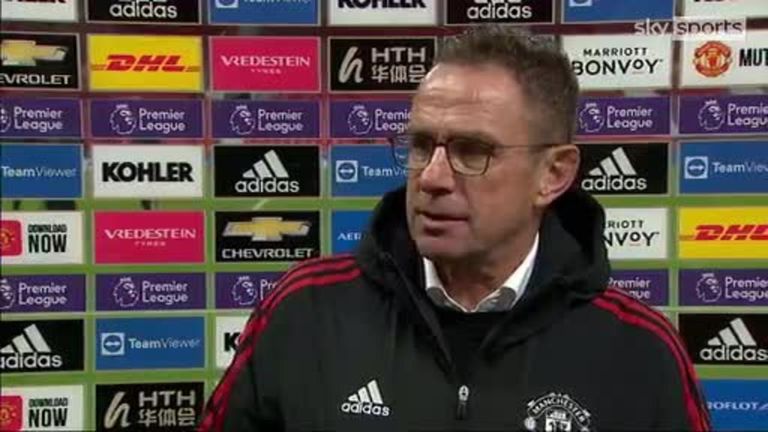 Man Utd interim manager Ralf Rangnick: "I'm more than happy. First of all, most importantly, we won the game. Second, we had a clean sheet, third I think we no doubt deserved to win, because we had control of the game.

"I suppose it (United's possession) was more than 60 per cent, and we didn't give them that many chances to score. To be honest I was positively surprised by the performance of the players. I didn't expect us to play at that level after only one-and-a-half training days together with them.

"The first half-hour was amazing, it was high intensity, high speed, high tempo - the only thing that was missing was scoring one or two goals." 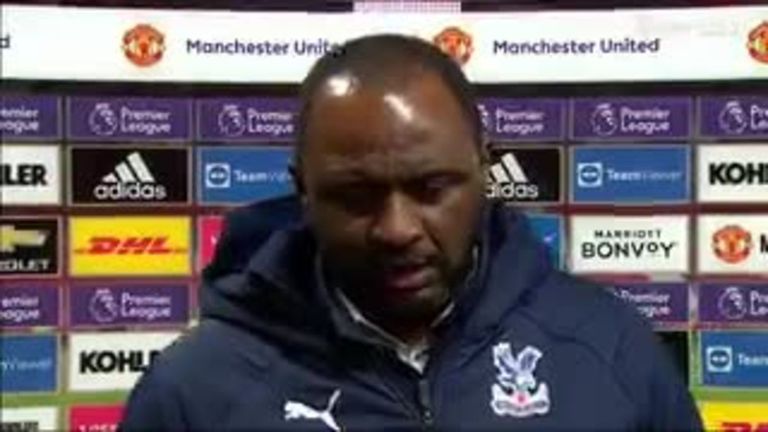 Crystal Palace manager Patrick Vieira: "It wasn't our best performance. We defended well as a team but in possession we weren't brave enough. I strongly believe there was space for us to play better.

"I thought the game would end as a draw; both teams didn't create many chances. When we had the opportunity to score through Jordan [Ayew], we didn't take it and we got punished straight away. This is the higher level, we need to learn, we need to learn fast.

"When you look at the number of chances they created, I think a draw would have been a fair result. I'm disappointed with the result, but we have to keep working."

Man of the Match - Fred

Fred has scored twice in 12 Premier League matches this season, as many as he scored in 76 appearances in his first three seasons in the competition with Manchester United beforehand.