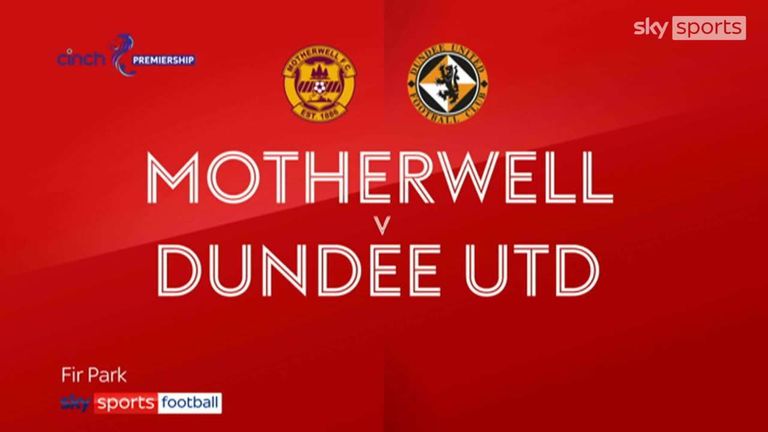 Highlights of the Scottish Premiership match between Motherwell and Dundee United

Watt curled over the head of United goalkeeper Benjamin Siegrist from the corner of the box in the 12th minute to consolidate his side's position in the top six of the Scottish Premiership.

Motherwell were by far the more dangerous side throughout and they held on to move a point behind their fourth-places opponents despite Barry Maguire's second booking in the 82nd minute.

The weather posed a bigger threat to Motherwell's three points than United amid incessant torrential rain in Lanarkshire.

The ball began to hold up in the early stages of the second half and the pitch was pretty much unplayable by full-time, but referee Steven McLean allowed the televised encounter to finish.

Motherwell came out determined to atone for a 3-0 defeat by Dundee's other team on Saturday and Watt had an even earlier chance to open the scoring after beating United's offside trap from a Sean Goss free-kick. The striker glanced a header straight at Siegrist.

Maguire and Callum Slattery also threatened from the edge of the box before Watt's ninth goal of the season.

Maguire's pass found Kaiyne Woolery in between United's defence and midfield and the wide man drove forward before playing a pass intended for the offside Kevin Van Veen.

A United defender diverted the ball into the path of Watt, though, and the former Celtic striker executed a stunning first-time finish.

United came into the game midway through the half and Louis Appere almost burst through but Nathan McGinley redeemed himself with a sliding challenge moments after being robbed in possession.

Motherwell were still threatening, though, and Slattery could not direct a diving header on target after good work from Van Veen.

United's only first-half effort on target was a weak long-ranger by Declan Glass which was easily held but the attacking midfielder was replaced by Nicky Clark three minutes before the break.

Motherwell started the second half as they did the first. Goss drilled just wide from long range and Van Veen turned and fired over from 12 yards after a return pass from Woolery.

The home side lost Sondre Solholm Johansen to a hamstring injury but were able to bring on skipper Stephen O'Donnell as his replacement.

United improved and got some balls into the box but they were still not troubling Liam Kelly, and Van Veen was off target from two decent chances.

Conditions were worsening overhead and underfoot. Appere got the ball caught under his feet as he ran into the box and Watt's low cross stuck in the saturated turf before it could reach Woolery.

O'Donnell missed the ball at the far post after Watt had flicked on Slattery's free-kick and United got a lifeline when Maguire received a yellow card for a foul on Ian Harkes near the corner flag, having been booked in the first half for a blatant pull.

United's only late chances came from two Charlie Mulgrew free-kicks but an offside flag stopped play after the first and the defender hit the wall with his second effort.

Motherwell manager Graham Alexander: "The goal was a brilliant one to win any game of football - a fantastic finish against a top goalkeeper.

"It would have been nice to get the other goal we certainly threatened. It would have given us a little bit of a cushion, because it got a bit nervy, certainly when we went down to 10 men.

"But I think it would have been unjust if we didn't win. We were very good against a very good team."

Dundee United manager Tam Courts: "Pre-deluge we started on the back foot and were tentative and it was almost like we were waiting on Motherwell capitalising.

"That forced us into tactical alterations and a change of shape and substitutions.

"Then the second half with the conditions it became a lottery. We never got the chance to play the type of football we are accustomed to so couldn't create the chances we expected.

"We resorted to huffing and puffing. We had free-kicks, corners and attempts at goal but didn't do enough that would be worthy of winning the game. Credit to Motherwell, they were excellent and physically dominated situations."

Motherwell take on Hibs at Easter Road on Saturday at 3pm, while Dundee United host Celtic on Sunday at 12pm in a game you can see live on Sky Sports Football.