Newcastle emphatically picked up back-to-back Premier League victories for the first time since December with a 3-0 win over 10-man Sheffield United at St James' Park.

Joelinton ended a 2,130-minute wait for a goal with his first Premier League strike at home (78) since his £40m move last summer, to put the seal on a one-sided second half, adding to Allan Saint-Maximin's opener (55) and Matt Ritchie's fine strike (68).

All three of Newcastle's goals came after John Egan was dismissed for a second bookable offence for pulling the shirt of Joelinton as he raced onto a long ball. The pair had tangled in the first half, resulting in a "ridiculous" first caution for the defender, according to his manager Chris Wilder.

The Magpies have now collected 19 of their 38 points this season against top-half teams, with Steve Bruce's side moving into 13th position - two points off Arsenal in 10th.

Sheffield United remain seventh, seven points off Chelsea in fourth place after the Blues came from behind to beat Aston Villa 2-1 later on Super Sunday.

How Newcastle made extra man count

While Sheffield United arrived on Tyneside riding high in the table, their top goalscorers John Fleck and Lys Mousset are on just five league goals each - Newcastle are the only other club not to boast a player who has scored more than five times this term.

Unsurprisingly, chances were at a premium during a tepid opening 45 minutes. Newcastle came into the game having won their last four league games against the Blades, and Bruce's men had the best chance of the first half.

Miguel Almiron released Joelinton into space behind the visitors' backline but, as he tried to open up his body to shoot across Dean Henderson, he scuffed his shot into the ground.

"He didn't know what to do. He must have been thinking of that chance for over 100 days, but he showed a lack of confidence and a lack of quality," Jamie Redknapp told Sky Sports at half-time.

Wilder will have called for more at the interval, with a snapshot from Billy Sharp over the bar all the visitors had to show for their efforts.

Whatever the team talk, the Blades boss was soon needing to shuffle his pack after Egan was shown a second yellow card five minutes after the restart for holding back Joelinton as he ran on to a hopeful clearance from Federico Fernandez.

Things got worse for the visitors five minutes later as Newcastle broke the deadlock with Sheffield United the authors of their own downfall.

Ritchie found space down the left and, after Enda Stevens completely missed his attempted clearance, Saint-Maximin was on hand at the far post to steer his shot past the legs of Henderson. Remarkably, it was the first goal scored at St James' Park for a home or an away team since mid-January.

Stung by the sluggish restart, the visitors came close to levelling when Sharp rose to meet George Baldock's deep cross but the veteran striker could only steer his downward header wide.

The second period was proving to be a far livelier affair as the impressive Saint-Maximin powered past Jack Robinson to set up Almiron but the Paraguayan could only direct his shot straight at Henderson.

Newcastle came into the game as the joint-lowest home scorers in the Premier League this season with 12, but they doubled their lead with half an hour remaining as Ritchie collected Isaac Hayden's pass before beating Henderson at his near post with a thunderous drive.

Newcastle were in total control by now, and Joelinton added the extra gloss, and a much-needed goal of his own, as he latched onto Almiron's low centre to score his second Premier League goal of the season and his first since August 2019 against Tottenham.

Newcastle boss Steve Bruce: "The one thing you want to do is get off to a good start. We had a big week 106 days ago by beating West Brom and Southampton. We've changed the system and I think that's what pleases me the most.

"Before now I don't think we were ready but we've now got our big players at the top end of the pitch and we've seen today they can be a threat.

"We've had a 3-0 win and no one was in to see it! But I'm sure around their homes, the fans tuning in will have a tin of beer to celebrate their team winning 3-0. It doesn't happen very often so I'm delighted. I'd love to have had a full stadium, but we'll accept it." 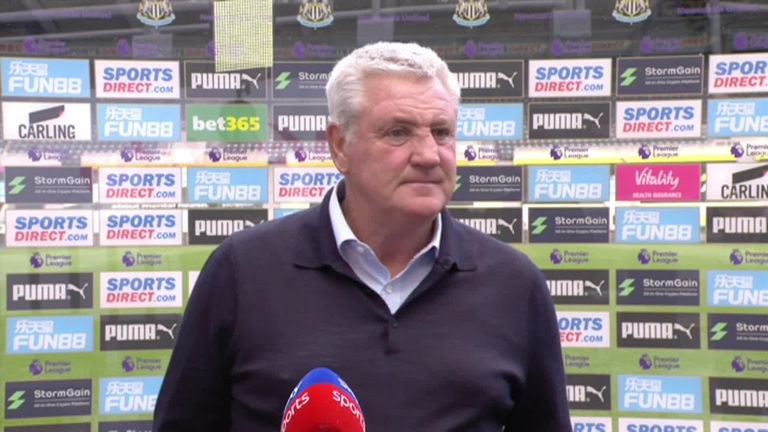 Newcastle boss Steve Bruce was delighted with his team's 3-0 win against Sheffield United, but admits it felt strange without the fans.

"It's about working in the present and the present is that we've put in two bang-average performances this week.

"I think the players need to give themselves a shake, you have to play at a maximum to get a result in this league and we usually have done all season. We're just off the pace at the minute and I can't put my finger on it." Sheffield United manager Chris Wilder was unhappy with the first yellow card that led to John Egan's dismissal in their 3-0 defeat to Newcastle.

Man of the match - Allan Saint-Maximin

After scoring with just one of his first 30 Premier League shots, Saint-Maximin has now netted with each of his last two attempts (also vs Southampton back in March). Indeed, only Jonjo Shelvey (five) has netted more times for Newcastle in the top-flight this season than the French winger (three).

The Frenchman attempted a game-high nine dribbles and had five touches inside the Sheffield United box during a superb performance.

Redknapp told Sky Sports: "Saint-Maximin was the best player on the pitch in the first half, he has been delightful, he has been on the ball, skilful, quick. He is the one player who has lit it up."

And after his second-half contribution, the Sky Sports pundit added: "He's s a special talent. This league really suits him."