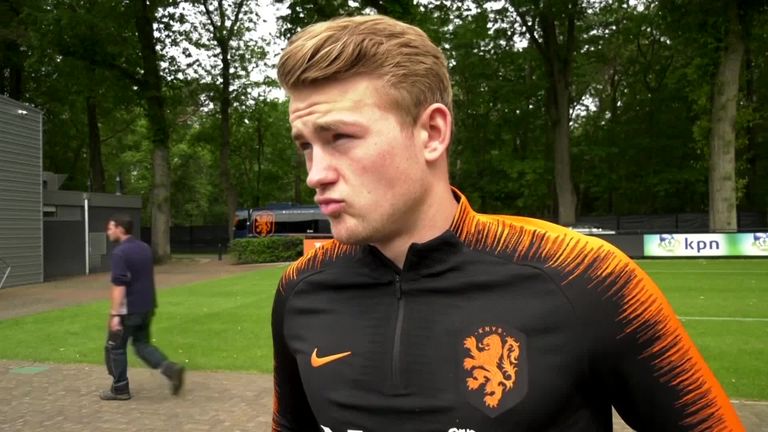 Ajax defender Matthijs de Ligt says he has no news on his future - and will see what happens after playing for the Netherlands in the Nations League.

Manchester United have ruled out a move for Ajax defender Matthijs de Ligt, according to Sky sources.

Reports in the national press over the weekend had suggested United could move for the £65m-rated Netherlands international this summer.

But Sky Sports News understands United have withdrawn the interest they held in De Ligt, with many among the Old Trafford hierarchy believing the 19-year-old is set to join Barcelona.

When asked about his future on Sunday, De Ligt said: "Where do I see myself? Well, obviously the Premier League is a big competition, Spain also, but you have other competitions, it's not (just) about those two.

"I still don't know anything about where my future is, so I see how it goes. First, we have to play two games (in the Nations League) and then after that, we'll see what happens next."

De Ligt has been a regular for Ajax over the past three seasons and captained the club to a league and cup double this campaign.

He was also instrumental in the Dutch side's run to the Champions League semi-finals - suffering defeat to Tottenham in the last four of the competition.

On Saturday, Barcelona president Josep Bartomeu confirmed the Spanish club were working on departures from the Nou Camp as well as incoming transfers.

De Ligt's Ajax and the Netherlands team-mate, Frenkie de Jong, has already agreed to move to Barcelona this summer for an initial £65m.

"Every year new players come in. So far we have confirmed De Jong's signing and now we will work on bringing in others and moving players on, as is normal every summer," Bartomeu said.