What will the summer hold for Danny Drinkwater, Vincent Janssen and Fraser Forster?

There is plenty of movement between clubs as the transfer season ramps up a gear, but what is next for some of the Premier League's forgotten men?

Whether it's form, injury or lack of opportunities, there are some talented players languishing in some squads, but could the 2019/20 season be their time to shine?

We take a look at where things went wrong for the Premier League's forgotten men and what the future could hold for them...

Somehow, Vincent Janssen is only 25. Despite joining Tottenham three years ago and only scoring two goals for the club, the Dutchman's age and handful of substitute appearances at the back end of last season means he now has the chance to start playing regular football again. 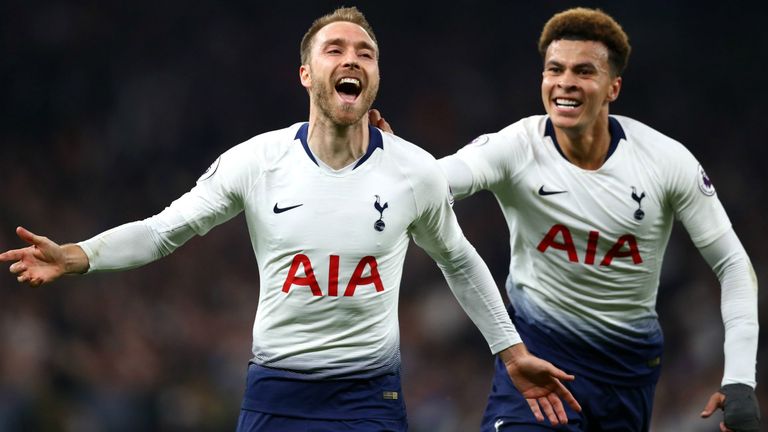 Highlights from Tottenham's win over Brighton in the Premier League in April, in which Vincent Janssen made a 10-minute cameo

Janssen spent the 2017/18 season on loan at Fenerbache and on his return to Spurs, was not issued a squad number. He then had surgery for a foot injury which ruled him out until Mauricio Pochettino threw him into the action against Brighton in April with Harry Kane injured.

With back-up striker Fernando Llorente linked with a move away and Tottenham already set to spend big on two summer acquisitions, it's possible Pochettino sees a future for Janssen at the club. But he must stay fit and have an impressive pre-season if he is to reach anywhere near the form which saw him score 31 times for AZ Alkmaar in the 2015/16 season.

But Tottenham normally play with Harry Kane as a solo striker - when he is fit - meaning Janssen will have to make do with impacting games from the bench.

Danny Drinkwater has gone from winning a Premier League title to earning a dream £35m move to Chelsea to being told he was surplus to requirements in the space of three years. He played in the Community Shield for Chelsea at the start of the season, but did not appear again and it seemed certain he would be leaving Stamford Bridge.

However, with Maurizio Sarri gone and the seemingly imminent arrival of Frank Lampard, coupled with Chelsea being hit with a two-season transfer ban, Drinkwater might have a future at the club after all.

It is unlikely he will be sold this summer given the need for bodies at Chelsea, especially in midfield, and he improves the club's home-grown quota. Whenever he is given opportunities, he must make sure he is fit and ready to take full advantage.

Goalkeeper Fraser Forster has had a remarkably rapid decline in fortune. He was first choice at Southampton for three seasons after moving from Celtic in 2014 and was a regular member of the England squad, earning five caps in that period.

But he was dropped in late 2017 after a string of poor performances, most notably on Boxing Day when Southampton lost 5-2 to Tottenham with Forster highly culpable. Since then, he has only featured a couple of times and did so just once last season.

Forster, 30, is still relatively young for a goalkeeper but his steep slump will have knocked his confidence. He will mostly likely have to seek a move elsewhere if he is to re-establish himself as a No 1, despite still having the pedigree.

Tiemoue Bakayoko returns to Chelsea off the back of a mixed loan spell at AC Milan, which saw his form pick up as the season progressed. He will not be remembered fondly by the Stamford Bridge faithful after a disastrous debut season that followed a big-money move from Monaco in the summer of 2017.

However, like Drinkwater, Bakayoko will know there will be opportunities at Chelsea following the transfer ban and he still possesses the ability to become the all-round powerhouse of a midfielder he threatened to be in Ligue 1.

At the age of 24, Bakayoko is reaching his prime and next season may well be defining if he is to have a future at Chelsea. If he hits the ground running, he can have the effect of a new signing.

When Timothy Fosu-Mensah first broke into the Manchester United team in 2016, there was a lot of hype, so much so that he signed a four-year contact later that year and was called up to the senior Netherlands squad not long after.

However, after a mixed year on loan at Crystal Palace and an injury-hit spell at relegated Fulham last year, Fosu-Mensah finds himself at a vital crossroads.

If Fosu-Mensah, who can play anywhere along the back four or as a defensive midfielder, can regain his fitness and form then he surely has a chance to fight for a spot in what is a shaky United backline.

It is far too early to claim Reece Oxford has not fulfilled his potential, but there is no doubt his career has stalled since he burst onto the scene for West Ham four years ago.

Since then, he has had three loan spells - two years at Borrussia Monchengladbach and one each with Reading and Augsburg - but has not seen the positive impact of a stint in the Bundesliga in the same way as fellow English youngsters Jadon Sancho and Reiss Nelson.

With the emergence of Declan Rice and the apparent slowing down in Oxford's development, it would be unsurprising to see him leave West Ham this summer but his age, 20, versatility and strength mean it would be well worth a club taking a risk on him given the potential he has previously shown.

Another player who has plenty of time to find success and regular football is Connor Wickham. The 26-year-old has had a torrid time with injuries since joining Crystal Palace in 2015 and has only played eight times with one goal over the past two seasons.

It is testament to his potential that last month, he was offered a new contract with the Eagles until 2021. Crystal Palace are in desperate need of a consistent goalscorer to complement their dangerous wingers with Christian Benteke out of form and Michy Batshuayi heading back to Chelsea.

It is likely Wickham will get chances, especially now Crystal Palace have committed to keeping him for the immediate future. The importance of a full, injury-free pre-season cannot be underestimated.

Sky Sports News is the home to three new shows dedicated to bringing you the very latest news from this summer's transfer market.