Watford's Gerard Deulofeu discusses his transformation from winger to striker

Gerard Deulofeu has had plenty of moves in his career. He went from Barcelona to Everton, then Sevilla, Milan and back again, but it is arguably at his current club, Watford, where he has made the biggest change of all.

The 25-year-old had spent the entirety of his career as a winger - impressing with his speed up and down the flanks - but last season, he played as a striker.

It was a shrewd change too, with Deulofeu producing his best goal return since playing for Barcelona B in the 2012/13 season - 12 goals in all competitions, plus five assists - and the Spaniard says he has always had his eye on a central role.

He told Sky Sports: "We spoke with the manager [Javi Gracia] at the beginning of the season and he said to me that I was going to play as a striker. Years before, I had been thinking that I wanted to play as a striker because you are nearer to the goal and you have more chances to score.

"Last season was really good for us, we can improve, of course and I can also improve my statistics. But I'm happy and I want to continue in that position.

"I had to adapt myself to Watford's style because there is a lot of long balls, direct and second balls. I had to adapt myself in that team and that type of football. In the last four or five months, I enjoyed playing with Troy [Deeney] and with people who go to the challenge and after, I can take some chances. 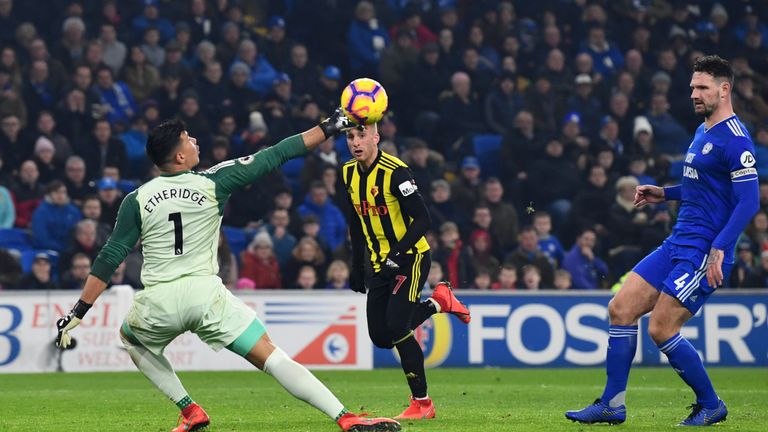 "We spoke with the manager [Javi Gracia] at the beginning of the season and he said to me that I was going to play as a striker. Years before, I had been thinking that I wanted to play as a striker because you are nearer to the goal and you have more chances to score."

Gerard Deulofeu on his change to a striker

"The Premier League is different to other places that I've played in. I've been at places like Everton, Barcelona, Milan and the system, the play and the shape is different. Here at Watford, it is completely different. Wherever you go, you have to put yourself in the team and help your team-mates to achieve something special.

"As a club, we want to do like last season, but much better. We have to improve because we can go in the top ten and compete in every game with your best. We have a lot of good players, a lot of quality but right now in football, you need more than that."

One of Deulofeu's stand-out performances last season was in the FA Cup semi-finals against Wolves. He scored twice as Watford came from 2-0 down to win the game 3-2, sending them to only their second FA Cup final.

Speaking about the game, he said: "It was a great afternoon for us and personally, for me. During the game, it was tough because we were 2-0 down and Wolves are a great team, but I went onto the pitch and gave my best to take it to extra time. Then in extra-time, we could kill the game.

"For Watford as a club and the town, it was historic going to the final. We couldn't win the final, but we played two games at Wembley and for Watford, that's amazing. After that game, you feel like you are the king but you have to be calm and enjoy the moment but you can always improve some things."

'Barcelona is my past'

Deulofeu joined Barcelona's academy when he was nine years old, making his way through the ranks and notched up 23 first-team appearances across two spells.

There was some to-ing and fro-ing between the Nou Camp and other destinations, but Deulofeu says that he is only concentrated on his future and not his past with the club.

"Every player feels the pressure at Barcelona," he said. "Clubs like Barcelona and Real Madrid, they are top teams because they have a lot of pressure but that pressure makes you the best player.

"I may not have had lots of success at Barcelona but the career is continuing. You can't stay in your past, you have to be in your present and thinking of your future. Barcelona is the past. There are a lot of good moments and memories but it is done.

"I've learnt a lot from every dressing room I've been in. In Barcelona, I played with the best players so you can learn from them in every training.

"The big players don't feel the pressure when it comes to the big games and the tough period between March and June. You can learn a lot when you have been in sides with those players.

"You have to be ready when the big moments come. Lionel Messi is the guy that, when there is a big moment or you have a big chance to score or play a pass, he always comes good. 100 per cent, he will make the right decision."

An 18-year-old Deulofeu burst onto the Premier League scene at Everton, first moving on loan in the 2013/14 season before joining permanently in July 2015. However, 18 months later, he was loaned to AC Milan before rejoining Barcelona.

But Deulofeu enjoys going back to Goodison Park - which he will do on Saturday as Watford travel to Everton in the Premier League - and still maintains a good relationship with the fans.

He said: "It was not too tough [moving to Everton at 18] because I had played for Barcelona since I was nine years old so I had been to a lot of countries and done a lot of travelling. I adapted myself in Liverpool, which is not easy, but I felt really comfortable there.

"My first season on loan at Everton, I was really young and I played some games. I'm really happy about this season because that was my first season in the first team. But after, it wasn't regular, I didn't play a lot of games. In football, you need a lot of things and maybe in that period, I was not in my best moment and I had to learn more from my team-mates.

"I had good moments at Everton and it is in my heart so this means that after that loan season, I went back to Everton because I felt really good there.

"I have a good relationship and a good connection with Everton fans. They love me and I love them. Every time I go to Goodison, the people are really happy and I'm proud about this."