During his appearance on Monday Night Football, Rafael Benitez tipped Liverpool to end their long wait for a Premier League title - and explained how he would try to stop them.

Benitez lifted the Champions League trophy as Liverpool manager in 2005 and while he could not deliver the title, he expects Jurgen Klopp to do so with the current crop.

"I think so," he told Monday Night Football when asked if Liverpool would win the Premier League this season.

"I think they have been signing the right players for the last few years. Spending money, obviously, but very good players in the right positions. The things that the manager was looking for. And they have the right balance.

"They have the goalkeeper and the defenders. They have the full-backs who go forward and the strikers have pace and ability. The midfielders, they press all the time. So as soon as they attack you, if they give the ball away, they are pressing you.

"We tried with Newcastle United but we could not get behind them because they were faster than our players. That's it. 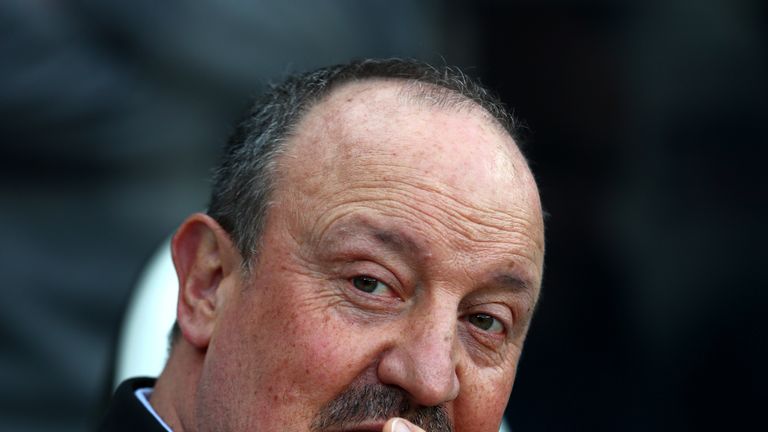 The space is there in behind so that is where you need to run. They press so quickly that the first pass has to be a very simple pass. You have to go away from the pressing.

Benitez on how he'd try to stop Liverpool

"If you don't have a team that is as strong as them then it is very difficult because you have to defend. If you have very good players who can keep the ball in possession then you can try but it will be difficult because they are aggressive.

"These three players up front, they can press, they are quick, so it is not easy to play from the back."

Klopp's team have won 24 of their last 25 Premier League games, drawing the other, and their tally of 73 points in that nine-month period is a dozen more than any other club in Europe's major leagues has managed to amass in that time.

The reigning European champions will take some stopping, something Benitez readily acknowledges. But the master tactician was not afraid to share some ideas of how to trouble them.

Indeed, he recalled getting the better of Klopp's Borussia Dortmund side in a Champions League tie during his time in Italy.

"When I was at Napoli we beat Borussia Dortmund at home because we were moving the ball quite quickly and we were running in behind when the full-backs were high," he explained.

So could the same tactic be used against Liverpool?

"The space is there in behind so that is where you need to run," he added.

"They press so quickly that the first pass has to be a very simple pass. You have to go away from the pressing. Afterwards, you have to go and put the ball behind the defenders. If you do that you will have more chances.

"At Newcastle, we were trying to run behind them but they were so quick that we couldn't get past them. If you have the right players with the right movements and the right pace, you can exploit those spaces behind.

"But they are so good, it is easy to say here. It is very difficult to stop them even if you know that."