Smalling: "Some of the other players said if you really hit the ground running, the love that you can have in this city is unbelievable. That's really what I've felt and so have my family. Long may it continue" 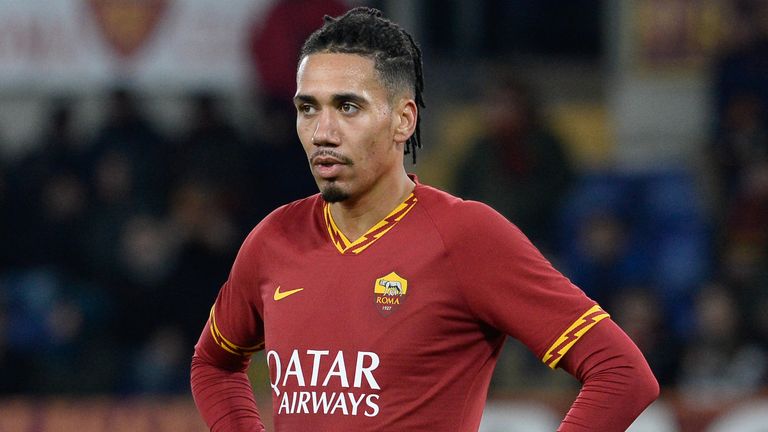 Chris Smalling admits he has "an interesting decision to make" - staying with Manchester United or moving to Roma permanently.

The 30-year-old centre-back is currently impressing on a season-long loan with the Serie A club and has quickly settled into life in the Italian capital, playing all 90 minutes in 20 of Roma's last 21 league matches.

Smalling is contracted to United until 2022 and the club have an option to extend that for a further year, but he has previously said he would consider making a permanent move to Roma after making such a strong start. 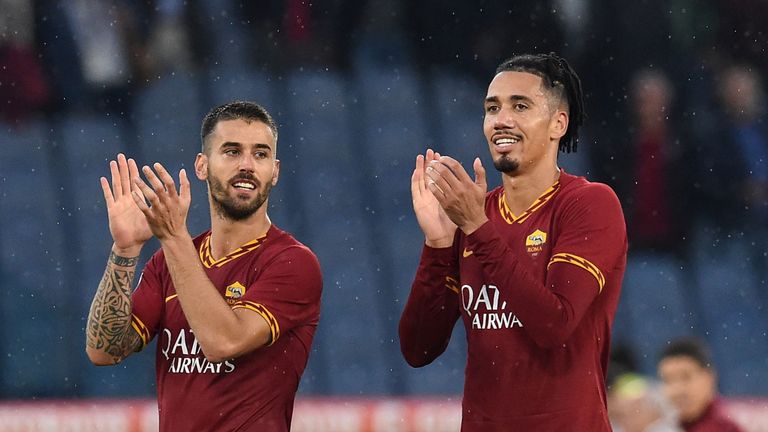 Roma boss Paulo Fonseca has since told Sky Sports News he wants to sign him and in a new exclusive interview, Smalling said: "When I first came it was exciting but also daunting because you're not sure what to expect.

"New country, new experience. But considering the way I've settled in, the love that I have felt, especially from the fans but everyone in Rome, it will be an interesting decision to make.

"Some of the other players said if you really hit the ground running, the love that you can have in this city is unbelievable. That's really what I've felt and so have my family. Long may it continue."

As it stands, Smalling is scheduled to return to parent club United at the end of the season but admits he was not surprised by the club's decision not to include a call-back clause in his loan contract with Roma.

"Not really," he said. "Even when I spoke to them, it was a case of 'let's have a good season, hopefully it all goes to plan, the team is successful and I am successful' and at the end of the season we'll sit down.

"I spoke to [Ole Gunnar Solskjaer]… Over the previous years, I had been used to playing in nearly every game when fit.

"So to cut that in half, when you look around at other opportunities, there was nothing better than [Roma] that could have come up.

"We spoke openly and we made it happen."

When asked about Roma boss Fonseca's comments, Smalling added: "It's great to hear. Having that belief and trust from the manager, from the coach, from the other players too - it's helping me thrive on the pitch."

Roma are currently fifth in the Italian top-flight after 25 matches, three points behind the Champions League places.

England recall on the cards...

Sky Sports News' North West reporter James Cooper was in Italy with Smalling and says Gareth Southgate has been keeping a close eye on the defender's impressive season...

Whether it was the bright February sunshine at Roma's training ground or the fact that we were chatting after the biggest win of the season (a 4-0 victory over Lecce), this was a happy and relaxed Chris Smalling who's loving his time in Rome.

From a playing point of view the move couldn't have gone better, he's become a go-to-man for manager Paulo Fonseca and someone affectionately nicknamed 'Smalldini' by the Roma fans.

It's a big club with big ambitions and right now there are few players in the Italian capital who've had as good a season as Smalling.

He wanted to play and he has, he's learnt new skills and is working on a new language with the challenge of conducting an interview in Italian by the end of the campaign.

But for someone who thought the international door was closed, he's been closely scrutinised by Southgate and his coaching staff.

Smalling last played for his country back in 2017 and his manager and team-mates are backing him to return to the England fold.

Perhaps fittingly their next game is against Italy in March and players he's come to know well.

Smalling's relaxed manner is about more than football, his wife and young son have embraced life in Rome too.

Yes there's been heartache with the death of one of their beloved dogs, following a poisoning incident, but family will also be an important factor in the decision he has to make about where he plays his football next season.

Switching to Serie A was definitely a gamble for the Smalling family and even he admitted how surprised he is by how comfortable he feels in Rome.

So, yes, he's expecting to make a big decision come the end of the season but before that is awaiting a decision from Gareth Southgate.

If England come calling again Smalling will be delighted but more fundamentally it will vindicate his decision to make the move to Italian football.