Independent appeal board agrees with FA that original penalty imposed on Sturridge was 'unduly lenient'; striker, who has now left Trabzonspor, 'gutted' his season is over Daniel Sturridge has been handed a worldwide football ban until June and fined £150,000 after being found guilty of breaching the FA's gambling regulations.

The former Liverpool striker, who terminated his contract with Turkish side Trabzonspor earlier on Monday, was handed a two-week ban and a £75,000 fine in July after a regulatory commission ruled that he had provided his brother with "inside information" and instructed him to bet on his possible transfer to Sevilla in January 2018.

The FA considered the decision to be too lenient and lodged an appeal, and an independent appeal board has now found that the regulatory commission misapplied the FA's rules and found proven two further charges against Sturridge which were originally dismissed.

"Daniel Sturridge has been suspended from all football and football-related activity from today until the end of 17 June 2020," said an FA statement on Monday.

"As a result, the appeal board has found proven two further charges which were originally dismissed. Other factual findings of the regulatory commission were left undisturbed.

"In relation to the sanction, the appeal board agreed with the FA that the penalty originally imposed on Mr Sturridge was unduly lenient and therefore increased his effective playing ban from two weeks to four months. The appeal board also doubled the fine to £150,000.

"FIFA has confirmed that the suspension will be of worldwide effect."

The 30-year-old's departure from Trabzonspor on Monday morning came as a surprise considering he signed a three-year deal in the summer, scoring seven goals in 13 appearances after being released by Liverpool.

"In accordance with the termination agreement, the football player gave up all his forward-looking rights and receivables."

'I'm absolutely gutted, my season's over'

"I just wanted to say it's been a very long, drawn out process over the last couple of years and [it's been] difficult to concentrate on my football, and it's also been a crazy few days, to be fair," Sturridge said in a video posted on his YouTube channel.

"I just want to say that I'm going to continue to campaign for professional footballers to be able to speak to their family and friends freely without the real risk of being charged.

"I feel it's the betting companies and the practice and the process of people being able to place bets on players moving clubs has to be stopped. 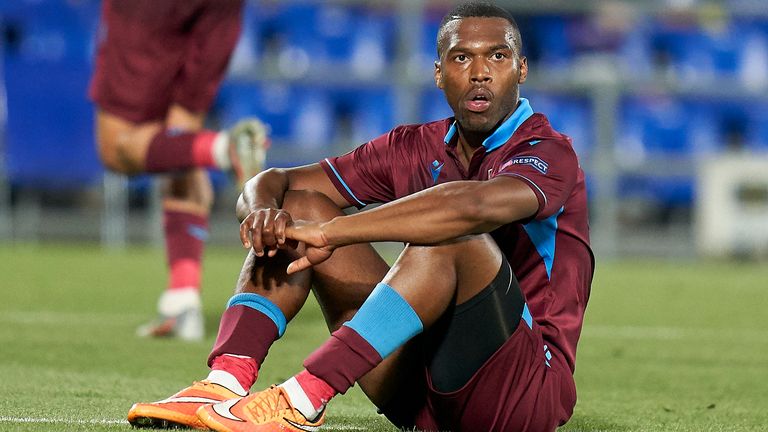 "And with that being said, [it's] devastating for me and I'm absolutely gutted about it, but my season's over.

"I'm devastated, I feel uncomfortable and I just don't think it's the right thing for me to continue accepting wages from a team that I can't contribute due to being banned.

"I have come to a mutual agreement with Trabzonspor to mutually terminate my contract. I would just like to thank the Trabzonspor family, from the players to the fans, the coaching staff, medical team, the president and the vice-president as well. I'm very grateful for you welcoming me into your city and allowing me to enjoy my football.

"Also I want to thank everyone who is supporting me and sending me so many wishes and messages. It's very much appreciated, obviously it's a difficult time for me so I appreciate that and I'm very grateful, so thank you very much."