Ayoze Perez interview: Choosing to join Brendan Rodgers at Leicester and wanting the best for Newcastle

Ayoze Perez tells Sky Sports about the mental challenges of the lockdown, how Brendan Rodgers convinced him to join Leicester, and why he still wants the best for Newcastle

Ayoze Perez is back where it all began.

A lot has changed since he left his boyhood club Tenerife to join Newcastle in 2014. Six years on, he has grown up, amassed more than 150 Premier League appearances and opened a new chapter of his career at Leicester.

But spending the lockdown back on the island conjures up old memories.

"Some days, when I am training on the terrace, I have time to think about things," he tells Sky Sports via video call. "I remember being very young, when I used to play in my yard here for hours. After so many years, many things happen and many things change, but it is good think back to that."

Perez is doing what he can to keep his spirits up. He is following an individual training plan devised by the staff at Leicester, with whom he is in regular contact, and enjoying spending some downtime with his family. But football's absence has left a void. The lockdown presents mental challenges as well as physical ones for players everywhere.

"That's the toughest part, I would say," he adds.

"We are all professionals. We know we have to try and keep ourselves in shape. Everyone is training. Everyone is trying to keep their fitness up. But mentally, it's a tough moment right now.

"We know we have to think about the bigger picture. The most important thing is the health of everyone. But we all miss football. We need to stick together to get through this."

Football's postponement presents more unfamiliar ground in a season of change for Perez. The 26-year-old completed his £30m move from Newcastle to Leicester in July, ending a five-year spell at St James' Park and swapping one end of the Premier League table for the other. Before that, however, Spain seemed his most likely destination.

"To be honest, Leicester were one of the last teams that came to my agent to tell him they were interested," he says. "There were a couple of Spanish teams who we were talking to and trying to figure out if we could do a deal."

Perez was open to the idea. He left Tenerife as a youngster having never played higher than Spain's second tier and has made no secret of his desire to one day play in La Liga. But it all changed when he was invited to London to meet Brendan Rodgers. 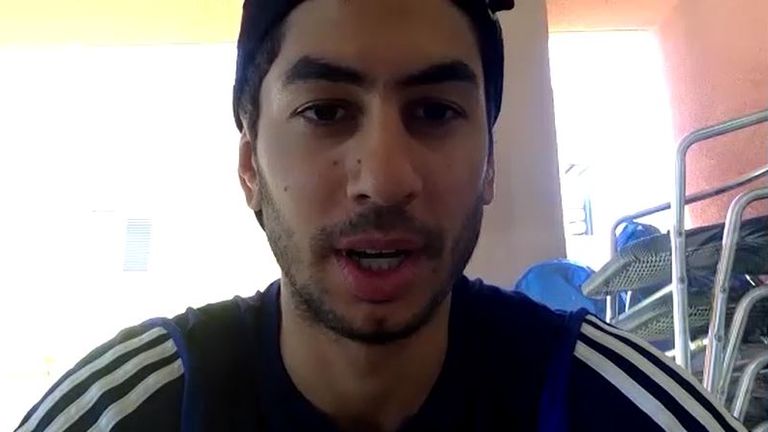 Brendan is such a great manager. The way he treated me and the way he spoke to me was important in my decision

"I flew to London and had a long conversation with him, trying to get to know each other, to speak a little bit," he says. "After I walked out of that meeting, I had the feeling that it was going to be the right decision to join Leicester. Brendan is such a great manager. The way he treated me and the way he spoke to me was important in my decision.

"Obviously, Leicester is also building up a great project. It's a great team which is developing. So, in the end, it was an easy decision. If you ask me today if it was the right one, I would say so."

Leicester have been transformed by Rodgers' appointment in February of last year. A strong finish to last season has been followed by further improvement in the current campaign. Their rise into the Champions League places has exceeded all expectations, but they are eight points clear of fifth-placed Manchester United and look a good bet to stay there.

According to Perez, it owes a lot to Rodgers' human touch.

"He's a great manager not only because of the pitch stuff, but also personally, you know?" says Perez. "He makes sure he speaks to everyone. He tries to help you with the personal side as well as the football side. He is very aware of every detail. Nowadays, that makes the difference, definitely.

"That's why he is such a great manager. He has got so much success in his career and for me, that's very important. It's very important in a dressing room, in a club. You need to have a manager like that to keep growing."

Rodgers has also helped Perez adapt to a new position, wide on the right of Leicester's 4-1-4-1 formation. The Spaniard, who still sees himself as a No 9 or No 10, does not have as much freedom to drift into central areas as he did at Newcastle, but he has earned plaudits for his defensive work-rate.

Despite a slow start to the campaign, there have also been seven goals and four assists in 25 Premier League games - giving him a higher combined total than Leicester team-mate James Maddison.

"I'm not going to lie, it's not my favourite position, but I just adapt myself to what Brendan wants," he says. "Last season at Newcastle, I played on the right wing as well, but more central, like a No 10 on the right-hand side.

"Now, I am trying to adapt, to make myself comfortable in this position, to try to get into the box as much as I can and have that feeling of scoring goals and creating chances. It's been a few months of trying to adapt myself to that position, to that team, but I'm feeling good. The most important thing to me is to be on the pitch and to be able to play as many games as possible. I'm trying my best to be at my best in that position."

It was difficult, too, to say goodbye to Newcastle. Perez split opinion with some sections of the fanbase at St James' Park, his fingers-in-ears celebration seen as a response to what he perceived to be unfair criticism, but he cherished his time there and wants to see the club do well.

"I just wish them the best," he says. "They are a special team for myself. It was a very important part of my career. They gave me the opportunity to become a professional footballer and I grew up a lot in that city, in that club. I always look at their results and I always hope for the best for them."

As for his own ambitions, Perez wants to build on an encouraging start to his Leicester career and help the club establish itself as a Champions League force. Beyond that, he still harbours hopes of playing for Spain.

Perez has not featured for his country since making two appearances for their U21s in 2014, but Rodgers has backed him for a senior call-up this season and there is emotion in his voice when asked what it would mean to him to win his first cap.

"It would mean a lot," he says, pausing to puff out his cheeks. "For me, that's so special. That's a dream that still has to come true. It's not easy. I know we've got such a great national team, so many good players. But obviously, being selfish, I would like to make my debut one day. It's a dream and it's still there. Hopefully in the next couple of years I can make it."

Until then, his return to Tenerife, to the place where it all began, is a reminder of how far he has already come.