Gabby Agbonlahor: I've never felt so ill in my entire life after testing positive for coronavirus 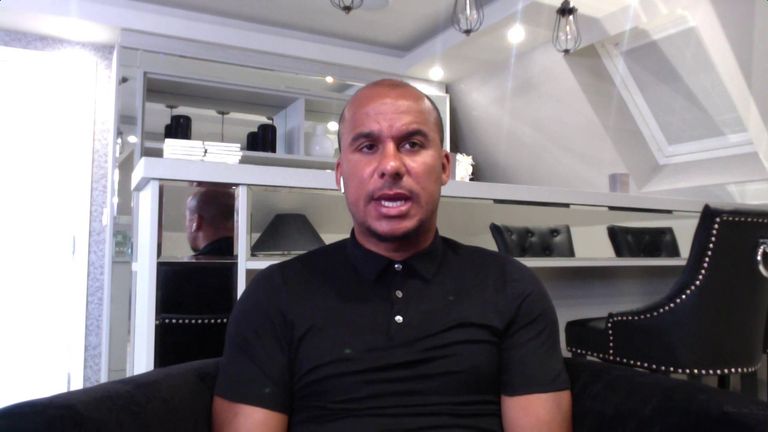 Former Aston Villa forward Gabby Agbonlahor has revealed he "never felt so ill" in his entire life after contracting coronavirus.

The Villa academy graduate was struck down with Covid-19 symptoms for 10 days in March, but he has now made a full recovery.

Data from the Office for National Statistics that shows black men and women are nearly twice as likely to die from coronavirus as white men and women has led to concern among some players.

N'Golo Kante - whose brother died from a heart attack in 2018 - and Troy Deeney - whose young son has suffered from breathing difficulties - have both opted against returning to training with their team-mates and Agbonhalor empathises with the pair.

"I caught the virus on March 15, and I've never felt so ill in my entire life," Agbonlahor told Sky Sports.

"The symptoms I had, they were terrible, so if I was a player and I was speaking to the players, I wouldn't want them to go through what I went through as it was a horrible experience and the virus is very deadly as we've seen.

"Why would you want to risk yourself and risk bringing it back to your kids? You don't want to do it. I'm sure the likes of Troy Deeney, N'Golo Kante will be at home or using a local area to do the same sessions that the players at Watford and Chelsea are doing.

"They're not sitting at home and doing nothing. They'll still be keeping to the fitness that the other players are doing, but just not doing it at the training ground, which for me is fine."

Earlier this month, Danny Rose also told the Lockdown Tactics podcast that he felt Premier League players were being treated like "lab rats".

This week, Premier League clubs voted unanimously to approve a return to contact training, in another significant step towards the resumption of matches "when safe to do so".

Agbonlahor warned those who have opted into the phased return to close-contact and competitive training: "Make sure you're being tested.

"If it's every day, every two days, so long as there's multiple testing for every player and every player that's in your squad is sticking to the rules. So, no one's going into places they don't need to be - they're going straight home from training, then I think it's different.

"But if you hear the players are doing other things, like going to places where they could catch the virus, then I'd be against going back.

"Some players are not going to have kids, they may live on their own, so it's different for every player and it's a decision for them to make on their own." Gabby Agbonlahor and Mark Schwartzer explain why injuries could be a problem for Premier League players as they prepare for the Premier League's return.

Even with all the necessary safety measures in place, there are substantive fears of there being a rise in injuries with players not fully prepared for the rigours of competitive football after such a long absence.

In the first two rounds of Bundesliga games back, the injury rate of 0.27 per game has more than tripled to 0.88 per game - a rise approaching 250 per cent - according to Australia-based sports scientist Dr Joel Mason.

Agbonlahor added: "I've spoken to a few people at different teams in the Premier League, and they're saying that the players are dropping like flies. It's quads, it's calves, it's hamstrings.

"The players are not ready for the intensity of training that they're doing. When you go back to pre-season, you start slowly and you work your way through over six or seven weeks.

"Now, the players are getting three or four weeks and are being rushed in because you might be going to Old Trafford to play against a fully fit Paul Pogba, Marcus Rashford and Anthony Martial.