Joe Gomez exclusive: How defender put injury worries behind him to become pillar of Liverpool defence

Watch Brighton vs Liverpool live on Sky Sports Premier League or Main Event from 8pm on Wednesday; Kick-off is 8.15pm

Joe Gomez has had injury setbacks to overcome during his time at Liverpool, but the centre-back is now a cornerstone of the meanest defence in the country and at 23, already a world, European and Premier League champion.

When Gomez arrived at Liverpool in June 2015, signed as a versatile defender from Charlton, he was joining a club that had finished the previous season sixth, a cavernous 25 points behind champions Chelsea.

The promising Gomez was brought in by manager Brendan Rodgers as part of a £100m summer splurge on Christian Benteke, Nathaniel Clyne, Roberto Firmino, Danny Ings and James Milner (albeit on a free transfer), with the Northern Irishman seeking to return Liverpool to the Champions League.

However, despite starting the first five league games of that season at left-back, Gomez's campaign was brought to a premature end after he ruptured his ACL while on England U21 duty in October 2015.

Gomez does have one good memory of that painful time in his career, however - it was while waiting for the scan on his injured knee that he first learned of Jurgen Klopp's arrival at the club.

"I got my scan for my ACL the day he came in," he said when we spoke earlier this week. "Obviously at that point in time as a young player, I remember being on that camp when it got announced that he was going to be our manager and I think I was 18 at the time, you are eager to come back and impress.

"And you are thinking, 'does he know about me? What does he think of me? Am I going to get a chance?' So obviously at that point, I was devastated at the timing being so bad, but straight away he spoke to me."

Talk of Klopp brings an immediate smile to Gomez's face and it soon becomes apparent the affection he has for the larger-than-life German, both as a boss and a friend. 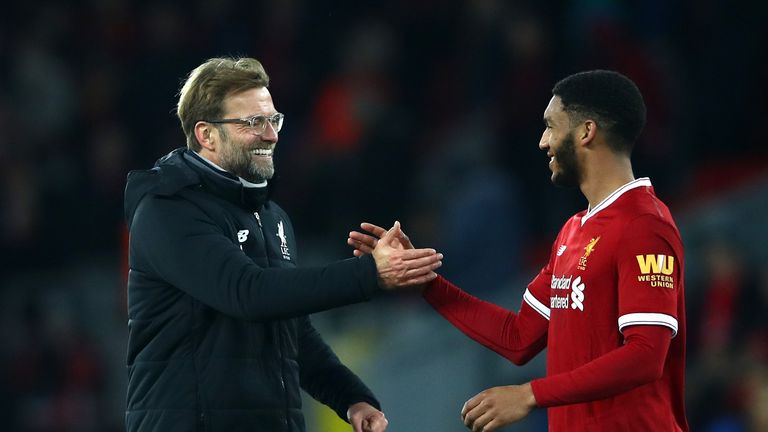 It is a nice feeling and probably when you get a hug it means he is in a good mood and we have done well as a team. We do not take them for granted

Joe Gomez on getting a post-match hug from Jurgen Klopp

"He is an unbelievable manager and an unbelievable person as well," he said. "I would say that I have learned just as much from him as a person just in my everyday life and attitude towards life as I have as a footballer and a professional.

"He is just a good person as well off the pitch and I think that translates to all of us and it makes us want to play for him and do our best on the pitch.

"And the fact that he is human and he does not seem like this distant boss that we cannot speak to and approach - he is an approachable person and a role model for us all."

That serious knee injury has not been the only setback Gomez has had to endure during his time at Anfield, the defender also damaging ankle ligaments in March 2018, before then fracturing his leg nine months later.

As a result, shorn of match fitness, the man many consider to be Virgil van Dijk's most suited centre-back partner missed the 2018 Champions League final, while also having to settle for a place on the bench when Liverpool won their sixth European Cup the following year.

"I remember getting the results in the doctor's office (after his ACL)," he said. "And as soon as I got the results he came in and spoke to me and just said, 'I'm here for you and I'll be waiting for you,' that sort of thing.

"Those words stuck with me throughout my whole rehab, which obviously was a tough one. I had my setbacks, but he was always communicating with me.

"Then coming back - he himself had an ACL injury when he was playing and I think that helped him relate and understand what I was going through.

"And not just once I got back, but just the process and understanding that I myself was still young at the time and that even when I thought I was ready, I was not ready and he knew when I was ready.

Prior to Liverpool's 4-0 loss at Man City, the Reds had not lost a Premier League game in which Gomez had started at centre-back

"He was massive for me and since then I have had numerous difficult injuries and he was always understanding and communicating with me.

"Thankfully I have had a longer period now where I have been able to get games under my belt and play consistently and I am thankful that he showed that patience in me, because throughout that time, you never know if you will get a chance again.

"And he showed faith in me, so I will forever be in his debt for that."

Not that the Catford-born defender is complaining, especially as there really is 'no I in team' at Liverpool, a collective drive instilled in the players by Klopp and a major factor behind the club's record-breaking campaign.

"It speaks volumes that as a team and a collective on the pitch, there is obviously not enough space for everyone to play and sometimes the starting XI stays consistent," said Gomez.

5 years on and thankful for the journey❤️...Look forward for what’s to come. Back at it tomorrow 💪🏽🔴 #YNWA https://t.co/b0FLJew56W

"But if you went around the dressing room and asked everybody about the manager, we would all speak of him in such high regard.

"As a group, it is a nice environment to be in and a nice group to play for and there are not really any egos in the dressing room. And I think that is a massive component to us being so tight this year."

Huge credit in Liverpool winning their first title in 30 years must go to their parsimonious defence, which has let in just 25 goals, while also keeping 15 clean sheets - both Premier League highs this season - and in particular to the partnership at its centre between Gomez and Van Dijk.

The stats show that since the duo first started together against West Ham in August 2018, not only have Liverpool lost less Premier League games on average, but they have also conceded less.

So, what then is the key to their formidable partnership?

"Everyone knows how appreciative I am to be in a team with him, to learn from him and be his partner at times," Gomez explains. "It is massive for me and I am thankful he came to the club. 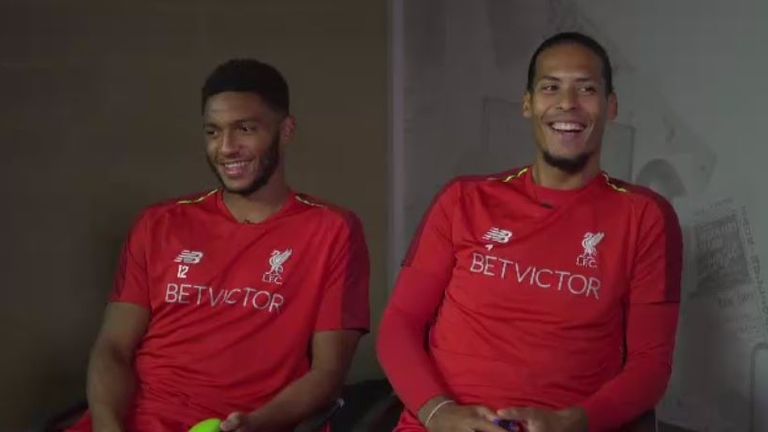 I genuinely go to him for advice. We have a good relationship, I consider him one of my closest friends in the team

Joe Gomez on his relationship with Virgil van Dijk

"He knows I have learned a great deal from him and we are good friends and that is the fundamental, the foundations of things, as well as the fact we get along, helps massively. And just communicating.

"Besides from that, as a unit and as a team, defensively we have grown. We can't take credit for some of those stats entirely, as a team we have definitely become more sound defensively and that is down to the gaffer and the coaching staff.

"But I enjoy massively playing with Virgil and I have learned a great deal from him and I continue to do so on a weekly basis, so I definitely know I'm blessed to be amongst top-quality defenders at the club and not just Virgil - Dejan (Lovren) and Joel (Matip), I've learned bits from each of them and a few of the other centre-backs over the years as well.

"Massively [it helps having an off-pitch friendship] - I genuinely go to him for advice. We have a good relationship, we are close, I consider him one of my closest friends in the team. That helps, of course, but as a team the main thing is we go out as a collective and play for each other, the manager and the club."

Meanwhile, a now injury-free Gomez is on course to play his most amount of games ever in a league season, while his return to the starting line-up last December after injuries to Matip and Lovren saw Liverpool keep clean sheets in 10 of the next 11 games he started as they established an unassailable lead over Man City and won the Club World Cup for the first time.

Come the climax to this never-to-be-forgotten, triumphant campaign, Gomez - now the complete modern defender with his exceptional pace, ability to read the play and bring the ball out from defence - can sit back satisfied with his integral role in Liverpool Football Club finally being back on their perch.