FREE TO WATCH: Highlights from Liverpool's win over Brighton in the Premier League

Mohamed Salah scored twice for Liverpool as they beat a plucky Brighton side 3-1, ending the Premier League champions' recent scoring drought on the road.

Liverpool had failed to score in their last five away games in all competitions - not winning on the road since February - but this strange run was quickly halted when Salah (6) and Jordan Henderson (8) found the net early on.

But Brighton were unfazed by their league-winning opponents, or the scoreline, and ran Liverpool close for much of the game, deservedly cutting their deficit in half after a fine finish from Leandro Trossard (44) just before the break.

However, Liverpool's quality saw them restore their two-goal lead in the 76th minute as Salah nodded home from an Andy Robertson corner to maintain their 23-point cushion over Manchester City in second. Brighton remain in 15th, nine points clear of the relegation places.

How Liverpool rediscovered their winning touch away from home

Liverpool sucker-punched Brighton with two quick goals inside eight minutes. The Seagulls were punished for trying to play out from the back as Mat Ryan picked out Davy Propper on the edge of the area, but the Dutchman lingered on the ball for too long, allowing a spritely Naby Keita to nip in and steal possession. His squared pass was then an easy, slotted finish for Salah's first goal.

Keita was the instigator again not long after, nicking the ball away from Dale Stephens in midfield and setting Roberto Firmino on a driving run towards the area before picking out Salah. The Egyptian was surrounded by defenders but spotted an unmarked Henderson, tapping the ball in for him to fire home with a low shot.

But Brighton responded well and had their own chances. In the 20th minute, Trossard's attempted shot was sent flying over the crossbar by the leaping body of Neco Williams. Soon after, Alisson made a smothering save as Neal Maupay tried to send the ball home at the near post with Keita sending the rebounded ball behind for a corner.

The hosts finally got their reward on the stroke of half-time. Tariq Lamptey had looked bright down the right flank - up against fellow 19-year-old Williams - and was set away once again by a slotted Pascal Gross pass. His fizzing cross was then turned home by Trossard, who hit a wonderful volley with his first touch to beat Alisson and pull a deserved goal back for Brighton.

Liverpool should have put the game to bed early in the second half. Salah drove into the area with his shot pinging off the legs of Ryan and Lewis Dunk before the goalkeeper pounced on the rebound. Dunk was in the right place again not long after as he saw a low Alex Oxlade-Chamberlain effort ricochet off his body before Henderson tried his luck for a second, but his strike went straight into Ryan's waiting hands.

Brighton could have levelled things up on the hour mark. After an initial corner was cleared, the ball came back into the area again with Propper glancing the ball on for Burn towards the back post. However, with the goal at his mercy, he could not sort his feet out to send it home and Georgino Wijnaldum was there to hack the loose ball away.

Liverpool sealed the points - and their first away win since February - with Salah's second goal in the 76th minute. Robertson delivered a corner and the forward peeled away from his marker Lamptey to head the ball past Ryan.

There was a concern late on for Liverpool as Henderson appeared to pick up a knee injury as he made a challenge of Yves Bissouma and was replaced by James Milner. Both sides kept seeing chances as the half wore on with Salah desperate for his hat-trick in the final few minutes, but he was unable to find the net again.

Liverpool needed a spark away from home to end their dreadful recent run and their main man Salah turned on the magic when they needed it. Both of his goals were well-taken and there was a real goalscorer's desperation for his third as the game went on, but all done with his trademark smile.

He also had eight shots - five of which were on target - and assisted Henderson's goal too, making it a wonderful performance from the Egyptian.

🥇Man of the Match, @LFC’s Mohamed Salah
2 goals (18th & 19th PL goals this season)
8 attempts (his most in a PL game this season)
5 on target
1 assist
2 chances created
12 touches inside opposition box (most in game) pic.twitter.com/fL05y2fw8H

His goals now put him third in the Golden Boot race with 19, one behind Pierre-Emerick Aubameyang and three behind Jamie Vardy with four games to go. Brighton manager Graham Potter: "I think we played well. Over the course of the game, we gave a really good account of ourselves, especially going 2-0 down in the manner that we did. Liverpool smelt blood, if you like, because we gifted them a couple of goals so we showed great personality to drag ourselves back into the game.

"We created some chances before we scored a really good goal so we put a lot into that game and there's a lot of positives for us. Of course, there are things we need to learn from as well which is normal but I'm pleased with a lot that we did. But again, we have to improve as well and that includes myself. 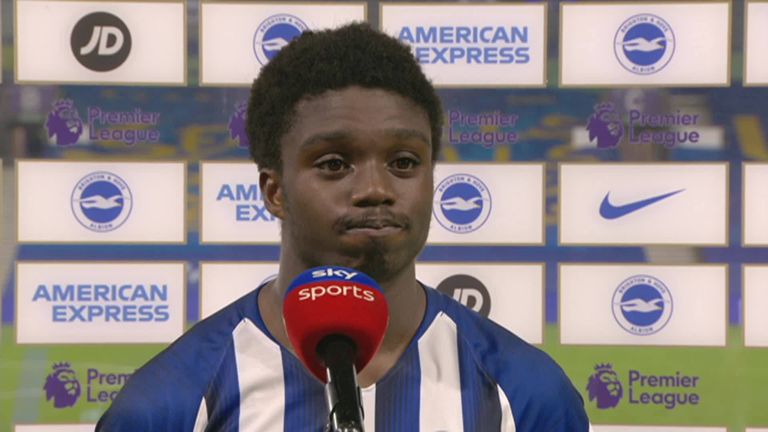 "We wanted to be brave and try to play our game against the best, it's a way to learn and improve your own game and we'll learn from that tonight. Overall, the way we responded to that situation was really good. The boys gave everything and I'm really happy with them."

Liverpool manager Jurgen Klopp: "I don't know what it is exactly [Henderson's injury] but it looks like the knee. We will see. We will have to make scans but we know that it's not nothing so that's already enough. "For their build-ups, we had a super solution and l liked how we did it. We don't have an influence on what the other team is doing, we have to react. We did pretty well in most of the situations but when you lose the ball in the wrong moment then they have the advantage. They deserved their goal but then we scored the third, we could have scored more, we had really big chances but all good.

"[Williams' half-time substitution] was just about the yellow card. On that side [of the pitch], we didn't protect him well enough. And in his first professional game, l couldn't tell him 'don't make a challenge anymore'. That was the only reason. I liked a lot his confidence and l liked a lot how he played." It's another tough home test for Brighton on Saturday when they welcome Manchester City to the Amex Stadium, live on Sky Sports (kick-off 8pm). For Liverpool, they also play on July 11 and host Burnley at Anfield (kick-off 3pm).