Jonny exclusive: Wolves wing-back on how they recover from defeat

In an exclusive interview with Sky Sports, Wolves wing-back Jonny discusses the challenge of bouncing back from defeat. Watch Wolves versus Everton live on Sky Sports Premier League and Sky Sports Main Event from 11.30am on Sunday; Kick-off 12pm

Wolves had to cope with an unfamiliar feeling on Wednesday evening.

After scoring last-minute equalisers against Burnley and Crystal Palace, as well as last-gasp winners against Besiktas, Slovan Bratislava and Manchester City this season, they were on the wrong side of one.

Beaten with just 30 seconds to go away to Sheffield United.

While that experience was a rare one for a team that still boasts a well-earned reputation as fast finishers, the routine that follows is familiar.

There are massages in the dressing room before they get back on the bus to the training ground, arriving in Wolverhampton at 11.30pm.

The players go to bed that evening wearing compression tights in order to aid the recovery in their legs.

The next game, in this case Everton on Sunday, is never too far away.

For Jonny Otto, Wolves' left wing-back, he returns home to a young son and a pregnant partner. Another baby is on the way. A girl this time.

"I am very anxious about it," he admits.

Not that he could think of much beyond events at Bramall Lane.

It is only natural he should relive that horrible moment when John Egan wrestled free to score that 93rd-minute winner.

"Of course you think about it," Jonny tells Sky Sports.

"But then you realise that you just have to get over it. That's hard. Really difficult. But we are playing again against Everton so we have to try to get some more points."

Strong characters within the Wolves dressing room soon begin the process of raising spirits, but everyone has their say. It is a collective effort to refocus minds.

"We have a lot of people here to support us. We have the medical team. We have the coaching staff. All of these people are trying to encourage us to move forward."

There is little choice but to look ahead. The players report to training at 9.30am the following day. Wolves boss Nuno Espirito Santo is back out on the pitch with those who did not feature against Sheffield United, taking the session as he does every day.

For those who were involved, Jonny included, it is a warm-down session. That means gym work, ice baths and more massages.

"Then we are back out on the pitch," he says.

Jonny has already played more than 80 games for Wolves since arriving in the summer of 2018. He made his international debut soon afterwards and has proven himself to be hardy competitor in the Premier League, ranking among the top tacklers around.

He adapted swiftly - there is plenty of rain in his native Galicia - and is a popular figure in the dressing room, where he counts fellow Spanish-speaker Raul Jimenez as a close friend.

Supporters have come to appreciate his work as a willing runner, constantly charging up and down the left flank, and if anything he appears more robust than before - adding muscle to his 5'7" frame. "After being so long without doing anything you at least want to keep in shape," he explains.

But there is no denying this has been a long slog for a Wolves side that will be hoping to extend their season beyond the 60-game mark with victory over Olympiakos when the Europa League resumes next month.

"It is pretty much like Christmas," he says. "There are a lot more games and it is difficult but we are in good shape. All we need to do is keep going until the end because we are nearly there."

Saturday morning means more training before the players report to Molineux in the evening. They stay at the team hotel and have dinner together. On Sunday, it is breakfast and back to Molineux for the lunchtime kick-off in front of the Sky Sports cameras.

While at the hotel, the pre-match meeting is when they go through the plan. Individual video clips have already been prepared for each player to let them know what to expect.

"The day before the game and the day of the actual game is when we look at it. That is when we get all the details. All the individual player performances are sent to us by email."

Everton will always stick in Jonny's mind anyway. They were the opponents at Molineux on the opening weekend of last season for a 2-2 draw that marked his Premier League debut.

"I am always going to remember that game," he says.

"It left a good aftertaste. I really enjoyed it."

But is he a better player since then? 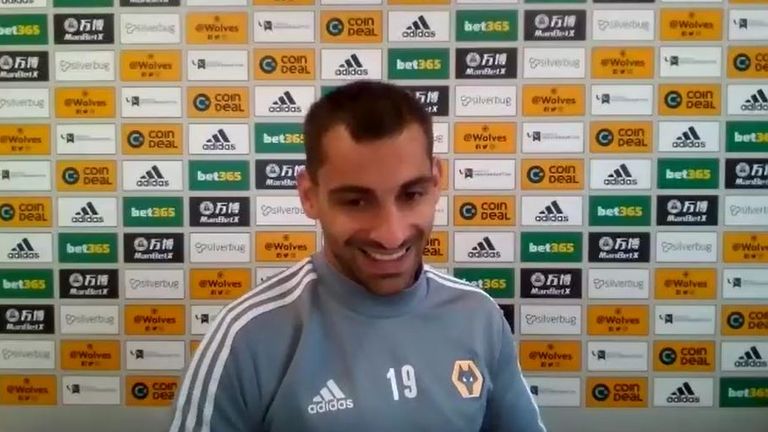 European football is important for us because it obviously helps you grow as a footballer.

Wolves could do with more than one point on Sunday. Having forced their way into the race for the Champions League places, back-to-back defeats have changed the mood. A number of teams below them are within striking distance. Europa League football is not yet secured.

Jonny has a tattoo that quotes the famous line from the film Gladiator - what we do in life, echoes in eternity. What Wolves do in the next four games could at least define their season.

"Everton is what we need to focus on but European football is important for us because it obviously helps you grow as a footballer," he adds. "We have been in the Premier League for two years and it has been really hard, working all year round to achieve good results.

"We are still working very hard for European competitions and there are only four matches to decide the final classification. We are very close now to deciding what is going to happen."

Watch Wolves versus Everton live on Sky Sports Premier League and Sky Sports Main Event from 11.30am on Sunday; kick-off is at 12pm