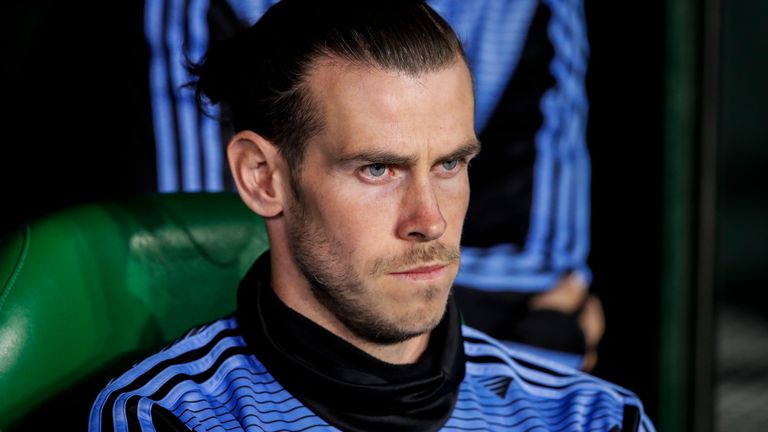 Real Madrid head coach Zinedine Zidane has said Gareth Bale was left out of the squad to face Manchester City because he "didn't want to play".

Bale has become a peripheral figure at the Bernabeu after falling out of favour under Zidane.

His omission from the travelling party this week fuelled speculation over his future and now Zidane has said this was the player's choice.

Zidane said: "It was a personal conversation I had with him. He preferred not to play. The rest remains between me and him but he said he didn't want to."

The Spanish champions are 2-1 down after the first leg of the last-16 tie at the Bernabeu in February.

Zidane said former Chelsea playmaker Eden Hazard, who has endured an injury-hit season, was fit to feature after overcoming an ankle problem.

Zidane said: "It is true he was feeling it a bit towards the end of the (La Liga) season, but now he is much better than he was. We have had a lot of time to prepare for this game and I think he is OK and full of confidence."

It has been a difficult season overall for the 31-year-old Wales international, who has scored just three goals and made 14 starts across all competitions.

But his agent Jonathan Barnett recently told the BBC Bale had two years left on his Real contract and was not intending to leave.

Midfielder James Rodriguez has also been left out of the squad for the Man City trip by Real boss Zidane, while forward Mariano Diaz is absent after he tested positive for coronavirus last week.

Real say captain Sergio Ramos will travel with the team to Manchester.

However, the defender will not be able to play any part in the match due to his red card in the closing stages of the first leg.

Sky Sports News understands Bale is not injured for the tie and Spanish football expert Alvaro Montero told us: "We have to remember that, in the last nine games in La Liga, Zinedine Zidane only counted on Gareth Bale for one game.

"One year ago, I was in Washington with Zidane, the day he said it's better for him [Bale] to go today, better than tomorrow.

"The truth is there was only one option - China [Jiangsu Suning made an offer for Bale last summer]. He didn't want to go to China.

"He wants to return to the Premier League, but he earns €70m [five-year contract] at Real Madrid.

"There's no club in the world, after a player that has been two seasons without playing more or less, who can pay for that. It's a lot of money.

"So, I think it's going to be a tricky situation but I am afraid he's going to stay at Real Madrid."

Despite winning four Champions League titles with Real Madrid, Gareth Bale divides opinion. He stands at another crossroads in his career.

Zinedine Zidane departed days later, but Julen Lopetegui's ill-fated five-month spell and subsequent sacking was blamed on Bale by Madrid legend Jorge Valdano. To compound matters, Real turned to their former manager to avert a growing crisis in March 2019, and their relationship has been as expected.