A Gabriel Jesus header and cool penalty from Kevin De Bruyne sealed a thrilling 2-1 comeback win for Manchester City at Real Madrid, who had captain Sergio Ramos sent off in the first leg of their Champions League last-16 tie.

Isco had put the hosts ahead at the Bernabeu on 60 minutes but Pep Guardiola was rewarded for his surprise selections and set-up when Jesus nodded in De Bruyne's cross (78) and the Belgian ended City's penalty woes by converting his spot-kick seven minutes from time.

Real Madrid's misery was compounded moments later when Ramos was shown a straight red card for chopping down Jesus on the edge of the box as the City striker looked set to make it three and it's advantage City ahead of the second leg at the Etihad on Tuesday, March 17.

There was bad news for City in the first half, though, when key defender Aymeric Laporte limped off with an injury, having only just returned to the first-team fold after a long-term knee problem, but that was the only disappointment on what was a historic night for Guardiola and his side.

How City secured a historic victory...

On the day Manchester City official filed an appeal at the Court of Arbitration for Sport (CAS) against their two-season ban from European competitions, Guardiola sprung somewhat of a surprise with De Bruyne playing predominantly as a false nine with Jesus plying a lot of his trade on the left flank.

Jesus had plenty of defensive work to do in the opening stages as Dani Carvajal got forward, but he was still a threat at the other end of the pitch as City created the first clear cut opportunity of the game after 20 minutes. De Bruyne played Jesus in behind the Real defence and the Brazilian cut inside onto his right foot before unleashing a shot that was pushed away by Thibaut Courtois.

For the most part, Guardiola's tactics were nullifying Real, but they were given a huge scare just before the half-hour mark.

Ferland Mendy's cross was powerfully headed towards the bottom corner by Karim Benzema and Ederson produced a superb save to push the ball out to the edge of the six-yard box. Vinicius Junior appeared well placed to latch onto the rebound, but the 19-year-old slipped as he attempted to tap the ball home from close range.

City were then hit with a major blow as Laporte, who has recently returned from long-term injury, was forced off and he was replaced by Fernandinho.

Despite the setback, it was the visitors who came close to an opener before the break as Courtois made a mess of a De Bruyne corner in first-half stoppage time before a combination of Ramos, Casemiro and Federico Valverde cleared Jesus' shot off the line.

Raheem Sterling and Sergio Aguero were named on the bench at the Bernabeu Stadium. England forward Sterling was back in contention after three weeks out with a hamstring injury while Aguero, who missed a penalty against Leicester last weekend, was replaced by Gabriel Jesus. David Silva was also among the substitutes while defender Nicolas Otamendi returned to the side for the last-16 first-leg clash.

Gareth Bale also had to settle for a place on the Real bench despite their loss of Eden Hazard to injury. Karim Benzema led the attack along with Isco and Vinicius Junior.

City continued to be the better side after the break, pushing forward with ambition and Real needed Courtois to deny Riyad Mahrez twice in quick succession.

And they proved to be crucial interventions from the Real goalkeeper as his side took the lead against the run of play on the hour mark. Rodrigo lost the ball in the midfield after a mix-up with Nicolas Otamendi and Kyle Walker missed a chance to clear as Vinicius Junior burst through before squaring for Isco, who calmly finished past Ederson.

Guardiola turned to his bench, sending for Raheem Sterling, while Real brought on Gareth Bale, and it was City who roared back as Jesus climbed above Ramos to head De Bruyne's cross past the dive of Courtois to bring the scores level with 12 minutes remaining.

Sterling was then involved as City took the lead five minutes later. The England forward was scythed down in the penalty by a poorly timed tackle from Carvajal and with City's penalty woes fresh in the mind - they had missed five of their last seven penalties - De Bruyne stepped up and made no mistake, sending Courtois the wrong way.

To make matters worse for Real, Ramos was sent off - the 26th red card of his career - in the closing stages for denying Jesus another goalscoring opportunity as City took a huge step towards the last eight.

Real Madrid boss Zinedine Zidane: "I'm not happy that we play well and with ten minutes left we change, and we make errors which hurt us. We needed 90 minutes of total concentration - especially against a team like City. We know that there's half this tie left and now it's simple - we have to go to City and win." 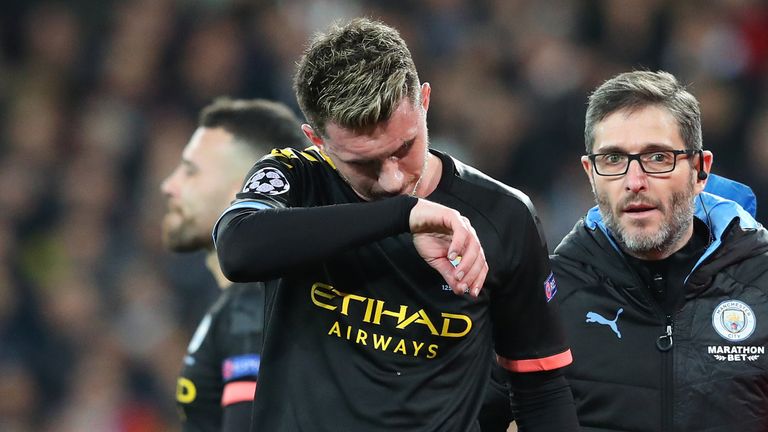 Pep Guardiola could not hide his disappointment over Aymeric Laporte's latest setback as the defender was forced off against Real Madrid.

Manchester City boss Pep Guardiola: "We created opportunities all night. Courtois played really well. But for my experience in this competition, you don't control 90 minutes in the Champions League. We produced a good save from Benzema when it was vital, and we created really good goal chances which most teams don't do in this stadium. To win in the Bernabeu is a great satisfaction. We aren't used to such results and this tells us we can go to any stadium and win."

Manchester City's captain for the night was at his inspirational best at the Bernabeu.

After going a goal behind, the Belgian dragged his side back into the game by setting up Jesus' equaliser before scoring his 50th goal in all competitions for Manchester City from the penalty spot to secure victory.

This was the first time he has both scored and assisted in a Champions League match and what a night to do it.

"Who could have foreseen Gabriel Jesus lining up as an auxiliary left-back at the Bernabeu? Who could have predicted Kevin De Bruyne playing as a false nine? Even by Guardiola's standards, this was something else."

- Manchester City have beaten Real Madrid for the first time in their history.

- Real Madrid have lost a Champions League home match despite scoring the opening goal for just the second time, also losing in this manner against Milan in October 2009.

- Man City boss Pep Guardiola is only the second manager to win two Champions League away games against Real Madrid, after Ottmar Hitzfeld. He is the first to do so with two different clubs.

- Madrid's Sergio Ramos received his fourth Champions League red card - only Edgar Davids and Zlatan Ibrahimovic have as many (both four).

Man City have a date at Wembley next when they face Aston Villa in the Carabao Cup final, live on Sky Sports Football from 3.30pm on Sunday, March 1; kick-off at 4.30pm.

The return leg of this fixture will be on Tuesday, March 17 at the Etihad Stadium; kick-off at 8pm.