Thomas Partey: Arsenal's £45m midfielder is a 'physical marvel' who 'does everything well'

Partey arrived on the island as a highly-rated but untested midfielder. He left it a year later having taken an important step on a road that would eventually lead him to the top. From Mallorca, he went to Almeria, again on loan, before returning to Atletico to become a key player under Diego Simeone.

Mikel Arteta hopes Partey will transform his midfield and those who have followed his career from the start can understand why.

"You could quickly see that he was a player with attributes which were very advanced for his age," Baños tells Sky Sports.

"Above all, it was the precision of his passing. He was very effective in terms of his delivery. He also covered a lot of ground and positioned himself well on the pitch tactically."

Until then, Partey had been playing for a side called Tema Youth in Ghana, where he came to the attention of an agent named Jose Jimenez, who offered to organise a trial for him at Atletico. Partey, determined to seize the opportunity, would later recall packing his bags and leaving without even telling his family.

It was a leap of faith but he would not regret it. Partey signed for Atletico soon after his trial and before long he was excelling in their academy.

"Atletico Madrid always have strong players in their youth teams," says Baños. "Over the years I was fortunate enough to coach guys like Lucas Hernandez and David de Gea. But the truth is that Thomas was a player who made the difference. He had great potential."

Partey was swiftly promoted to Atletico's Juvenil A (U19) side and soon enough Simeone and his assistant German Burgos became aware of the youngster's talents. At the end of his first year there, Partey even joined the senior squad on a pre-season trip to Colombia. 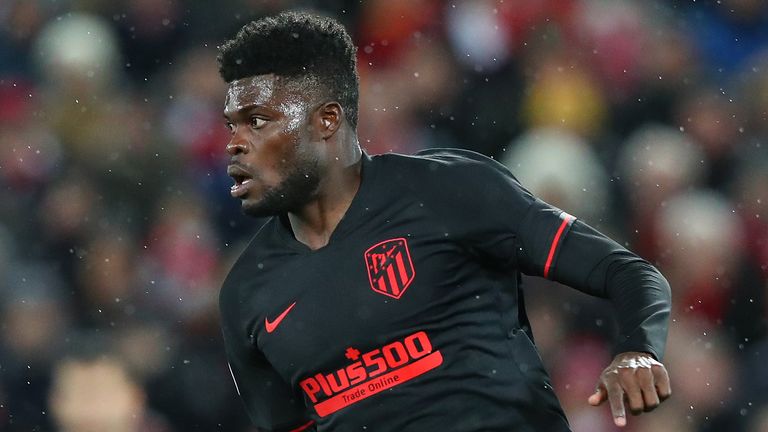 "He was a very attractive player to them because he was different for his age," says Baños. "He was a very disciplined player, as he is now, and he was very grateful and respectful too.

"I always remember that every day after training, he would shake your hand and thank you for the session and the advice you had given him. He has always been a very good player to have in the dressing room."

Those traits are now part of the appeal to Arteta, who values team spirit and togetherness highly, but for Partey at that age, the competition for places at Atletico was such that it was not easy to see a route into the first-team. Simeone could already call on experienced trio Gabi, Tiago and Mario Suarez in central midfield. Koke and Saul Niguez were next in line.

So, at the start of the season in which Atletico would go on to win an historic title, Partey ended up joining Mallorca, who had just been relegated to Spain's second division after a 16-year spell in La Liga.

Partey's only previous senior experience had come with Atletico's B team in Spain's third tier but he quickly established himself there, displacing experienced club captain Jose Luis Marti in central midfield and going on to make 38 appearances over the course of the campaign, scoring five goals.

"He ended up being an undisputed starter," Oltra tells Sky Sports. "He worked hard and showed very good things."

For all his undoubted quality, however, Partey still had much to learn.

"There were times when he would lose the ball in dangerous areas, close to our central defenders," says Oltra.

"He found turning in that zone difficult and the first pass wasn't always easy for him. He made some errors but we were always on top of him, showing him videos. He was very receptive to our advice and to everything we tried to teach him.

"He already had a lot of great attributes, but he was a boy who wanted to grow and improve. He was an excellent professional, which is vital for any footballer. He looked after himself, he loved football and he lived a very organised life. Those factors have helped him reach the level he's at now." 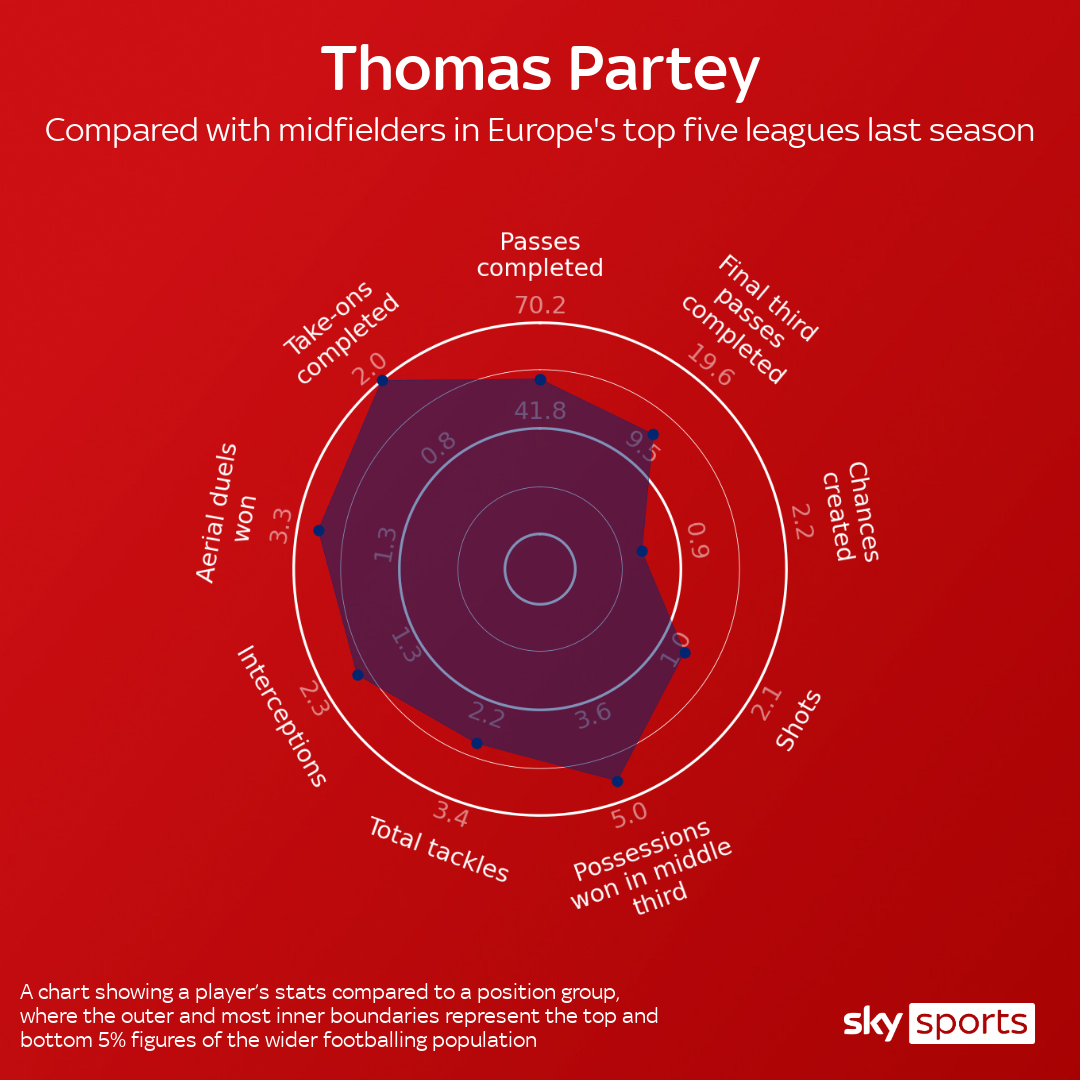 Partey soon cut out the mistakes and there was a concerted effort to bulk up physically too. "He is a physical marvel now but he didn't have the strength he has now back then," adds Oltra. "He worked hard on that, and on his stamina as well. His ability to withstand pressure improved and soon he was able to do more things with the ball, like trying long-range shots."

That eye for goal would become a feature of Partey's game - "he now scores six or seven times per season, which is great for someone who starts the build-up play and operates in front of the defence," notes Baños - but the circumstances were not easy at Mallorca. Instead of the anticipated fight for promotion, the season became a brush with relegation.

The exposure helped Partey's development, though, and the same was true of his season with Almeria in La Liga. It turned into another battle against the drop - a battle they eventually lost - but Partey made 32 appearances, scoring four goals and impressing again.

"He's a boy who understands football well," reflected former Almeria manager Sergi Barjuan in a recent interview with El País. "I used him as an attacking midfielder, a central midfield and even a centre-back."

Partey was developing well, his ability to slot into different positions a reflection of his tactical intelligence, but back at Atletico the competition for places remained fierce. In the two seasons after his loan spell with Almeria, Partey made only nine La Liga starts for Simeone's side and many of them came on the right rather than in the middle.

Another player might have sought an exit. Instead, Partey resolved to prove himself.

I think the thing he has improved most in recent years is his final pass. He is not just a defensive midfielder. He is now a more adventurous player

"Thomas has good people around him," says Baños. "His agents always give him good advice and he's a player who knew how to wait for his chance. There were players who were ahead of him and he understood that. He is very serious player and what's important is that he's also a team player."

Partey's versatility has long been a useful asset to Simeone, but last season, following the departure of Rodri to Manchester City, the Ghanaian was finally able to nail down his preferred position in the side, as a deep-lying central midfielder.

The role came with considerable defensive responsibility but Partey continued to contribute in an attacking sense too.

"I think the thing he has improved most in recent years is his final pass," says Baños. "He is not just a defensive midfielder. He is now a more adventurous player, with freedom in his movements and scoring ability."

Oltra sums it up succinctly: "He's a boy who does everything well."

His completeness could be seen throughout last season but it was particularly apparent during Atletico's Champions League campaign.

Partey, who shone in both legs of the last-16 win over Liverpool, made more tackles than any of his team-mates during Atletico's run to the quarter-finals and yet also ranked top for chances created from open play and passes into the final third. Only two Atletico players attempted more shots.

It's little wonder Simeone has come to value him so highly. "Thomas is an extraordinary player," he said last year.

More recently, the Atletico boss added Partey is good enough to play for "any of the best teams in Europe". "Thomas is the one who best understands his position," he said. "The transition from defence to attack, shooting, scoring, providing assists and playing passes between the lines."

Suited to the Premier League

"I'd seen him play for Atletico but I didn't realise how good he is," said Kieran Trippier, who joined the club from Tottenham last year, during a recent appearance on The Beautiful Game podcast. "He's unbelievable, his physicality, how he breaks up play. Technically he's got everything. I don't think he would have a problem with the Premier League."

It's a view shared by Baños, who admits he would be happy to see him join Arsenal having also worked as a scout for the Gunners.

"I have always said that he is a perfect player for the Bundesliga or the Premier League because of his style of play," he says. "He is a player who is ready and well-suited to succeed at a club like Arsenal."

Baños can testify to Partey's leadership as well as his talent. Baños is involved at Alcobendas Sport, a fourth-tier club based in Madrid in which Partey and his representatives have a stake and where, with the 27-year-old's guidance, talented young players from Ghana and other African nations are offered the opportunity to launch their careers in Europe.

"He wanted to help others do what he did," explains Baños, "to bring over players from his country and give them the opportunity to succeed in Spain."

Partey has certainly made the most of his own opportunities. There is no question about that. But those mentoring duties will have to take a backseat now that a move to Arsenal has materialised. It is time for Thomas Partey - "not fiesta!" - to take the next step of his journey in the Premier League.