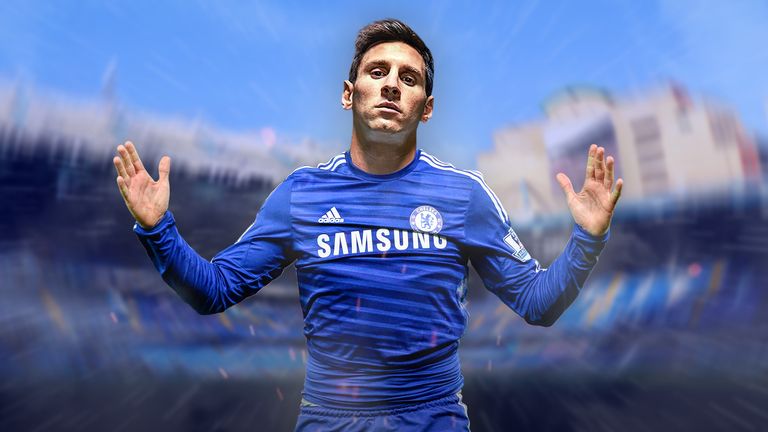 Lionel Messi at Stamford Bridge in a blue shirt? Chelsea were on the verge of pulling off the great coup in 2014, when Jose Mourinho charmed the Barcelona superstar to move to the Premier League, reveals Sky in Italy's Gianluca Di Marzio…

The 33-year-old has been tempted into a move away from La Liga more than once, most recently in August, when his €700m release clause priced him out of a move despite an official transfer request.

But in 2014, Chelsea were ready to activate that release clause which amounted to €250m at the time, and pay the Argentine a net salary of £50m per season to sign him - something which Di Marzio considers as "the biggest unknown tale in the transfer market".

Talks unfolded in the middle of the tax evasion probe opened by the Spanish government against Messi's family in 2013, which by the player's own admission made him consider leaving the country.

In his latest book Grand Hotel Calciomercato, a diary of the untold stories of the transfer market, Di Marzio reveals how a "box office" face-to-face video call with Jose Mourinho persuaded Messi to make the switch.

However, it was the involvement of his father and agent Jorge and former team-mate Deco that made the deal collapse like a "soap bubble that bursts and vanishes in thin air" despite personal terms being agreed.

It's also claimed Real Madrid president Florentino Perez tried to secure Messi on the same basis a year before Chelsea, but the Argentine turned down the approach because of his status at Barcelona.

Read the full excerpt below to discover just how close Messi came to becoming a Blue...

How Chelsea almost pulled off the great coup

Now close your eyes and picture this: Messi to Real Madrid, boom. The biggest coup of all time. Indeed, Florentino Perez tried to pull it off in 2013, sending a few of his most trusted representatives to make an enquiry for their most feared rival.

The plan was expected to be carried out via the payment of his release clause - 250 million Euros to be paid, in cash, to Barcelona. Perez could have used that same fee to restructure the Bernabeu, but instead he allocated it to attempt bringing Messi to Madrid.

However, the initial approach wasn't the best - actually far from it. The men sent to enquire about Leo's availability were rebuffed quite impolitely by his camp.

"I'm not coming to Real, you're wasting your time!" he said, without a 'thank you for your interest' or, indeed, without exploring the financial aspect and the possible monumental wages involved.

Florentino, one of the most powerful men in Spain, did not appreciate it. It may have been a coincidence, but a few months later a long tax war broke out against the Argentine's family and they were eventually forced to fork out 53 million Euros.

A tax war against the champion. The same misadventure occurred to Cristiano Ronaldo, who boarded a flight to join Juventus. Even Messi had that sort of tummy ache, and he seriously thought about saying goodbye to Barcelona and the country that adopted him.

To go where? To Chelsea! For two essential reasons: the charm of London and the respect for Mourinho, Blues boss at the time. It's January 2014, we're right in the middle of that tax fraud probe, with the World Cup in Brazil edging ever closer.

His temptation is sparked by rage towards the Spanish tax. A few months later, the feeling is materialised in the form of a phone call with former team-mate Deco, now an agent after recently retiring and spending two years at Stamford Bridge with [Roman] Abramovich at the helm.

Messi also asks for help to another friend in his camp, someone who personally knows the right people to kickstart the process and pull off the great coup. Deco promises Leo he will meet Abramovich soon, while his friend goes to Mourinho to try and make him fall in love with the staggering prospect.

A lunch date is set up in London, at Mourinho's mansion. On one side, the three intermediaries that talk through the project and its feasibility, on the other side the Chelsea boss, who still struggles to believe what's going on.

So, what can you do to make him lose all doubt? A FaceTime call, with Mourinho and Messi face to face. Box office stuff.

Two footballing legends one in front of the other, who despite being eternal rivals, have always had a secret fling to get together. Mourinho's living room becomes the theatre of a candle-lit aperitif where the two exchange flirtatious looks and goo goo eyes.

"How you doing, champ?" the coach breaks the ice. "They just told me about your wish: well, you don't know how may sleepless nights I have had, trying to find a way to stop you. I've tried to employ countless strategies it would all work until you would find the winning dribble and score. You're the best, full stop."

So the strategy starts turning into a cunning, astute manoeuvre, worthy of the best Mourinho.

"So, you know what I'll tell you? That you need to stay exactly where you are!" he says, sending shock-waves throughout the room and the people around him, who were already tasting their slice of the cake of millions of Euros in agent fees.

On the other side of the call, the look on Messi's face changes drastically. He thinks about a hidden camera and a well-executed prank, he underestimates the Special One's trickery. But the latter insists.

"Don't leave, they'll build you a statue there, stay in Barcelona. That is the best possible place for a number one like you. However…" here it is, the screamer from the ace in the dugout, a spell-binding counter-attack that changes the complexion of the game.

"If one morning you wake up, you have your breakfast at the training ground but the coffee doesn't taste the same, the sky suddenly turns grey, you don't like your car anymore, you feel sad on your way home, you're not happy, your family is not happy, well, in that dark and gloomy moment of your life… then yes, you will have to open the gate of happiness again. And behind that gate, you will find me, Jose Mourinho, waiting for you!"

Checkmate. Messi laughs and he's already crazy about his new suitor, the only thing that's missing is the ring to celebrate the wedding proposal.

The plan now sees a meeting in the Chelsea headquarters, with the powerful deal-breaker Marina [Granovskaia] alerted by her boss Abramovich. A 20-metre long Mercedes chauffeurs the two intermediaries, as one starts looking out of the window to spot nice houses to buy with all the money he's going to earn in agent fees.

The car stops in front of Stamford Bridge and before the two step out Leo, buzzing for the red roses handed to him by Mourinho, makes himself heard.

"With Mourinho, for how he's spoken to me, I can win whatever I want: he's a winner, go ahead and close the deal."

Perfect. The plan works, it seems like there is no obstacle in sight. It's 3pm, the meeting with Granovskaia begins and she does not blink, as she smells the scent of a deal which would change the course of history.

A release clause of 250 million Euros? Check. Stellar wages? Check. Image rights? Check. As for the details, Leo's dad Jorge Horacio, who manages the interests of his six-time Ballon d'Or winner son, would be soon involved.

Here it is, the potential big sticking point: Jorge Messi does not ask too many questions but back then he was kept in the dark of Leo's wish - and he did not know about the plan, put in motion by somebody else, to prise him away from Barcelona.

It's now July, Marina is preparing the detailed offer, while Mourinho is grinning from ear to ear at Cobham. Before he gets the afternoon training underway, Cesc Fabregas - who just signed for Chelsea from Barcelona - approaches him celebrating as if he just scored a goal.

"Gaffer, Leo wants to come here! It's incredible! We've been friends for as long as I can remember, it would be unbelievable… Deco called me to tell me and you, as you're not picking up his calls," and here it is, the other cog in the wheel that can make the deal collapse. Deco, seduced and then abandoned, in this deal.

"Yes, I know everything. I even talked with Messi the other day" Mourinho replies, without thinking about the catastrophic consequences. Fabregas warns Deco of the contact between the two parties, and the situation spirals out of control as Deco decides to snitch with the message instantly delivered to Leo's father and agent.

It should have never happened. So, while Chelsea officially gives the intermediaries the green light to the player's request of £50m per season plus 70 per cent of image rights, disaster strikes. Dad Jorge calls up Leo asking for an explanation.

"I don't know what you're talking about, I swear," says the Blaugrana No 10, denying phone calls and desires, goodbye plans and English projects.

A soap bubble that hits the floor, bursts and vanishes in thin air, without leaving the slightest mark, just like it never happened. It was like a surprising back-pass when you're about to tap into an empty net. Not very Messi-like, but maybe not that surprising from Leo, knowing the dynamics of a family where the heavy weight of the father is universally recognised.

"If he's telling me to, then I'll sign with my eyes closed," Messi said to the Spanish magistrates during that tax probe. Now you could probably add "I would never be brave enough to do something without involving him," let alone admit a hidden truth.

Abramovich came to terms with it, swallowing a bitter pill, although he never likes losing. The furious intermediaries that were flirting with the coup were forced to flee and take their eyes off those huge flats in London's richest areas. And Messi stayed exactly where he was, renewing his deal in Barcelona every year, one pay rise after the other.